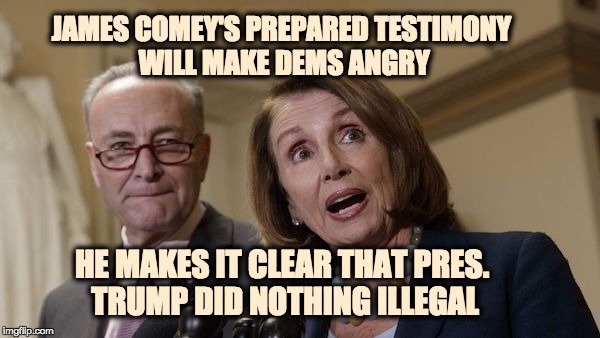 Former FBI Director James Comey released his prepared testimony Wednesday, the day before he is scheduled to testify before the Senate Intelligence Committee. According to his prepared document (embedded below), President Trump did not pressure him to stop the Russian investigation, nor did he pressure him about Gen. Flynn (although he did ask him about Flynn). Additionally, Trump was accurate when he said that Comey had assured him that he was not personally under investigation.

Among the issues issues addressed by Comey:

Below is the entire Comey document, the bottom line is that Donald Trump did nothing illegal. He knew that he was not under investigation and only asked that the FBI director make it public.  The day after Flynn was fired the President asked Comey to throw him a break…it was not a demand, and while it may have been out-of-line at no point did Trump ask him to stop the Russian investigation. And Trump did request loyalty, he seemed to accept Comey’s answer which was a promise of honesty.

In the end the Democrats will be very disappointed because Comey’s statement described a president who did nothing wrong.