If Comey Letter Story Is True, Comey Committed A Crime 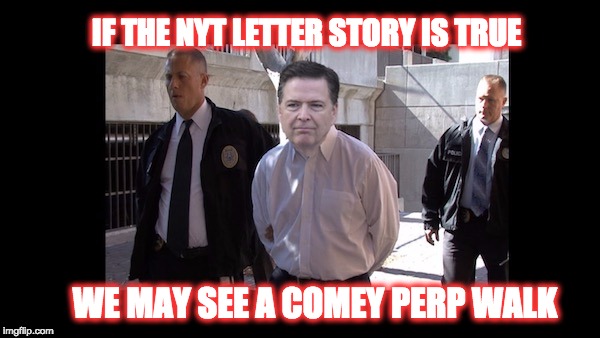 Yesterday’s “dinner-time revelation” by a MSM anonymous source was a memo by former FBI director James Comey that was read over the phone to a NY Times reporter. The letter detailed an Oval Office conversation Comey supposedly had with President Trump where the president Trump to get Comey to stop investigating General Flynn as part of the Russia investigation, “I hope you can let this go,” the president was said to tell Comey.  But If the Comey letter story is true, and the former FBI head really believed that the president was trying to strong-arm him into dropping the investigation…James Comey may end up in Jail.

There are three possible outcomes of the NY Times story.

If the third option turns out to be true, former FBI director Comey is in big trouble. You see obstruction of justice is a crime and..well…according to the U.S. criminal code:

Title 18 U.S.C. § 4. Misprision of felony. Whoever, having knowledge of the actual commission of a felony cognizable by a court of the United States, conceals and does not as soon as possible make known the same to some judge or other person in civil or military authority under the United States, shall be fined under this title or imprisoned not more than three years, or both.

Under the law, Comey is required to immediately inform the Department of Justice of any attempt to obstruct justice by any person, even the President of the United States.  Failure to do so would result in criminal charges against Comey.  (18 USC 4 and 28 USC 1361)  He would also, upon sufficient proof, lose his license to practice law.

So, if Comey believed Trump attempted to obstruct justice, did he comply with the law by reporting it to the DOJ?  If not, it calls into question whether the events occurred as the Times reported it.

Obstruction requires what’s called “specific intent” to interfere with a criminal case.  [and we know how hard it is to prove intent to Comey] If Comey concluded, however, that Trump’s language was vague, ambiguous or elliptical, then he has no duty under the law to report it because it does not rise to the level of specific intent.  Thus, no crime.

There is no evidence Comey ever alerted officials at the Justice Department, as he is duty-bound to do.  Surely if he had, that incriminating information would have made its way to the public either by an indictment or, more likely, an investigation that could hardly be kept confidential in the intervening months.

Comey’s memo is being treated as a “smoking gun” only because the media and Democrats, likely prompted by Comey himself, are now peddling it that way.

So something tells me that if the letter does exist, Comey will testify that Trump was not trying to obstruct justice.

Is this a satire? Or is it just as true as some of the mainstream media reports.