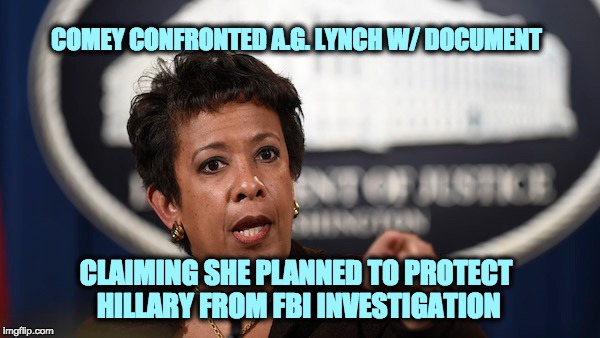 Circa is reporting that one of the items James Comey told Congress in closed session last week was his confrontation with  AG Loretta Lynch about her possible political interference with the Hillary Clinton investigation. Comey even showed Lynch a sensitive document claiming the AG was about to tank the investigation, according to sources who were directly briefed on the testimony.

This confrontation was not related to the one Comey discussed in the public hearing last week where Lynch ordered the FBI  Director not to refer to the probe about Clinton’s handling of classified emails as an “investigation” but instead to use the Clinton campaign language and call it a “matter.”

“That concerned me because that language tracked the way the campaign was talking about the FBI’s work and that’s concerning,” Comey testified.

Apparently in multiple private sessions over the last Comey detailed to Congress the elements of  a second, later confrontation with Lynch. Unlike the conversation he related in the public hearing, this one occurred just before his speech where Comey basically said Clinton was guilty but she wouldn’t be charged.

Comey told lawmakers in the close door session that he raised his concern with the attorney general that she had created a conflict of interest by meeting with Clinton’s husband, the former President Bill Clinton, on an airport tarmac while the investigation was ongoing.

During the conversation, Comey told lawmakers he confronted Lynch with a highly sensitive piece of evidence, a communication between two political figures that suggested Lynch had agreed to put the kibosh on any prosecution of Clinton.

Comey said “the attorney general looked at the document then looked up with a steely silence that lasted for some time, then asked him if he had any other business with her and if not that he should leave her office,” said one source who was briefed.

Comey “took that interaction and the fact she had met with Bill Clinton as enough reason to decide he would not allow the Justice Department to decide the fate of the case and instead would go public” with his own assessment that the FBI could not prove Mrs. Clinton intended to violate the law when she transmitted classified information through her private email and therefore should not be criminally charged. Another source said the “tarmac meeting was the public excuse for not going to Lynch when all along there was other evidence that was more concerning to Comey.”

The sources also said that Comey’s testimony in private conflicted with recent media reports in the news media suggesting the FBI had intercepted a report about an email exchange between  Democratic National Committee Chairwoman Debbie Wasserman Schultz and Leonard Benardo, an official at George Soros’ Open Society Foundation. In the email described in the document, Debby downer told Benardo that “then-Attorney General Loretta E. Lynch had privately assured a senior Clinton campaign staffer named Amanda Renteria that the email investigation would not push too deeply into the matter.

The report intercepted by the FBI turned out to be fake and issued by the Russians. But current and former officials have said that Comey relied on the document in making his July decision to announce on his own, without Justice Department involvement, that the investigation was over. That public announcement — in which he criticized Clinton and made extensive comments about the evidence — set in motion a chain of other FBI moves that Democrats now say helped Trump win the presidential election.

The Circa report doesn’t agree with the one above about the fake Russian document:

“Comey’s account to Congress does not sync with those media reports,” one source said, declining to be more specific. In public, Comey also seemed to suggest as much, saying some of the reports about why he went public with the email case findings were “nonsense.”

If Comey’s account is true Loretta Lynch tried to interfere with the investigation and she should be investigated for obstruction of justice. And as much as the Democrats like to claim the Russians helped Trump win the election, it seems the real truth is the Department Of Justice had its fingers on the scale for Hillary Clinton.