He’s imploring us to work together to solve the UFO “problem”. 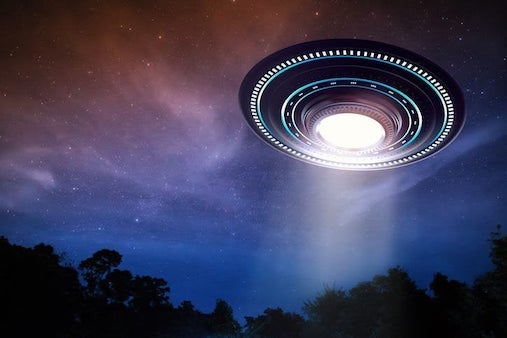 This has been a week filled with news of the otherworldly variety, as a number of major, spooky bombshells have been dropped on the American people on the subject of UAP’s, better known as UFOs to most of us. come clean on UFOs

Long-running news program 60 Minutes kicked the week off on Sunday with a report on the Pentagon’s newly-forthcoming nature in the realm of unidentified aerial phenomena, in which the nation heard, matter of factly, that the DOD understand that there are crafts of unknown origin flying around sensitive military assets belonging to the USA.  And, wilder still, that its seems to happen fairly regularly.

This coincided with the release of stunning footage from the Navy, showing just such a craft performing unfathomable maneuvers before simply dipping into the ocean.

Former Commander in Chief Barack Obama then told a late-night TV host that, yes, this is all real, and we really don’t know what we’re dealing with.

And this is the scary part, given that we are clearly outgunned here, for lack of a better term.

That’s why one investigative filmmaker who has worked to bring much of this information to light is now imploring the world’s governments to pool their resources.

Jeremy Corbell is best known for his documentary, “Bob Lazar: Area 51 & Flying Saucers.” He is also one of the most vocal proponents on further investigation into the topic of UFOs, working closely with journalist George Knapp, to spread awareness on the subject. For both men, this moment has been a long time coming.

“UFOs are real and they fly with impunity within our restricted airspace.” Corbell said in a video interview with Fox News. “Finally people are acknowledging that this is an issue, that there is a UFO problem.”

Now that the existence of UFOs is widely accepted and intelligence agencies have admitted to maintaining UFO programs despite decades of secrecy, Corbell says, leaders in the science, technology, aerospace and astrophysicists fields must search for answers to the pressing questions.

“We need to know who operates these vehicles, what type of propulsion do they have that could be transmedium, and what is the intent of the operators of these vehicles?”

Corbell’s characterization of the UFO phenomenon as a “problem” has been gaining traction, especially now that the DOD is openly admitting to the world that our nation is unable to compete with whatever these things are