Colorado Gun Sales Up 100% in One Week 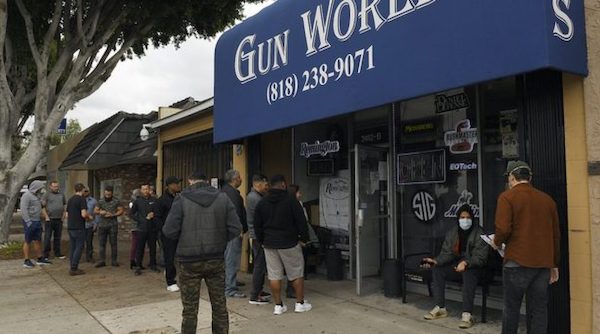 In one week, Colorado gun sales jumped by 100%. Gun store owners are floored, and many are simply out of selection and ammunition as they wait for new shipments. Ammunition sales in the US have shown a 300% increase. In one week’s period of time, over 14,000 firearms were sold in just Colorado alone. The background check system is almost at a standstill in that state, and likely in many other places.

There were 14,604 background checks requested between March 10 and March 16.  Last year during the same period, there were 7,357, according to the Denver Post. It has overwhelmed the system in Colorado.Fox31 reported,

The FOX31 Problem Solvers also found the other fallout to all the gun sales is the time it takes for the CBI to conduct the necessary background checks on buyers. A couple of weeks ago, that would have taken about 45 minutes to an hour, with about 97% approved. Now, buyers will have to wait two to three days for the background check and final sale to be complete.

“The demand has created a current queue of nearly 5,000 checks awaiting processing,” the CBI said in a written statement.

The agency said it implemented the following changes to keep up with demand:

“The panic started with toilet paper, then moved to food. Then, obviously when people see bare shelves, then obviously they want to make sure they will be protected if it gets any worse.” Joe Oltmann, owner of DCF Guns in Castle Rock, CO

So what about those “emergency declarations?”

Emergency declarations that attempt to limit or suspend your 2nd amendment rights have been stopped in courts before. Gov Polis’ declaration is no different, and someone should have removed the firearms portions beforehand. He, too, can “limit or suspend” firearms and alcohol sales. Good luck with that on those 14,000 firearm purchases made in one week.

Most of the declarations were written in the 1960s and are entirely unenforceable today. Some cities are recognizing that fact. New Orleans, LA, Champaign, IL, and Gov Jared Polis in Colorado should take note of this court ruling:

“While the bans imposed … may be limited in duration, it cannot be overlooked that the statutes strip peaceable, law-abiding citizens of the right to arm themselves in defense of hearth and home, striking at the very core of the Second Amendment.” Senior U.S. District Judge Malcolm J. Howard ruling on a North Carolina Suit in 2012.

Some cities are actually removing the portions of these 1960s declarations that deal with firearms and alcohol, such as Mayor Tim Keller of Albuquerque, NM, whose statement removed the firearms/alcohol portion.

KOB reported from a statement by Keller’s office,

“The legislation being considered tonight does not ban gun sales, confiscate guns, prohibit liquor sales, nor does it implement a curfew or close streets, and the Mayor’s declaration will not either.”

Municipal and state governments run by either Democrats or Republicans should be especially wary of any declarations of emergency that would cause harm to the 2nd amendment, particularly during times of crisis. With Colorado gun sales hitting all-time highs, the same situation is likely that the same situation is occurring around the country.