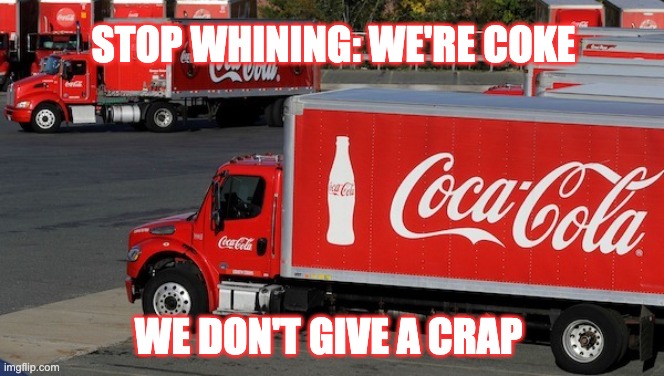 Last year, Coca-Cola huffed and puffed about evil conservatives in Georgia trying to secure their elections. Still, the company is uninterested in Russia’s attacks on Ukraine and China’s genocide of the Chinese.

You’ll recall that Coke’s leadership got all up in high dudgeon when the GOP-led state legislature passed new rules to tighten the state’s election laws. Coke claimed — without evidence — that the laws were meant to “suppress” the vote of liberals.

It is a lie, of course. Indeed, in the elections following the enacted laws, the number of minority voters increased. AND two Democrats got elected to the U.S. Senate.

The same Coca Cola gave a presentation to their employees asking them to be less white:

🚨🚨🚨 BREAKING: Coca-Cola is forcing employees to complete online training telling them to "try to be less white."

These images are from an internal whistleblower: pic.twitter.com/gRi4N20esZ

In other words, Coke is full of liars and bigots.

As the Washington Examiner noted:

Coca-Cola is eerily silent on Russia’s invasion of Ukraine. Russia is one of the company’s most profitable markets, as the soda giant operates out of the country as Swiss-based bottler Coca-Cola HBC. It announced last Tuesday they had contingency plans to cope with the crisis, which included stockpiling ingredients to limit any disruption in their massive Russian market.

Coca-Cola HBC gets approximately 21% of its volume from Russia and Ukraine, where it also has operations. The workers in Ukraine were sent home last week.

Unlike other U.S. companies, such as Harley-Davidson, energy giants BP and global bank HSBC, Disney, and AerCap that all joined a mounting list of companies exiting Russia — an exodus with real consequences on the Russian people and their economy that helps puts the squeeze on Putin’s relationship with his people — Coke has done nothing at the time of this publication.

They have also not issued any statement condemning Russia’s actions in Ukraine at the time of this publication, nor have they tweeted anything that even remarkably resembles criticism of Russia’s actions going all the way back to before Russia crossed into Ukraine several days ago.

In 2007 Coca Cola Coca-Cola bid on a property in Egypt that was wrongly taken away from a Jewish family due to the Antisemitism. of then-president Nassar. Coke leased the property from the family for years, so they can’t claim they didn’t know. After it was stolen, Coke bid on and purchased it despite being recontacted by their former Jewish landlord, the Bigios, and other organizations. Eventually, Coke owned 40% of the stolen property and ignored claims that they knowingly purchased stolen property. Instead of looking to compensate the Bigios, they had their corporate attorneys fight their claims with all of their might. The last article I could find on the internet was in 2018 and claimed the issue was still unresolved. So big corporate Coke and its heavy-duty lawyers continued to steal from this family for at least ten years and may still be fighting.

While a case can be made that Coca-Cola is not fond of protecting against illegal voting,  Ukrainians, Chinese prisoners, or even Jews. The truth is that the examples above prove that Coke is a company with no morals. The company will follow the political winds, whether right or wrong. Any of their promises to be “an outstanding corporate citizen in every community we serve” is a lie.

Parts of this post were first seen at Ipatirot.