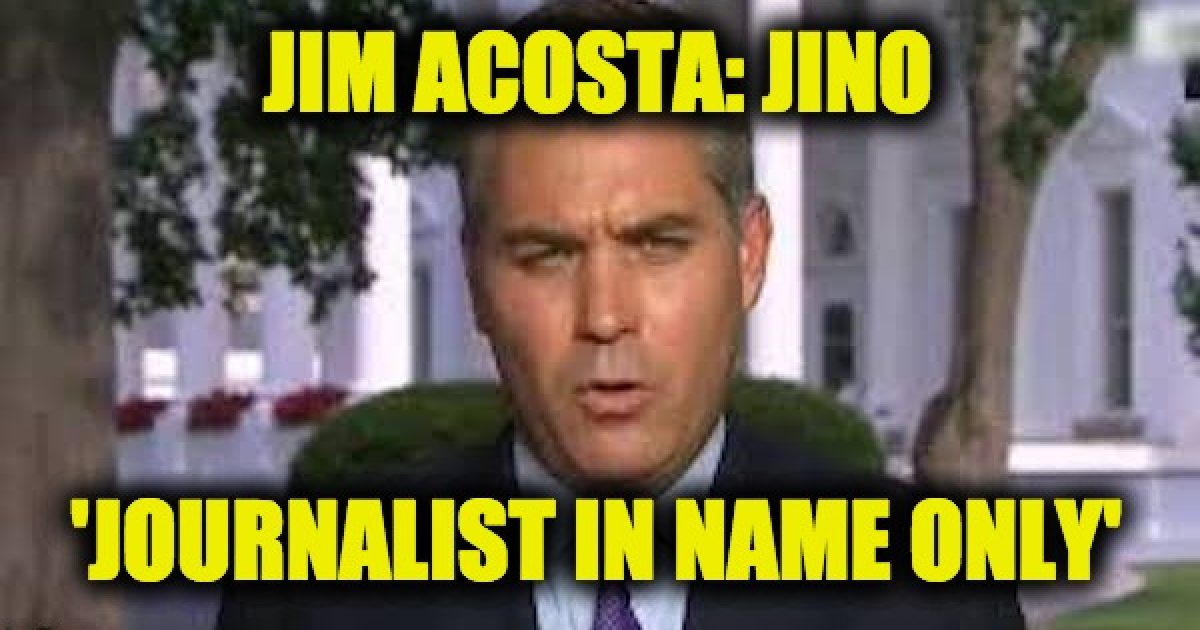 CNN’s Jim Acosta thinks he knows why many Americans agree with the president that some of the MSM spew fake news. In his not so humble opinion, Trump is faking his opinions and the public is too crazy or too stupid to know the truth. CNN’s designated whiner told Variety:

“The problem is that people around the country don’t know it’s an act,” the reporter said. “They’re not in on the act, and they take what he says very seriously, and they take attacks from [former White House press secretary] Sean Spicer and Sarah Sanders and what they do to us on a daily basis very seriously. They don’t have all their faculties in some cases — their elevator might not hit all floors. My concern is that a journalist is going to be hurt one of these days.”

Acosta feels entitled, he is from CNN, therefore, he gets to ask a question where and whenever he wants. After a daily briefing in March he said to press secretary Sarah Sanders as she was leaving the room:

“Sarah, this is the third briefing you have not taken a question from CNN”

I missed the amendment to the US Constitution that says CNN gets a question at every press conference.

Perhaps Acosta is low on the list because many times his questions aren’t an attempt to get important news from the Administration but to editorialize and/or express his own talking points about an administration policy. He loves pushing his opinion that the President is racist. For example when the POTUS  was having a photo op in the White House with President Nursultan Nazarbayev of Kazakhstan and took a few questions:

“I want them to come in from everywhere… everywhere. Thank you very much, everybody,” Trump responded as Acosta continued to bark questions.

“Just Caucasian or white countries, sir? Or do you want people to come in from other parts of the world… people of color,” Acosta shouted.

Trump then pointed directly at Acosta and simply said, “Out!”

Or pushing the idea Trump is sexist:

“Mr. President, what did you mean when you said that Kirsten Gillibrand would do anything for a campaign contribution?” he asked at the end of a December bill signing with the president.

Hey Jim how many politicians have you heard being accused of “doing anything” for a campaign donation?  It means they will change their stance on policy, or sponsor a bill that helps their business.

Remember when Acosta tried to blame the GOP for the “Schumer Shutdown” ignoring the fact that a bill couldn’t even come to the floor without sixty votes? Mulvany had to remind him how the Senate works:

Acosta: “How can it be the Schumer Shutdown when Republicans control the White House, the House, and the Senate?”

Of course, Acosta knew it took sixty votes and there are only 52 GOP senators, but he wanted to make a political point.

Acosta’s most recent attempt at well…being Acosta happened during the annual White House Easter Egg Roll, which brings kids from all over the country for an apolitical day for a day of fun. President Trump was sitting a table, coloring with his 12-year-old son, Barron, and other kids when Acosta shouted:

Mr. President, what about the DACA kids? Should they worry about what is going to happen to them, sir?”

Trump responded, saying Democrats let them down, and continued coloring with the children. The response wasn’t good enough for Acosta, the CNN star who spars with Trump and his surrogates on a regular basis.

Now CNN’s unprofessional White House reporter has gone even further. Instead of shouting questions that editorialize against the president’s policies, he is arrogantly trashing the folks his network bosses want tuning into the channel so they can generate more advertising revenue.  And if President Trump is nothing but an act, why is he getting done what he promised?

Jim Acosta’s entitlement and his arrogance towards news-watching Americans an attitude shared by others at the network is a big factor in the once mighty CNN’s collapse in ratings to the point where it not only trails Fox and MSNBC, who are first and second in the rankings, but has fallen to the point where it is no longer in the top ten basic cable networks (#11).

Allow me to suggest that despite Acosta’s suggestion the “crazy” or “stupid” people are the ones who believe Jim Acosta is actually practicing journalism. His antics must drive the real journalists at CNN crazy.