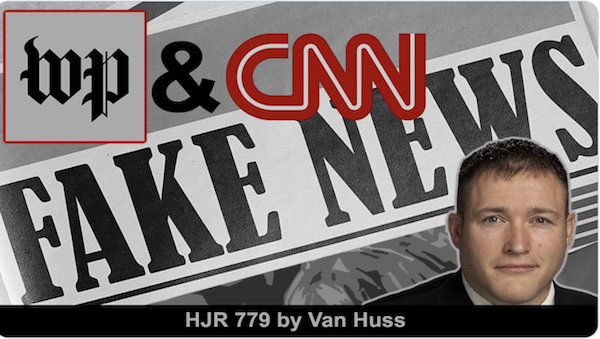 How ironic is it that the ‘news’ agencies CNN & WaPo hellbent on significant government control over every area of our lives are being specifically named as fake news sources… by the government. CNN & WaPo: Fake News

Why would they be singled out for treatment as fake news?

What are the consequences of this Bill if it passes?

Here’s what Tennessee State Rep. Micah Van Huss had to say about his Bill.

“Over 60% of Tennessee voters voted for President Trump, and CNN and The Washington Post denigrated them for doing that,” he told WJHL-TV, the station reported.

A copy of the resolution posted on the Tennessee General Assembly website takes aim at each of the outlets over their respective coverage of Mr. Trump and makes specific references to reporting that Mr. Van Huss characterized as comparing the president’s supporters to cult members.

This is one lawmaker that is tired of his party getting kicked around like a ragdoll by supposedly ‘impartial’ national news sources. And he’s publicly calling them out for it.

The introduction to the resolution: A RESOLUTION to recognize CNN and The Washington Post as fake news and condemn them for denigrating our citizens.

The text of the Bill, HJR0779, includes a dozen specific ‘whereas’ clauses supporting his central assertion:

Here is a small sampling of those 12:

WHEREAS, on October 3, 2019, an editor for The Washington Post wrote that President Donald J. Trump has cast a spell on the Republican Party and suggested that Trumpism is cult-like; and

WHEREAS, on November 24, 2019, a CNN host suggested that Trump supporters belong to a cult and that our president is using mind control; and

WHEREAS, suggestions of cult-like behavior by President Trump’s supporters substitute a value judgment in place of a sorely needed argumentative analysis of how voters generate their own political views; and

WHEREAS, to describe the entire Republican Party as a cult led by President Trump is problematic: If journalists are going to refer to the party as a cult and its supporters as cultists, they must define what “cult” means; otherwise, they are assuming that a cult is some obvious phenomenon and everyone knows what the word means; and

WHEREAS, the cult diagnosis draws a line between Trump opponents and Trump supporters, and it oversimplifies the way people think and feel about their own beliefs and those on the other side of that line; and

WHEREAS, suggestions that supporters of President Trump are exhibiting cult-like behavior isn’t helpful in an era of significant political polarization; now, therefore,

…it leads us to the proposed resolution:

BE IT RESOLVED BY THE HOUSE OF REPRESENTATIVES OF THE ONE HUNDRED ELEVENTH GENERAL ASSEMBLY OF THE STATE OF TENNESSEE, THE SENATE CONCURRING, that the State of Tennessee recognizes CNN and The Washington Post as fake news and part of the media wing of the Democratic Party. BE IT FURTHER RESOLVED, that we condemn them for denigrating our citizens and implying that they are weak-minded followers instead of people exercising their rights that our veterans paid for with their blood.

If you want to see how it develops, here’s where you follow along.

The State of Tennessee recognizes CNN and The Washington Post as fake news and part of the media wing of the Democrat Party.

I’ve filed HJR 779 on behalf of a constituency that’s tired of fake news and Republicans who don’t fight.