Sometimes its comical when writers try to find deep meaning in things.  Sure its an appropriate exercise in the cases of biblical writings, or great literature such as Shakespeare.  But when they try to find the meaning of life in the latest episode of South Park, or Archie Comics writers have fallen into the ridiculous.

Yesterday, while watching The B-Cast internet program, Scott Baker Managing Editor of The Blaze, read a May 5th article posted on the CNN website that took this practice to a new low. They came up with something so ridiculous, that it makes one wonder if the network intends to replace the rich deep voice of James Earl Jones in their (This is CNN) tag to the high squeak of Pee Wee Herman.

The article in question was based in the now famous picture of the White House situation room during the raid on the Bin Laden compound.

The writer ( John Blake) took this picture and decided that it had a powerful subliminal message about the history of race relations in America, while showering so much praise on the President that the reader will wonder why the Pope hasn’t yet granted him Sainthood (must be a racist!).

Most commentators have focused on the historic nature of the photo: Obama staring at the screen with a grim intensity; Secretary of State Hillary Clinton, covering her mouth to repress her reaction — the epicenter of U.S. military power hunting down its most hated foe.

But look deeper and that photo becomes historic in a more subtle way. It’s a snapshot of how much this nation’s attitudes about race, women and presidential swagger are changing, several scholars and historians say. 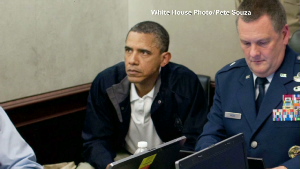 When reading this opening I wondered if he was pointing out that all the key players were sitting around the table, but the man who should have been a key player, the President was sitting off in a corner to the side.  Kind of made one suspect either he wasn’t so involved, he was being punished, or because Blake mentioned race, he was suggesting that the all-white crowd around the table forced the African-American President to sit in the corner

“The photo is visually suggestive of a new American landscape that we’re still crossing into,” says Saladin Ambar, a political science professor at Lehigh University in Pennsylvania.

“When Obama was elected, there were some people who thought that we had crossed a racial threshold,” Ambar says. “What his presidency is revealing is that there are many crossings.”

The photo crosses one threshold of race in its unusual framing of an African-American man threatening violence, one black commentator says.

I know what you are thinking, but no this isn’t a satire, this guy is serious.

For much of U.S. history, the black man has often been portrayed as the threat to America’s safety — the angry man, the thug, the one you cross the street to avoid, says Cheryl Contee, co-founder of Jack & Jill Politics, a blog focused on current affairs from a black perspective.

Huh! He is sitting in the corner, if anything the General at the head of the table seems like the “protector.”

There’s no historical precedent for this image, she says. White Americans now see a black man not just as their president but their “protector in chief,” Contee says.

I wonder if Ms Contee ever heard of a man named Colin Powell. He was the Chairmen of the Joint Chiefs of Staff during the first Gulf War (it was in all the papers).  President Obama may be seen as the protector-in-chief (I doubt it but I am playing along here), but long before this President was seen that way, Colin Powell was seen that way.

Podair says Obama has always been careful to avoid the angry black male stereotype in his public persona, but has acquired another image — that of detachment, even weakness.

Kind of like the way he looks in the situation room picture?

The photo of Obama hunkered down with his national security team watching the stalking and killing of bin Laden solves both problems, Podair says.

“He can now appear strong without being threatening. After all, he’s on our side. Obama can now take up his white predecessors’ mantle of ‘protector in chief,’ ” Podair says.

It’s not certain how long that mantle will stay attached to Obama, but at least one political scientist says he’s already seen the photo’s impact.

“This is one of the rare times that Tea Party supporters have referred to Obama as President Obama,” says Ari Kohen, an associate professor of social justice and political science at the University of Nebraska-Lincoln.

Mr. Kohen hasn’t been to many Tea Party rallies, because that has to be one of the dumbest statements I have ever heard come out of the mount’s of an academic.  What does he think Tea Partiers have been calling President Obama?  The former Senator from Illinois? Ralph? Maybe Ari is feeling bad because the Tea Partiers do not call the POTUS the same thing the progressives do, “Our Lord and Savior.”

But it gets better because in case you did not realize this, the picture is a tribute to woman’s rights.

The photo also breaks ground when it comes to women, others say.

The image is laced with testosterone: a crowded room full of powerful military and political men, some with medals bristling across their uniforms, gathered to drop America’s hammer.

Some online viewers compared it to the photos of D-Day during World War II. Another said it was a portrait of “the nexus of power in the Western world.”

But there were no iconic shots of women storming the beaches of Normandy or raising the flag at Iwo Jima.

Go back and examine the defining historic photos of American military might in action, and women are absent, historians say.

A glance at the now famous photos of President John F. Kennedy and his staff during the Cuban missile crisis is typical, says Ambar, the Lehigh University professor.

The photos show square-jawed men in crew cuts and uniforms surrounding Kennedy in the White House. You can practically smell the Aqua Velva in those old black-and-white photos.

Note: I dug up that picture on the internet, all I could smell was the peanut butter sandwich I just finished eating.

“But if you go back and look at the Cuban missile crisis photos and the movies about it, there’s no women,” Ambar says. “In the movie ‘Thirteen Days,’ the only woman in the film was Kennedy’s secretary.”

I have already emailed  Saladin Ambar to remind the Professor that “Thirteen Days” was simply historic fiction,  the movie JFK did not really solve the Kennedy shooting, and there was never an Aladdin who had a ten foot tall blue genie who sounded just like Robin Williams.

Yet you see two powerful women in the Situation Room photograph — Clinton and Audrey Tomason, director for counterterrorism, who is straining to see from the back. Their inclusion shows how far women have come, Ambar says, even though Clinton’s response is ambiguous because she’s covering her mouth in what looks to be alarm.

“God only knows what she’s seeing on the screen,” Ambar says. (Clinton has since said she was trying not to cough.)

Lets see, there are two women in the picture, one is at the very back of the crowd in teh very back of the room, the other is sitting at the table looking as if she is about to scream out in horror.  What it says to me about women is they can’t control their emotions or men still don’t let them in the room.

Lori Brown, a sociologist, says showing two women at the center of American military power is noteworthy, but Clinton’s gesture undermines some of its impact.

“Women are often more physical in their emotional responses and in a ‘power situation’ it may not seem as acceptable, but times are changing and the Situation Room needs to change, too,” says Brown, a professor of sociology at Meredith College in Raleigh, North Carolina. “Her emotions were more obvious, but I am sure many of the men in the room felt the same way she did.”

But then the writer gets back to his love letter to the President.

The photo finally crosses the threshold of what may be called presidential swagger, historians say.

American presidents have traditionally sold themselves as our alpha male. Theodore Roosevelt went safari hunting; Ronald Reagan cleared brush at his ranch in a cowboy hat; George W. Bush did his “Top Gun” imitation when he donned a flight suit on the deck of an aircraft carrier.

Swagger? The guy is sitting down in the corner, his face kind of pale, looking concerned. Sorry, THAT ain’t swagger.

“There’s a certain kind of machismo and swagger that Americans expect their president to reflect,” says Clarence Lusane, author of “The Black History of the White House.”

Projecting that presidential swagger was so powerful that it obscured some presidents’ serious illnesses, such as President Franklin Roosevelt’s polio and Kennedy’s hobbling assortment of ailments, including a bad back, Lusane says.

“They were both very ill. Kennedy could barely stand for two hours. But they never let those images out because they had to project toughness. Obama, though, is a different animal.”

The photo shows why.

If someone didn’t know who Obama was, he or she probably couldn’t tell that he was the president in the room, some scholars say.

“He’s not in the tallest chair,” says Brown, the sociology professor at Meredith College. “He’s not the center of attention. He’s not even in the middle of the room.”

Yet Obama’s willingness to be photographed without the typical Oval Office swagger gives birth to a new type of swagger, says Contee of Jack & Jill Politics.

AH! Now I get it, looking pale and concerned in the corner of the room next to a General who looks like he is running everything, is the NEW Swagger.

She says that photo shows Obama’s self-assurance and leadership style. He seeks out the opinions of his advisers. He believes in collaboration — all while he’s taking down the baddest terrorist on the planet.

He doesn’t need to wear a “Top Gun” flight jacket to project strength, she says.

Expect more snapshots such as the one from the Situation Room, says Ambar, the Lehigh University professor.

Really?  Well then the front of the General’s family refrigerator is going to get filled pretty fast.

As Obama moves into the third year of his term, photos will capture moments that show how far we’ve come.

“That’s part of what being the first African-American president is all about — we’re all being transformed together,” he says.

Ambar says he was so intrigued by the Situation Room photo that he cut it out to study it. He’s still parsing its meaning.

Well after Ambar is done with the picture, I have a great issue of Archie Comics he can analyze, that Jughead is such a cut-up.