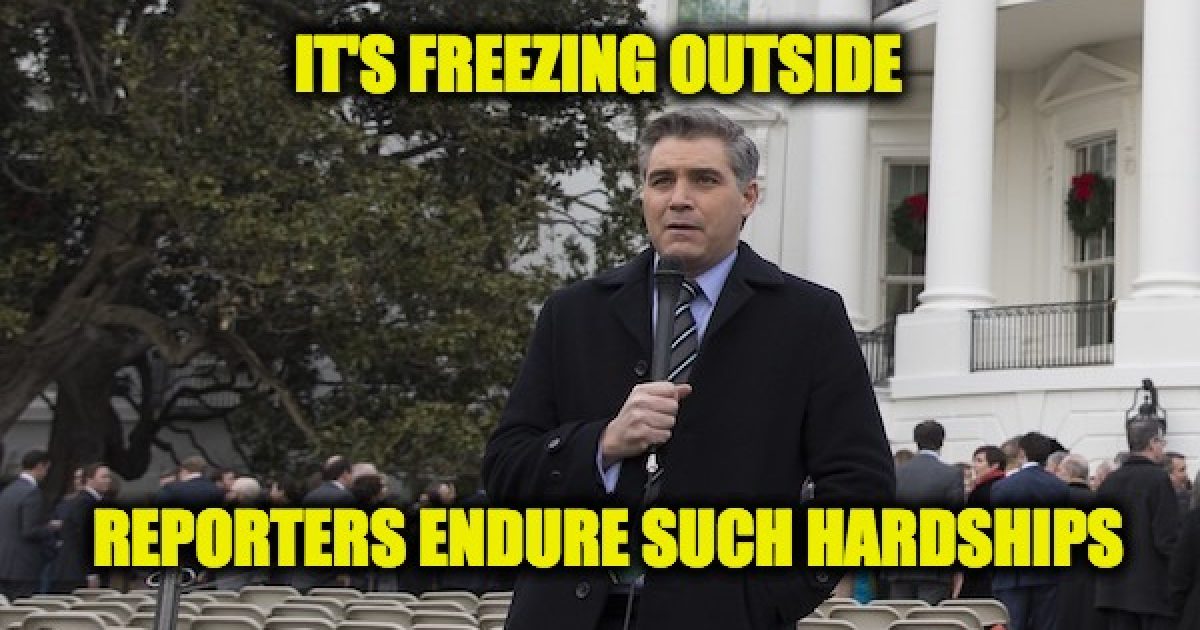 A CNN op-ed by Notre Dame Professor Joseph Holt that made such a strange comparison to the role of the press that it would be reasonable to question his sanity or sobriety, although there is no evidence that the peculiar comment was driven by anything but typical academic leftism.

In the op-ed Holt defended CNN’s Jim Acosta, who was heckled by Trump supporters at a recent rally. Acosta then had a temper tantrum when Press Secretary Sarah Huckabee Sanders wouldn’t rescind the president’s “enemy of the people,” comment. Baby Jim knows that Sanders’ job is to give the opinions of the POTUS, not hers, but he had a fit anyway.  Holt’s essay defended Acosta and also defended Kaitlin Collins whom the White House staff banned from a White House Event recently.

Somewhere, however, near the end of the piece, it sure seemed like the psychedelic drugs must have kicked in because Holt finished with:

“Far from being the enemy of the people, the press at its best is like a guardian angel that caringly and capably protects us from harm…We thank soldiers for their service because they devote themselves to protecting our freedoms, and we should. But we should also thank the media for the same reason — especially when the stakes have never been higher.”

No really! In the mind of this man teaching America’s youth,  Jim Acosta is the same as someone who is risking their life and limb to protect our families. See what I mean? Professor Holt was either stoned on the brown acid wavey gravy warned Woodstock about, or stoned on Leftism. At the most basic level soldiers have honor, Acosta has none. He is a narcissist who wants to make himself the star of every story.

As one might expect Professor Holt got creamed on Twitter (note some of these tweets use harsh language–but Holt did earn it).

With all due respect go fuck yourself ! Journalists compared to soldiers is a joke everyone saw these liberal media member sleep at the wheel the last 8 years under obam we know the deal u hack

Professor Holt, you are the one that lacks any class, comparing hyper-partisan elitists to the brave men and women who RISK THIER LIVES, is comical and lacks even the slightest bit of decorum and decency.

You can’t possibly be equating soldiers dying in the line of duty with members of the press being heartily called out by those that disagree with them. They will live to write or spout off another day. They won’t come home from work in a flag draped coffin.

Wow – obviously you never served. If the press would OBJECTIVELY report then they would stop being the enemy of the people, but when they fawn over one president and berate a different president in order to advance the political cause of the publisher/editor then we have issues.

See, Joe, the thing is I don’t see any flag-draped coffins carrying journalists. One pledges a solemn oath to defend the constitution with his/her life. The other not so much.

Maybe you might want to back off on the idea that the two are the same.

Are you serious with this garbage??? pic.twitter.com/waQSAhqwQC

While i accept the role of the press, your comparison is naive and insensitive. As a ND/navy vet whose ND son chose to serve, ask any similar family what it feels like to have someone serve in a combat zone….#naive

How do you write this and think, “Yes, this is good” and then submit it through edits where another person thinks, “Yes, let’s publish this.” https://t.co/yqhMudPkFG pic.twitter.com/hcX2jsdDMd

My US Marine child has taken bullets for this partisan media. The press needs to thank the military for the privilege to have their partisan soap box.

I’m a veteran who served many many years, who do you think you are!? Jim acosta is a disgrace as an American an reporter, how dare you compare him to a military member. He doesn’t know the meaning of sacrifice or honor! Just another example of the bubble you ppl live in.

Yeah because having an off the record dinner at The Palm is the same as flying half way around the world and getting shot at for little pay.

After reading your op-ed. I can only surmise that you are on crack. Put the pipe down honey, it is scrambling your brain.

There were many more, and some were much, much nastier.