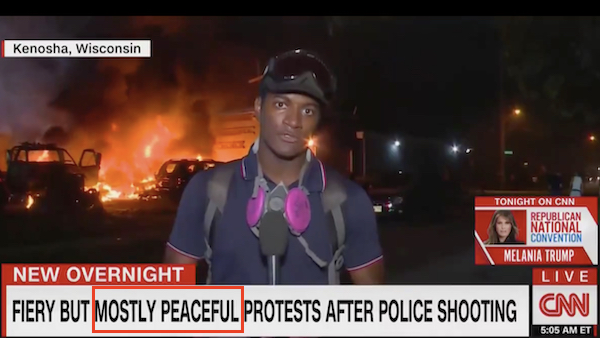 Were they vCNN lived up to its reputation as the “least-trusted” name in network news this week when it displayed a chyron touting what the network called, “Fiery but mostly peaceful protests” in Kenosha, Wisconsin. CNN Kenosha protests mostly peaceful

“It is literally impossible to tell the difference between @cnn and @TheBabylonBee,” Caleb Hull tweeted, referring to the popular satire site.

Twitchy noted the chyron “was from yesterday morning, which means it ‘mostly peaceful’ was *after* two protesters were shot and killed and one wounded…”

It is literally impossible to tell the difference between @cnn and @TheBabylonBee https://t.co/Ok2ZmqP61G

Newsbusters posted a partial transcript of the report:

OMAR JIMENEZ, CNN CORRESPONDENT: Christine and Laura, what you’re seeing is one of multiple locations that have been burning in Kenosha, Wisconsin, over the course of the night, a second night since Jacob Blake was seen shot in the back seven times by a police officer. And what you are seeing now, these images came in stark contrast to what we saw over the course of the daytime hours in Kenosha and into the early evening, which were largely peaceful demonstrations in the face of law enforcement.

It wasn’t until night fall that things begun to get a little bit more contentious. Things were thrown back and forth. Police started using some of those crowd dispersal tactics like tear gas, even playing really loud sounds to push them.

And then what you’re seeing, a common theme that ties all of this together is an expression of anger and frustration over what people feel really like has become an all too familiar story playing out in places from across the country not just here in Kenosha, Wisconsin — Christine, Laura.

“FIERY BUT MOSTLY PEACEFUL PROTESTS” is going to be in every GOP ad going forward.

reporting to you live from Pearl Harbor, where America suffered a mostly peaceful surprise attack by the Japanese empire

And they wonder why no one trusts them anymore.