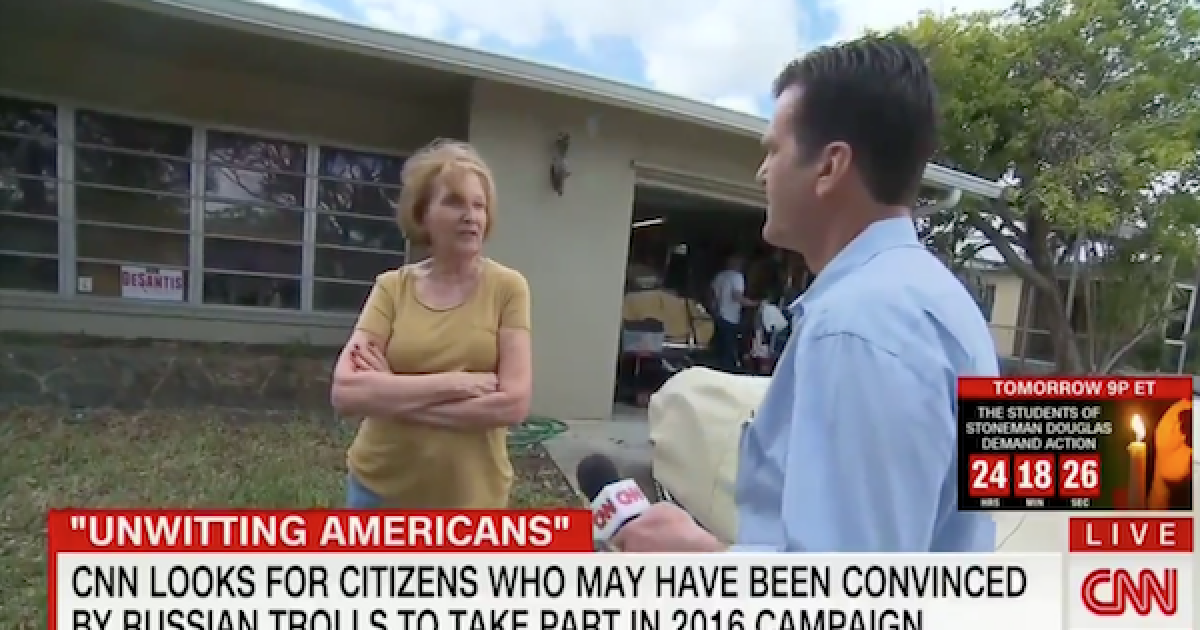 CNN really needs to make up its mind. Is it for Russian meddling in U.S. elections or against it?

As Rich Noyes of NewsBusters reported on Monday, the network, along with MSNBC, “gave enthusiastic coverage to the Russian-organized anti-Trump rally” on Nov. 12, 2016 “with live reports every hour. Correspondents celebrated the idea that it was “a love rally,” and repeated the marchers’ anti-Trump mantras, such as: ‘We reject the President-elect.’”

But on Tuesday, the cable outlet singled out Trump supporters it claims were unwillingly duped by Russians during the 2016 campaign. One of those was Florine Gruen Goldfarb, who runs the Team Trump Broward County Facebook page, which according to CNN Money,” posted numerous times about events that were promoted and encouraged by the Russians. Speaking to CNN on Sunday, she said she didn’t believe she was influenced by the Russians and said she thought that Friday’s indictment was a ploy to distract from the FBI’s mishandling of tip-offs it had received about the Parkland, Florida school shooter.”

Goldfarb’s comments echo a strain of thought on parts of the right that has extended up to the president himself. President Trump tweeted on Saturday night, ‘Very sad that the FBI missed all of the many signals sent out by the Florida school shooter. This is not acceptable. They are spending too much time trying to prove Russian collusion with the Trump campaign – there is no collusion. Get back to the basics and make us all proud!’

The video report, tweeted by media analyst and author Mark Dice, shows the CNN reporter berating Goldfarb, essentially accusing her of working with a foreign power:

CNN stalks and harasses Trump-supporting senior citizen in Florida for unwittingly sharing something on Facebook that was posted by the Russian troll farm.

This is a new low, even for the Clown News Network. What the heck are they doing! pic.twitter.com/kc1sKah4cp

The encounter didn’t sit too well with many:

What was his point? To prove that she is a Trump supporter? Success!

The reference is to the release of information on Friday by Deputy Attorney General Rod Rosenstein that showed Moore participated in a Russia-sponsored anti-Trump rally.