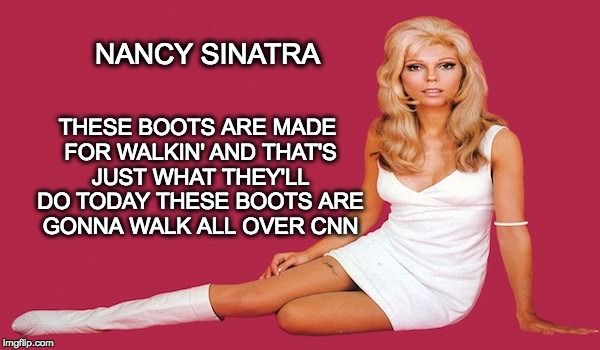 “These Boots Were Made for Walking” Sung by Nancy Sinatra Released:1966

While on the Internet she noticed that CNN had run a piece saying that she was unhappy that Donald Trump would be using one of her father’s classic ballads in his inauguration. (Trump used the old Frank Sinatra standard “My Way” in his inauguration celebration.)

Her reaction was in response to the title of this story at CNN, “Nancy Sinatra not happy Trump using father’s song at inauguration.” In the piece CNN wrote that;

Now that he’s about the assume the presidency, the younger Sinatra let the world know how she feels about one of her father’s famous songs being used in the inauguration festivities.

The only problem with CNN’s story was that Nancy Sinatra said it wasn’t true! (Which is a pretty big problem.) 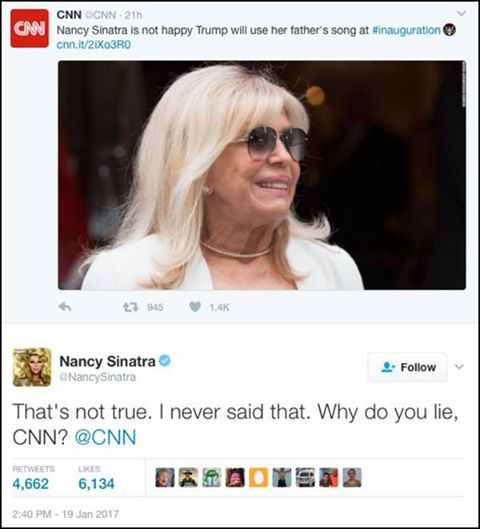 Upon seeing CNN’s story Sinatra tweeted out “That’s not true. I never said that. Why do you lie, CNN?”

CNN quickly amended their story, changing the title and noting that when Sinatra was asked about Trump using her father’s famous song in his celebration she responded, “Just remember the first line of the song.” Of course, the first line of “My Way” is “And now the end is near…” Which could explain why CNN thought she was unhappy with Trump’s song choice.

(Especially when coupled with the fact that Sinatra has not been a supporter of President Trump in the past.)

However, as a “news” organization CNN should have been more careful with their headline and they should have checked in with Sinatra themselves.

On Inauguration Day Sinatra made sure to Tweet her best hopes out to President Trump.