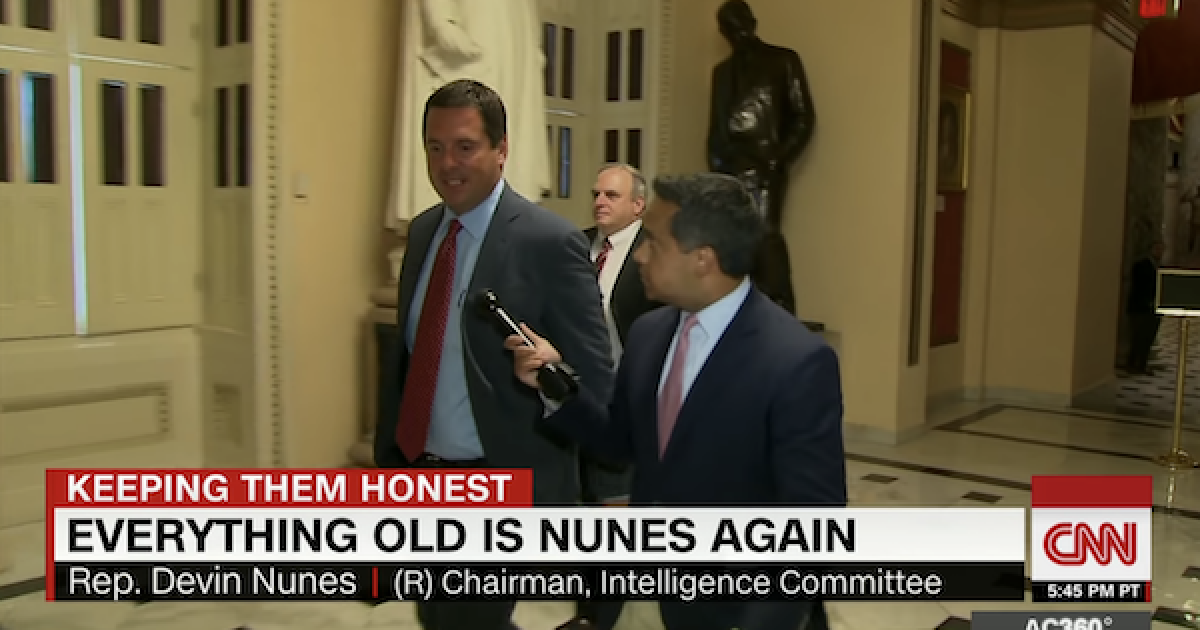 CNN just can’t cut a break these days. Last month, correspondent Jim Acosta shouted out questions during a break in Donald Trump’s summit in Singapore with Kim Jong-un. When other members of the press pool looked askance at him, he gruffly replied, “Hey, if they’re not going to let me in the f*cking meeting, then that’s what happens.” The comment was picked up by a hot mic.

On Monday, it was senior congressional correspondent Manu Raju’s turn to feel slighted. The occasion for the hurt feelings this time was a put-down by Rep. Devin Nunes (R-Calif.) whom Raju had attempted to interview.

The Washington Examiner has the details:

Rep. Devin Nunes, R-Calif., clashed with CNN as the cable news network pressed the House Intelligence Committee chairman to answer for a memo his panel released earlier this year on alleged surveillance abuse.

“He attacked CNN,” said senior congressional correspondent Manu Raju said Monday evening after tailing Nunes on Capitol Hill and failing to get the response he was seeking about whether he still stood by the memo..

“Do you really think I’m going to talk to the leading Democratic Party propaganda?” Nunes said to Raju, according to the clip provided by CNN.

Raju, the Examiner said, asked Nunes to comment on the Justice Department’s weekend release of more than 400 pages of highly redacted, top-secret documents related to the 2016 application for the Foreign Intelligence Surveillance Act (FISA) warrant taken out on one-time Trump campaign aide Carter Page, in addition to three renewal applications.

Following the release of the FISA applications, journalists and politicos have offered divergent takes about whether they adds credence or detracts from the HPSCI majority’s memo, released in February, which was based on the intelligence. That memo found that the dossier compiled by ex-British spy Christopher Steele formed an essential part of the initial and all three renewal FISA applications against Page and that the research’s Democratic financial supporters, the Democratic National Committee and Hillary Clinton’s campaign, were omitted from the FISA applications.

At the time, Nunes said the FISA court was misled and berated the media for the negative coverage of the memo.

Nunes later took CNN to task for refusing to air a statement provided by his office, which was just as scathing:

Also when asked my office gave them this quote…”CNN’s slavish adherence to the Democrats’ comical talking points is an amazing sight to behold.”…..Guess what? They refused to run the statement…This is another great example of “Fake and fraudulent news” https://t.co/ML7z0etx9T