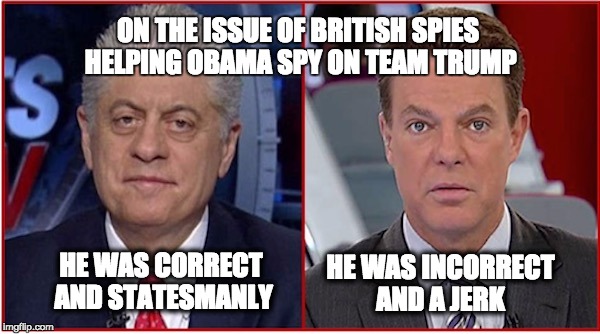 One month ago, Judge Napolitano said on Fox and Friends that three intelligence sources told him that former president Obama used British spies to get surveillance on Trump.

“What the heck is GCHQ? That’s the initials for the British spying agency. They have 24/7 access to the NSA database.”

Sources have told me that the British foreign surveillance service, the Government Communications Headquarters, known as GCHQ, most likely provided Obama with transcripts of Trump’s calls. The NSA has given GCHQ full 24/7 access to its computers, so GCHQ — a foreign intelligence agency that, like the NSA, operates outside our constitutional norms — has the digital versions of all electronic communications made in America in 2016, including Trump’s. So by bypassing all American intelligence services, Obama would have had access to what he wanted with no Obama administration fingerprints.

Thanks in part to an outburst by FNC’s Shepard Smith, who whined that it was fake news, the Judge was taken off the air for a few days. But when he came back, the judge said he stood by his story and so does his sources, but he did not attack the people who slammed his story.

Thursday night CNN confirmed much of the Judge’s story, while the report says the collection of data was incidental as opposed to a direct wiretap the rest of the CNN report follows along the Judge Nap narrative.

As the Judge said the information Including phone transcripts, flowed from overseas to the Obama administration. One of the intelligence agencies mentioned was GCHQ, the British intelligence agency identified by Judge Napolitano.

Unless CNN is lying there are a lot of people at Fox News who owe Judge Napolitano an on air apology, beginning with their afternoon MSNBC-imitator Shepard Smith. I would pay to see him choke out an “I am sorry.”
Facebook Twitter Flipboard