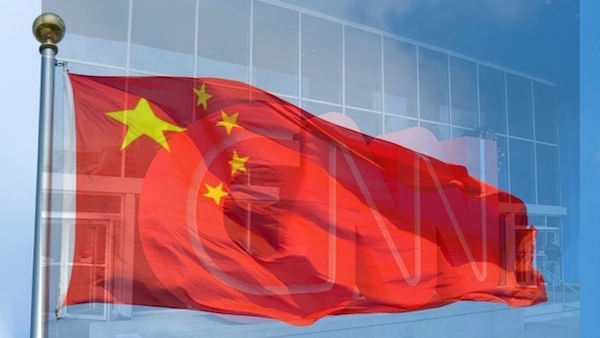 CNN “regurgitated” a news release from the People’s Liberation Army that came through the Global Times (a Chinese state-owned media). The release stated that it is evident that the Chinese military is doing a much better job of containing the virus that its counterparts in the US Navy. Straight up Chinese propaganda. CNN must be the China News Network.

When confronted by the Daily Caller, CNN defended it by saying they got the information from Global Times, the state-owned media, and they said as much in their story. A fact they said proved CNN’s “transparency.” But they didn’t refute the story in any way. THAT’s the issue.

“CNN published a report Monday from the Chinese People’s Liberation Army (PLA) about how the country’s Navy is reportedly doing a much better job containing the novel coronavirus than its American counterparts.

The report came from China’s English PLA website, CNN noted. The network wrote that their Navy “has done a much better job controlling coronavirus than the US Navy,” according to the PLA.

Portions of CNN’s write-up are extremely similar to the PLA’s military press release.”

"The single update from our international site’s 24-7 Live Story to which you’re referring explicitly states the sourcing as a PLA story and identifies the Global Times as 'a state-run tabloid.' That transparency is key as a global news source serving a global audience,"-CNN spox

On Monday, we reported on the Chinese aircraft carrier and its strike force that sailed through the Miyako Strait and was monitored by both Taiwan and Japan. They did so one day after the Chairman of the Joint Chiefs of Staff, Gen Mark Milley, warned our adversaries not to test the United States because of what they see with the COVID-19 infections.

We do not really know how the People’s Liberation Army – PLA – is affected by the virus. We don’t know whether any of their leadership in Beijing has tested positive.  Beijing, Shanghai,  the Chinese government is mum about any infections in those areas. So brag if they want, but it’s likely they are either lying again, or something far worse than a normal “pandemic” is at play here.

The Chinese government lies through its teeth about anything that affects their country. We know they lied about the virus in the beginning. We know they allowed people out of Wuhan at the beginning of the virus, knowing full well that they might have been infected. We know that Beijing tried to lay the blame for the virus on the United States. We have seen videos that allege they’ve been cremating people who were still alive, barricading people in their homes, or shooting them in the streets. We’ve seen riots as another province barred Hubei Province residents from entering.  We’ve read information from some scientists who say that virus may NOT have originated at the wet market, but likely in the lab in Wuhan. (See video here from the Epoch Times.) But CNN, ignoring all of that information, chose to parrot the words of the People’s Liberation Army without any refutation whatsoever.

Whose side are you on, CNN? It’s not ours, it’s the Chinese News Network.