Has CNN Become The Sh*thole Network? 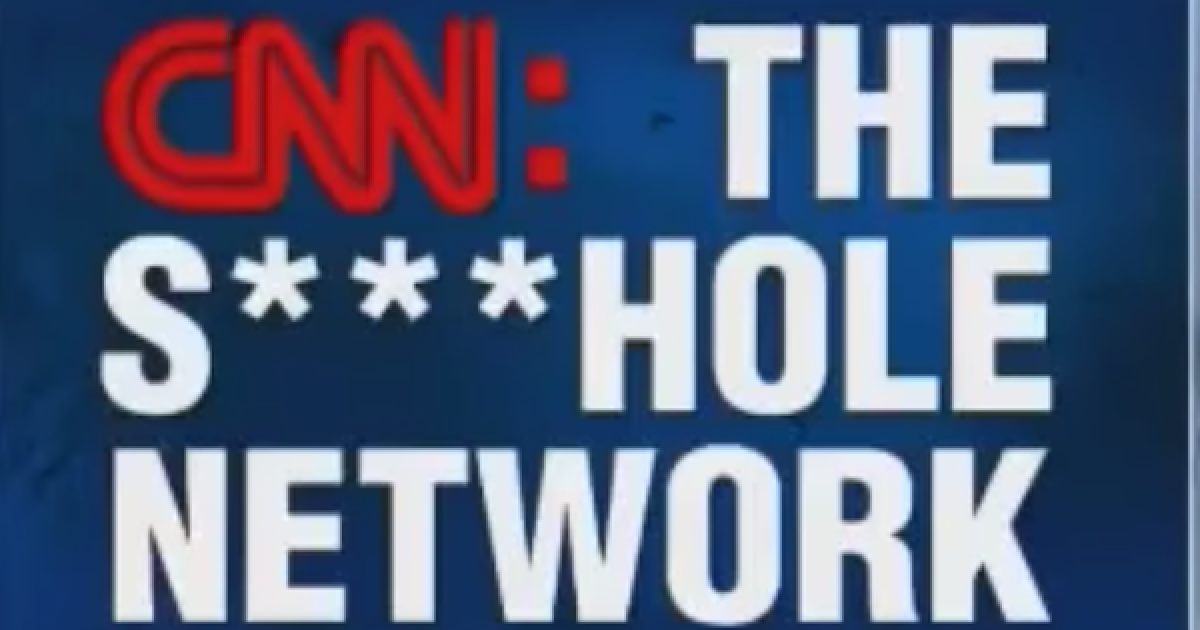 You may have noticed this past week after rumor leaked that President Trump had called some 3rd world nations, “shi*holes.” When asked, the President denied ever making the comment but he did admit that the conversation was aggressive. While the comment was controversial, what was even crazier was how the media, and particularly CNN, reacted to the commentary.

Dozens of normally civilized (if not left-leaning) journalists and hosts turned into mind-readers who just knew this was Trump’s way of admitting that he was a “racist.”

CNN not only called the President a racist on multiple occasions throughout the week, they also broke the record for saying the word “shi*hole” on one network over the space of just a couple of days.

All right. So, the sick, the twisted, the mentally unstable anti-Trump media again working itself into a new manufactured frenzy now we have been explaining how the biased press operates in this country for a while.

Here’s how it works: they rush from one fabricated meltdown to another and in the process, these brain-dead so-called journalists, they bounce around the same talking points in their little fake news bubble echo-chamber and it becomes a competition to see well who can say the most outlandish the most offensive the most completely false thing about President Trump. It’s like they’re hypnotized, lobotomized robots that kind of programmed every, wake up, hey, Trump. It’s really pathetic and it’s sad and it’s predictable and they are not serving you the American people.

Now, members of the media, sadly, their sheep, they’re closed-minded, they have actually convinced themselves, this is that psychotic part, through their own conspiracy theories, that president Trump is, oh, he’s suffering from dementia. He has early onset Alzheimer’s. He’s deranged.

Now, the newest fake news fixation is all about the president’s health. Think he’d be happy. And naturally, after the president’s doctor told them that he was in excellent — I repeat — excellent physical condition, and the shock them, could easily serve for two full terms, the media could not believe it. It goes against everything they have all been telling themselves hour after hour, day after day, week after week, month after month.

The press, they can’t stand the fact that the president scored a perfect 30 for 30 on a cognitive exam, and my guess is most of the people in the media world would probably fail that test if they took it themselves. I’d love to test them…

Now, we know that fake news CNN, I have a new name in a second. Then we know they hate the president, but really, they’re going to predict a guy that’s never examined the president, that he’s going to have a heart attack. Now, this type of behavior, it shouldn’t be surprising, especially coming from what we’re now calling.

You see it right there. CNN, the ssh-hole network or the shh-hole fake news network. It fits.

CNN somehow managed to say that word hundreds of times in one week alone. Here are just a few of the examples I promise I played them all I have too much news to cover tonight, but here’s some. We’ll put it on our Website tomorrow.

LEMON: What was your reaction when you heard the president called, you know, African nations (EXPLETIVE DELETED) holes?

FAREED ZAKARIA, CNN: It’s not care of what he meant by (EXPLETIVE DELETED) hole countries.

LEMON: Are you shocked or surprised by this?

PHILIP MUDD, CNN: Not surprised. In one way, I am proud. I am a proud (EXPLETIVE DELETED) hole.

UNIDENTIFIED MALE, CNN: No, we are not all created equal, at least not if you are born in, as the president put it, a (EXPLETIVE DELETED) hole country.

LEMON: Do you think these countries are (EXPLETIVE DELETED) holes?

LEMON: This is the president’s (EXPLETIVE DELETED) hole comments yesterday, a few more.

COOPER: Rich, do you have any example of (EXPLETIVE DELETED) hole country that the president referred to that is dominantly Caucasian?

MUDD: I am proud to be a (EXPLETIVE DELETED) holer.

LEMON: I never in a million years thought I would be saying (EXPLETIVE DELETED) hole on television.

Now, you would think that CNN after hearing this over and over and over again for the American people, when I’m about to play, maybe they would listen and say, wow, maybe we’re not doing something right here. Take a look.