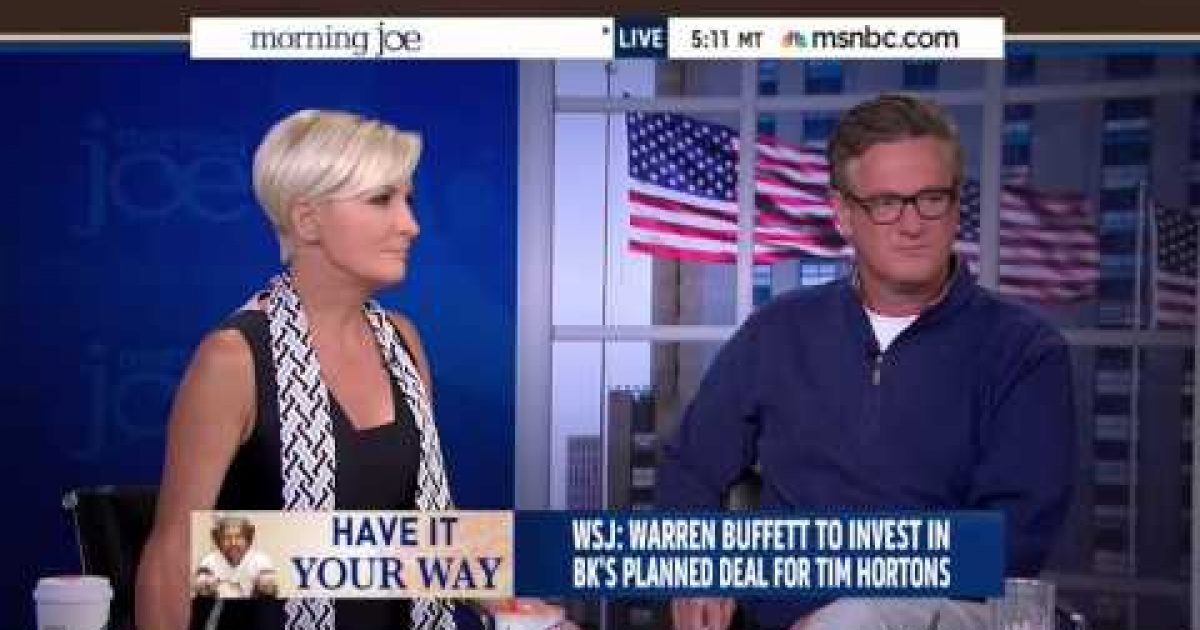 The Morning Joe crew has long championed Warren Buffett as a “good billionaire” for his “Buffett Rule” and his constant drumbeat that the wealthy should pay higher taxes. Because of their long-time support they displayed shock on Tuesday when they learned the “Oracle of Omaha” was helping to finance the Burger King purchase of the Tim Horton’s chain and the resulting move to Canada where corporate taxes are lower.

The panel expostulated in this way:

Brzezinski: Warren Buffet is no stranger to the debate over taxes and he is stepping into the center of the conversation once again in kind of a surprising way.

Brzezinski: “Wall Street Journal” says the billionaire investor is expected to provide 25% of the financing for Burger King to take over the Canadian chain Tim Horton’s. The deal is drawing scrutiny because it will allow Burger King to move its headquarters across the border and sidestep paying U.S. taxes. Buffett has long called for wealthier Americans to pay a higher share of taxes. News of the proposed restaurant merger sent shares of both companies soaring about 20% each. What do you think, Joe?

Scarborough: I think for a guy talking about how the wealthy need to pay their taxes, he has some ‘splaining to do.

Kay: I think if you’re going to talk about paying taxes to reach the level that you think the millionaires in the country should pay, you shouldn’t be seen doing something that skips your taxes by going overseas.

Barnicle: I think Burger King should remain in the United States. If they buy Tim Horton’s they should be paying their taxes here.

Scarborough: Duh! Yeah. And because what happens is —

Brzezinski: I feel like we are missing a part of the story.

Scarborough: What happens is that if Burger King doesn’t pay their taxes, that is passed on to the rest of us. We all pay those taxes.

Brzezinski: It doesn’t mesh with this message.

The panel is missing a few points, despite their claims Warren Buffett will be paying his taxes in the U.S. While the panel attacks Burger King for moving its corporate headquarters to Canada, all but 52 of its 13,808 restaurants worldwide are franchised. ​In other words, most of the BK business is in the hands of local small businessman who pay their taxes to the countries where they operate. The long-term potential is for an expanded docket of Tim Horton’s franchises in the United States (presently there are 50) which will be paying taxes in the United States. Additionally, nowhere in the discussion did they mention that at 35% the U.S. tax rate is amongst the highest in the world nor did the supposed conservative Scarborough suggest that bringing the tax rate down may convince Burger King and other companies to bring their companies back to America.

Finally, they ignore Warren Buffett’s history. While Scarborough, Brzezinski and their morning crew have been praising Buffett for his call for higher taxes, Buffett’s holding company Berkshire Hathaway was in a years-long dispute over its federal tax billsaccording to its own annual report. A notation in their 2011 annual report suggested that Berkshire Hathaway’s own auditors believed that $1 billion is more likely than not owed to the government.