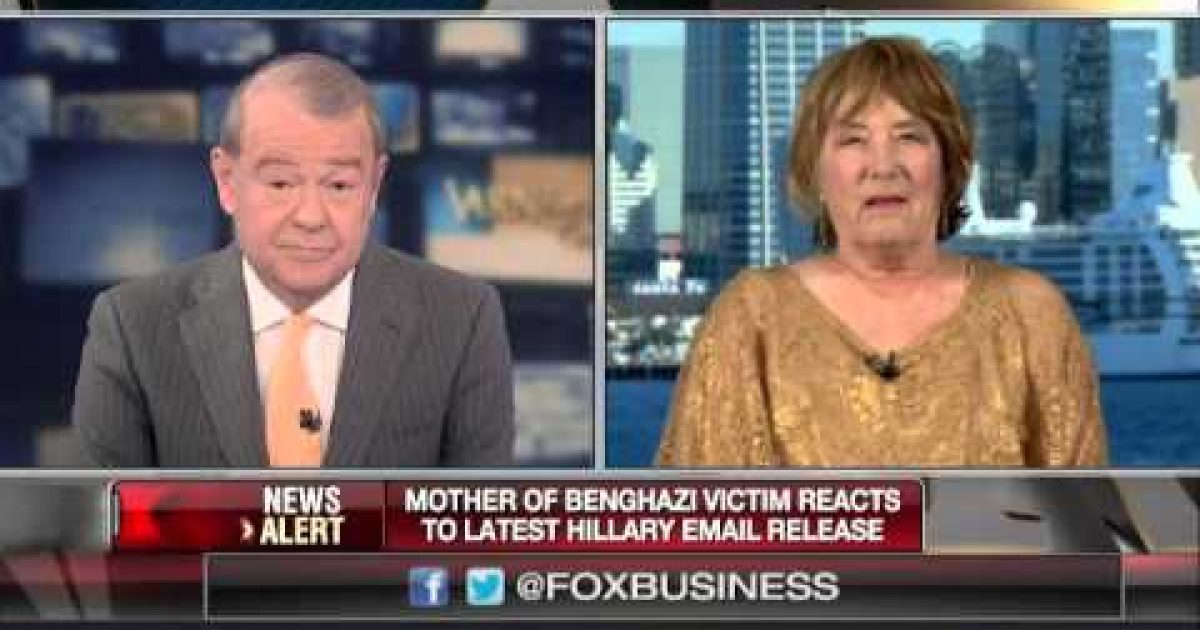 Hillary Clinton was confronted with her conflicting stories about the reasons for the attack on the U.S. Mission in Benghazi, Libya, and answered by throwing the victims’ families under the bus. She suggested they lied, because she never told them about the attack being caused by an offensive video. Perhaps they got caught up in “the fog of war.”

The questioning was part of an  interview with the editorial board of New Hampshire newspaper The Conway Daily Sun.

Sun Columnist Tom McLaughlin asked the video vs. planned terrorist attack question. He reminded Clinton that she “told an Egyptian diplomat the Benghazi attack was planned and not a protest but that she told family members of the deceased that the attack was the result of a demonstration. He said she then told George Stephanopoulos that she didn’t tell the families the attack was a demonstration about a film.”

“Somebody is lying,” said McLaughlin.”Who is it?

Clinton replied, “Not me, that’s all I can tell you.”

At the time, Clinton said, everyone was emotionally distraught. She said some families didn’t know their sons were working for the CIA or were in Benghazi. Clinton said the information she had about the attack was from the intelligence community.

“What happened is people were doing the best they could with information that was changing,” said Clinton. “The CIA wrote and approved the talking points that were used. It was also true that from Egypt to Tunisia to Pakistan, the video was the primary spark that was sending people into protesting against our facilities. All of this was happening simultaneously.”

Continuing to press, McLaughlin said three family members of victims said that Clinton told him that the attack was the result of the video and or that the filmmaker should be arrested.

Clinton replied that other family members believe differently and stressed she had sympathy for all involved. “I can’t recite for you everything that was in a conversation where people were sobbing, where people were distraught, the president and the vice president, we were all making the rounds talking to people, listening to people,” said Clinton. “I was in a very difficult position because we have not yet said two of the four dead were CIA … This was a part of the fog of war.”

The night of the attack Mrs. Clinton:

But in when she informed the America people she didn’t mention terror.

If anybody was a bit foggy about what she told the families it was Ms. Clinton.

And when she told George Stephanopoulos that she didn’t tell the families the attack was a demonstration about a film, Glen Doherty’s sister told Fox News, “She knows that she knew what happened that day and she wasn’t truthful. I know what she said to me.”

Michael Morell, the former deputy director and acting director of the CIA, wrote in his May 2015 book “The Great War of Our Time” that CIA intelligence “analysts never said the video was a factor in the Benghazi attacks.” (p. 205-206). And on page 219, Morell says, “the analysts thought Benghazi was terrorism from the beginning.” (p. 219)

This raises some interesting questions.  If the CIA and intelligence analysts never even mentioned the YouTube video, why did Ms. Clinton tell different people different things?   Or if Hillary Clinton never told them about the video, did the victim’s families have some clandestine meeting to invent the video story? And if this was the case, when did the families meet with, and convince President Obama and Susan Rice their video tale was the real one?

If Mike Morell told the truth that intelligence analysts and Secretary Clinton believed from the beginning Benghazi was a terrorist attack, what kept Ms. Clinton from saying so the day of, and the day after the attack? She didn’t publicly say anything about terrorism until September 21?

And if the information was changing as she claimed, how does that explain the fact that at the same time, Clinton was saying one thing in private and something entirely different in public?

There is no logical reason to believe that the families were lying, especially when one considers that the President and Susan Rice (the UN ambassador at the time) each claimed publicly the attack was caused by a video. And if she told the families it was the video, why did she tell the Egyptian Prime Minister and her Daughter it was a pre-planned terrorist attack?

Conway Sun Columnist Tom McLaughlin is correct, someone is lying, and based on the facts it wasn’t the victim’s families hindered by “the fog of war.“

Allow me to suggest that if any of her fellow Democrats removed their heads from the former First Lady’s pooper and research the available information such as the facts above they would have to agree that a liar like Ms. Clinton has forfeited any chance if moving back to the White House.

Are We Paying ‘Internet Influencers’ Now To Promote Getting ‘The Jab’?
April 15th, 2021 Clash Daily