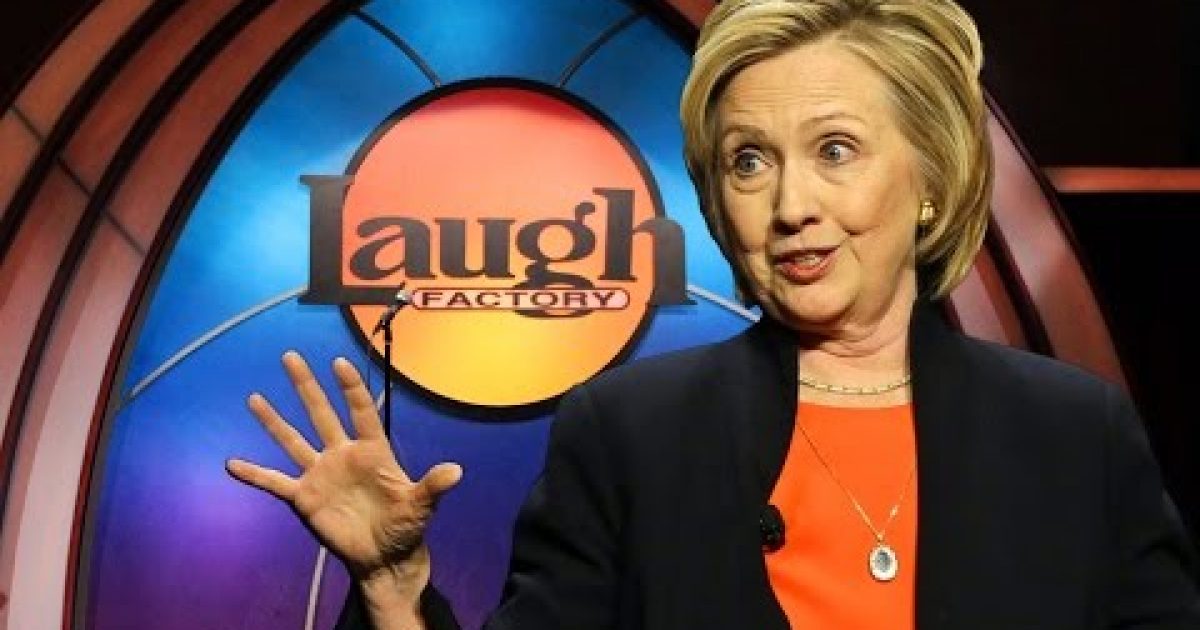 Hillary Clinton is out to prove she has no sense of humor- or any knowledge of the First Amendment to the U.S. Constitution.

Laugh Factory, a great Los Angeles comedy club posted a short <3 minute video consisting of  jokes about the presumptive Democratic Party nominee, told by five comics during their stand up performances at the club (video embedded below).

In what appears to be a first for a serious presidential contender, Hillary Clinton’s campaign is going crazy over the comic routines first posted on November 9th.

As reported by Judicial Watch, not only has the Clinton campaign tried to censor the video but they are trying to intimidate the comics by demanding the  Laugh Factory  turn over the personal contact information of the five comic performing in the video.

This is no laughing matter for club owner Jamie Masada, a comedy guru who opened Laugh Factory more than three decades ago and has been instrumental in launching the careers of many famous comics. “They threatened me,” Masada told Judicial Watch. “I have received complains before but never a call like this, threatening to put me out of business if I don’t cut the video.”

Practically all of the country’s most acclaimed comedians have performed at the Laugh Factory and undoubtedly they have offended politicians and other well-known personalities with their standup routines. Tim Allen, Jay Leno, Roseanne Bar, Drew Carey, George Carlin, Jim Carrey, Martin Lawrence, Jerry Seinfeld and George Lopez are among the big names that have headlined at the Laugh Factory. The First Amendment right to free speech is a crucial component of the operation, though Masada drew the line a few years ago banning performers—including African Americans—from using the “n-word” in their acts.

The routines that Clinton wants censored are pretty funny although some are pretty crass and include profanity (so don’t watch the video in front of young kids). But they are no worse than the regular funny fare at good comedy clubs. (The skits make fun of Clinton’s wardrobe, her age, sexual orientation, the Monica Lewinsky scandal and the former First Lady’s relationship with her famous husband).

as soon as the video got posted on the Laugh Factory website, he received a phone call from a “prominent” person inside Clinton’s campaign. “He said the video was disgusting and asked who put me up to this,” Masada said. The Clinton staffer, who Masada did not want to identify, also demanded to know the names and phone numbers of the comedians that appear in the video. Masada refused and hung up. He insists that the comedy stage is a sanctuary for freedom of speech no matter who is offended. “Just last night we had (Emmy-award winner) Dana Carvey doing Donald Trump and it was hilarious,” Masada said.

I sure hope these we don’t read about these comedians “committing suicide,” that sometimes happens around the Clintons.

Come on Hillary, get some decaf and enjoy the comedy in the video below (content warning):

Biden Should Be Charged With Treason Before He Even Takes An Oath For His Attack On The Second Amendment
January 16th, 2021 Sons of Liberty Media

The Church and the Tribulation
January 16th, 2021 TCP News