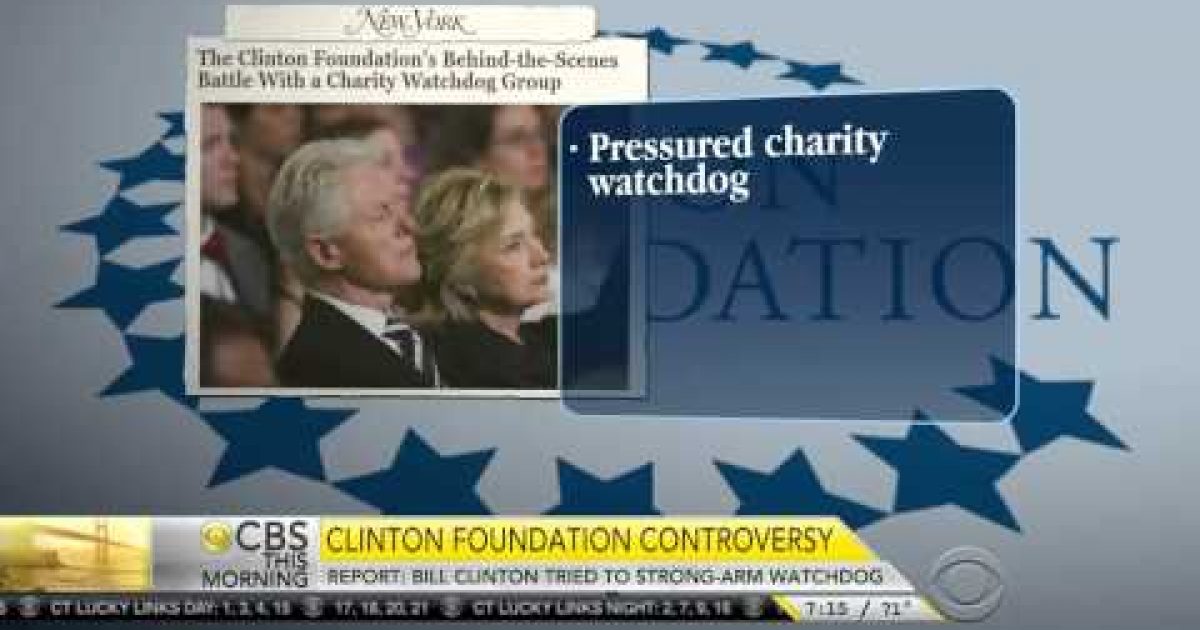 Facebook Twitter Flipboard
As part of the fallout surrounding the Peter Schweizer book Clinton Cash, we learned that the Clinton Foundation was on a “watch list” created by well respected charity watchdog, Charity Navigator.

The [Clinton] Foundation has demanded they extend the Clintons special treatment.
They also allege the Foundation attempted to strong-arm them by calling a
Navigator board member. “They felt they were of such importance that we
should deviate from our normal process. They were irritated by that,”
says [former Charity Foundation CEO] Berger.

Apparently the Foundation was warned they would be added to the “watch list” on March 11th based on pre-“Clinton Cash” reports of possible Foundation/State Dept. quid pro quo deals in late February.

Over the next few days, Foundation officials desperately attempted to contact Navigator executives to rebut their claims but, inexplicably, couldn’t get through to anyone on the phone. On the evening of Friday, March 13, Pally sent a detailed email rebuttal. “All of the other organizations on your watch list have had substantiated allegations of financial, fiscal or other impropriety,” she wrote, according to an email the Foundation provided to New York. “The stories you cite about the Clinton Foundation merely point to donations, or gossip around our operations, none of which constitute any wrongdoing.”

It didn’t work. During a tense phone conversation on the afternoon of March 17, Pally and Berger argued over the merits of the media’s claims about the Foundation. Pally said they were without substance; Berger insisted that since the newspapers published the articles, they were relevant. “Our whole thing is, if major media outlets say there’s something here that you should be aware of, we’re not going to be judge and jury on what the media says,” Berger later told me. “We felt there had been enough questions.” As a matter of practice, the Navigator doesn’t conduct its own investigations. On its website, they state: “Charity Navigator … takes no position on allegations made or issues raised by third parties, nor does Charity Navigator seek to confirm or verify the accuracy of allegations made or the merits of issues raised by third parties that may be referred to in the CN Watchlist.”

…Unfortunately for Hillary’s campaign, the Navigator’s policy is that charities that land on the list stay there for a minimum of six months. Sandra Miniutti, the Navigator’s spokesperson, told me that, in order to get off the list, the Clintons need to publicly address each of the controversies raised by the media with a convincing response.

Funny, the American public has been asking for the same exact thing.