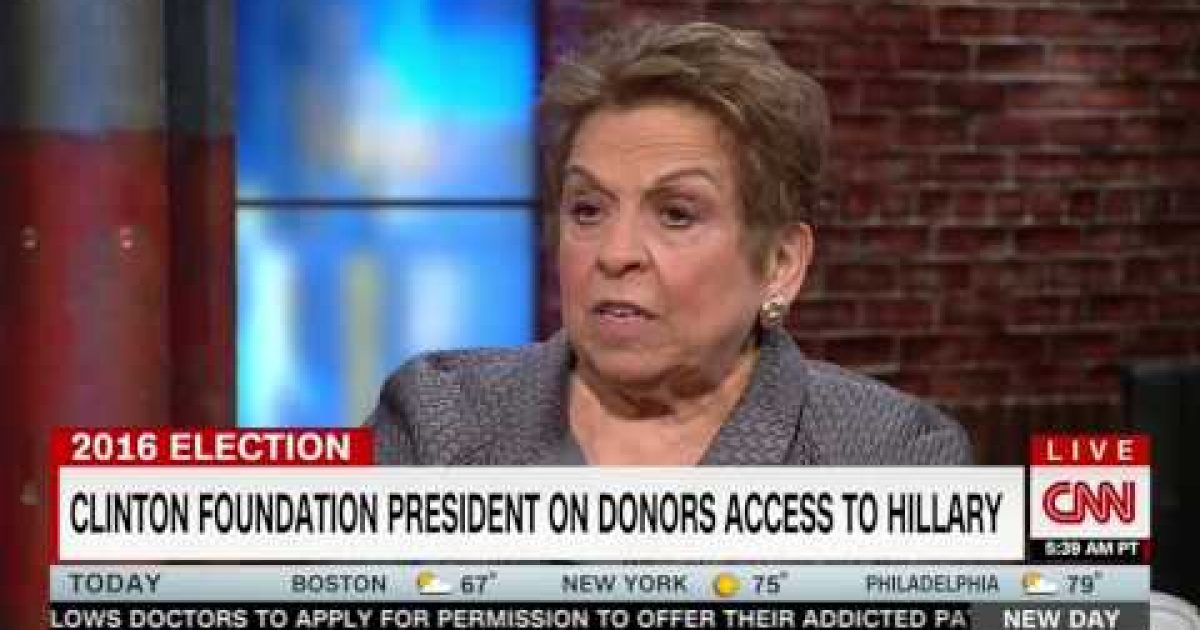 Clinton Foundation President Donna Shalala needs to make up her mind whether or not foundation donors were able to trade their donations for access to Hillary when she ran the state department.

On Thursday Shalala, who was also Bubba’s HHS secretary, sat down for an interview with CNN’s Alisyn Camerota and demonstrated why she remains an obedient member of Team Clinton.  When asked about foundation donors being able to leverage their donations to gain access to Ms. Clinton when she was running State Department, Shalala said, “That never happened. Never happened, I don’t care who asked for what. It never happened. It just did not happen.”

Camerota: “Let me show you an example of an e-mail that emerged that made people think that lines were crossed. Not policy perhaps, but certainly access. This is an e-mail from Doug Band, who of course is one of the top executives at the Clinton Foundation, to Huma Abedin who was at the State Department. Doug Band says we need Gilbert Chagoury, he of course the Lebanese-Nigerian business man who was looking for a land deal, to speak to the substance person regarding Lebanon. As you know he’s a key guy there, and to us, and is loved in Lebanon, very important. Huma Abedin at State Department says it’s Jeff Feltman, I’m sure he knows him. I’ll talk to Jeff. Doug Band says better if you call him, now preferable. This is very important.”

But on Wednesday Shalala was interviewed by Andrea Mitchell and she said something different. This time she said there was “no question” that donors to the non-profit are helped out by the powerful former first family through “courtesy appointments.” First of all, there’s no question there were phone calls made to get appointments for people” adding that she hasn’t seen evidence that there were policy decisions based on those meetings.

…) “People in public life are used to doing that kind of [thing], that is, making courtesy appointments for people. I certainly did it as Secretary with requests from Republicans in Congress. So I don’t find it unusual, we do have to be careful that it’s not linked to policy decisions as opposed to simply seeing prominent people that ask for appointments.”

But in she is talking about a different world because in Washington DC getting the meeting itself is the real prize. The inside-the-beltway culture is all aboud access.