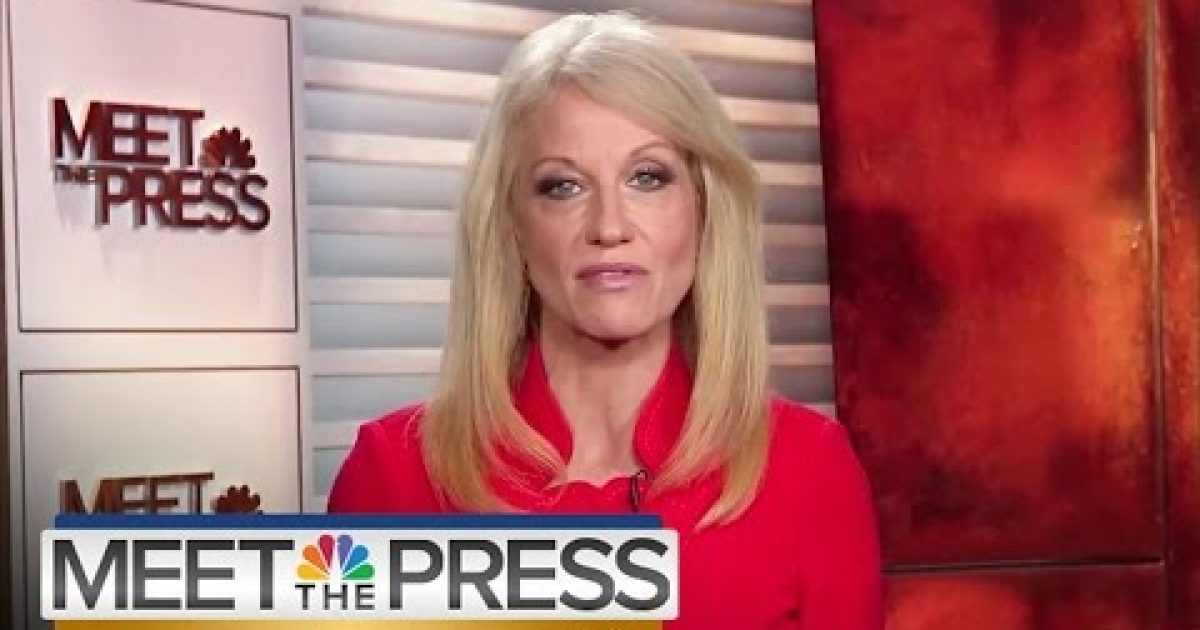 The first question he asked was to Benenson. “Are you being sore losers?” Benenson responded:

“No, I don’t think we’re being sore losers. I think we’ve acknowledged, and I acknowledged in that exchange with Kellyanne right from the start that they won, he’s President-elect. But I was also saying, taking issue with the notion that there was a mandate and that when you talk about connecting with people over America, Hillary Clinton had 2.5 million more Americans vote for her than Donald Trump.

“I’m aware of the currency of presidential elections, the electoral college. I’ve been on three winning presidential campaigns. But a mandate is when you win big in the popular vote, when you win big in the electoral college vote, like President Obama did two times. I don’t recall Kellyanne, she may say so today, that President Obama had a mandate or any Republican saying he had a mandate.”

Host Chuck Todd posed the same question to Kellyanne. “Kellyanne, are you being a sore winner? You’ve done this a few times, your own Twitter, I think, bio now just simply says, ‘We won.’ It’s like a drop the mic.” Here’s how she responded:

“Chuck, first of all, I showed great respect and grace to my colleagues from across the table for over two hours before this exchange happened. But the fact is that we are the ones who understood America. And the idea that we’re going to talk about the popular vote I think answers your question about sore losers. The idea that Donald Trump doesn’t have a mandate, after he got 100 more electoral votes than Mitt Romney did, he got 306 electoral votes, it wasn’t close, he won states that had not gone Republican in decades.

“And by the way, had this been a race for the popular vote, we would have won that too, because Mr. Trump would have campaigned in California, in New York, stayed in Florida, gone to Illinois, perhaps. These population-rich states. We did what we were supposed to do to become president, A) go and campaign in those states that were the so-called ‘swing states,’ ‘battleground states,’ B) actually have an economic message that appealed to workers across the country, actually talk about patriotism, defeating radical Islam and terrorism, repealing, replacing Obamacare.

“People open up their mailboxes and fire up their computers and see these premium increases. But, you know, the idea that he doesn’t have a mandate, when on President Obama’s watch they now lost the White House, 60 seats in the House, over a dozen Senate seats, over a dozen governorships, and over 1,000 state legislative seats, this Democratic party is having an identity crisis in a circular firing squad, and what I heard at Harvard is the same thing I hear all the time, ‘It’s Jim Comey’s fault, it’s Bernie Sanders’ fault.’”

Kellyanne then pointed out how the Clinton Campaign never bring up the actual person who’s mostly at fault, and that’s Hillary Clinton herself. Chuck Todd brought that up with Benenson. He mentioned to Benenson the most popular targets of the Democrats’ blame for Hillary’s loss: James Comey, 3rd Party candidates, sexism, young voters, the media, Obamacare premiums, Bernie Sanders, and Hillary’s health problem rumors. Absent the list was of course Hillary.

Todd asked if Hillary accepts any responsibility for the Clinton Campaign’s own defeat. Not surprisingly, he didn’t answer the question, and instead talked about what the Democratic Party has to do differently going forward to rebuild itself. His non-answer was an answer from Kellyanne’s perspective: “He did answer your question. They never accept it!”