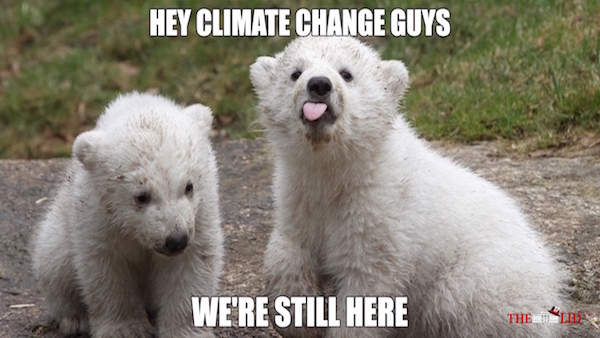 The liberal world has long held the belief that the man-made emissions of greenhouse gasses that are increasing the carbon dioxide in our atmosphere, is causing our entire planet to heat up.  The left’s need for this to be true has created entire industries of eco-friendly hogwash salesmen in the media who don’t serve the truth, but only truly serve the climate change excuse for the globalist agenda.

But in recent years, solar activity has been studied as a possible cause for the so-called “climate change”, and a prolonged period of less than average activity seems destined to reach earth in the next few decades.

In fact, Vencore Inc. has worked closely with a number of government agencies on weather-related projects, including NASA, NOAA, Naval Meteorological, and Oceanographic Command, Naval Postgraduate School, and the Intelligence Community. It is now suggesting that the extreme lack of sunspot activity may be an indication of a major cooling period for the Earth

Dr. David Evans Australian Scientist predicts a sharp global cooling in the near future, he wrote in June 2014:

The reason for the [coming] cooling is the dramatic fall in solar radiation that started around 2004.

There have been three big, steep falls in solar radiation in the last 400 years.The first was in the 1600s. It led to the depths of the Little Ice Age, and the Maunder Minimum. This was the coldest period during the last 400 years. There used to be fairs on the ice in the Thames River in London, because it would freeze over for weeks at a time.

The second fall is around the time of Napoleon and it preceded the second coldest period in the last 400 years, called the Dalton Minimum.

The third fall occurred recently, starting in about 2004. This recent fall is as big as the fall in Napoleon’s time, almost as large as the fall in the 1600s, and it seems to be steeper than either of those falls. But the temperature hasn’t fallen … yet. The cooling is most likely to begin in 2017.

Meteorologist Joe Bastardi points out that world temperatures are colder today than when Al Gore won the Nobel Prize in 2007, which raises the possibility that  Dr. Evans predictions are on pretty much on schedule.

Despite Dr. Evans predictions and similar ones made by other scientists, the left hasn’t stopped, or even slowed down performing alarmist feats of media, with the ultraliberal New York Times taking a moment to remind us that “climate change” is the real threat to the American way of life, not the battery of nuclear weapons currently pointed in the direction of our service men and women in Guam.

“The Communist regime in North Korea has threatened the small island of Guam with the launch of ballistic missiles, but some scientists say the U.S. territory is already feeling the effects of another ‘serious’ enemy.

“’Some Guam residents told reporters that they worried what might happen if North Korea’s leader, Kim Jong-un, were actually to follow through,’ the New York Timesreported on Friday.

“’Scientists in Guam, however, say they have at least one other major threat in mind: climate change.’

“’We know that it’s serious,’ Austin J. Shelton III, a marine biologist and the executive director of the Center for Island Sustainability at the University of Guam said in the Timesarticle. ‘Some of the impacts are here, and a lot more are coming.’”

The New York Times has become increasingly volatile in recent weeks as their grip on the liberal narrative has weakened.

With print media already fumbling toward extinction, and the Times and CNN being at the forefront of the nation’s “fake news” epidemic, it is only slightly surprising that the paper would transform into the desperate entity that we see before us now.