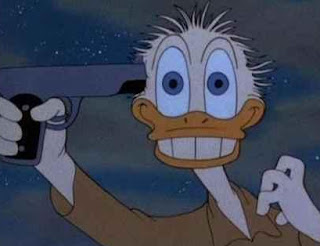 There have been many ridiculous claims from the global warming moonbats, but this one takes the cake. According to a report published by MSNBC (that should tell you a lot), all that extra CO2 in the air is causing birds to say to God, “You can’t fire me, I Quit” and then apparently fly into a cliff and die’

One scientist actually call them Gary Larson events because these arctic birds crashing into each other, slamming into cliffs from heavy winds, or bleeding to death after being attacked by mosquito swarms, reminds him of the ironically absurd scenes from the “Far Side” comics. The really absurd part is of the whole thing is that they are blaming all of this on global warming.

“We saw birds dying of what at best could be called Gary Larson events,” said Mark Mallory of the Canadian Wildlife Service in Iqaluit. “You see a bird for apparently no good reason fly into the cliff and die. You’ve got to be kidding.”

More than 20 Northern fulmars were caught in an avalanche slide and died hitting the sea ice. The fulmars, like other Arctic seabirds, tend to nest on cliffs made of sedimentary rock, which erodes more easily than other rock types. Early in the summer season, as the weather is just warming up and the ice and snow start to melt, there are small avalanches.

In another slapstick, albeit sad, event, a thick-billed murre was found dead after getting its foot stuck in a crack in the cliff face on Coats Island.

Man I hate when that happens.

In July 2005 at Lancaster Sound, hundreds of thick-billed murres (birds that resemble penguins but can fly) and black-legged kittiwakes died where they were nesting: “An entire cliff face fell away, and we estimate 800 birds were killed in this one event,” Mallory told LiveScience, adding that his colleague said it looked as if the rock had liquefied and the birds were just caught in the rubble.

The researchers suspect as the ice goes through freezing and melting, and the consequential expanding and contracting, it puts pressure on the rocks and causes these rock falls. Broken wings also took the lives of some savvy flyers.

“I was working at a fulmar colony and after a couple of days of fog we’d see fulmars on the sea ice, alive but with their wings broken,” Mallory said. “These birds are phenomenal flyers, but you take away their visibility to a meter or two and maybe that causes problems. In talking to my Inuit guides, they told me that they had seen this a lot, and thought that the birds flew into each other in low visibility.”

Birds were also found dead after being slammed into the ocean from so-called Katabatic winds.

“They flow down off of the glacier with the temperature differential and shoot across the land,” Mallory explained. Since the winds are intermittent and the birds, when on land, stay close to cliffs, they go about their usual leap into the ocean to snag food. No matter how much flapping the birds did, Mallory said, they just get driven into the water.

Possibly the most grisly deaths occurred when mosquitoes, which increase in numbers when temperatures warm, attacked the birds’ feet.

“It honestly looks like the murre has fur on its feet or is wearing fur slippers,” Mallory said.

When you read the first half of this report you get the feeling that this is a mass extinction of arctic birds equivalent to the death of dinosaurs 65 million years ago at the hands of a giant asteroid hitting what is now Mexico. The Scientists say that while the type of deaths  are unique, the percentage of dead birds represent a very small percent of the total bird population.

“Curiously a high proportion of the adult birds we see die tend to be dying [due] to factors related to climate and weather,” Mallory said. Some birds were killed by erosion of their cliff nests, crushed by melting ice, crushed by avalanches, or slammed into the ocean by really strong winds.

If temperatures warm and intense storms in the Arctic increase, along with other climate factors, “we might see mortality in these birds from these things increase from what they are now.” But Mallory adds that he and his team are not sounding an alarm bell that climate change is going to kill off all of the seabirds.

So Donald the arctic Duck is killing themselves because of climate change? We know now that the arctic Ice Caps are at “normal levels” As for these avalanches and strong winds the Scientists offer no proof that it is caused by global warming. Perhaps a better explanation is that the birds heard that Al Gore was going to come visit, and they killed themselves rather than listening to him talk about the global warming myth.  There is as much proof for my their as their is for Mallory’s supposition that the birds are dying because of climate change.

Anthony Watts has an excellent theory he believes the bird suicides may have something to do with the Alfred Hitchcock classic The Birds. Read his theory on his website Here