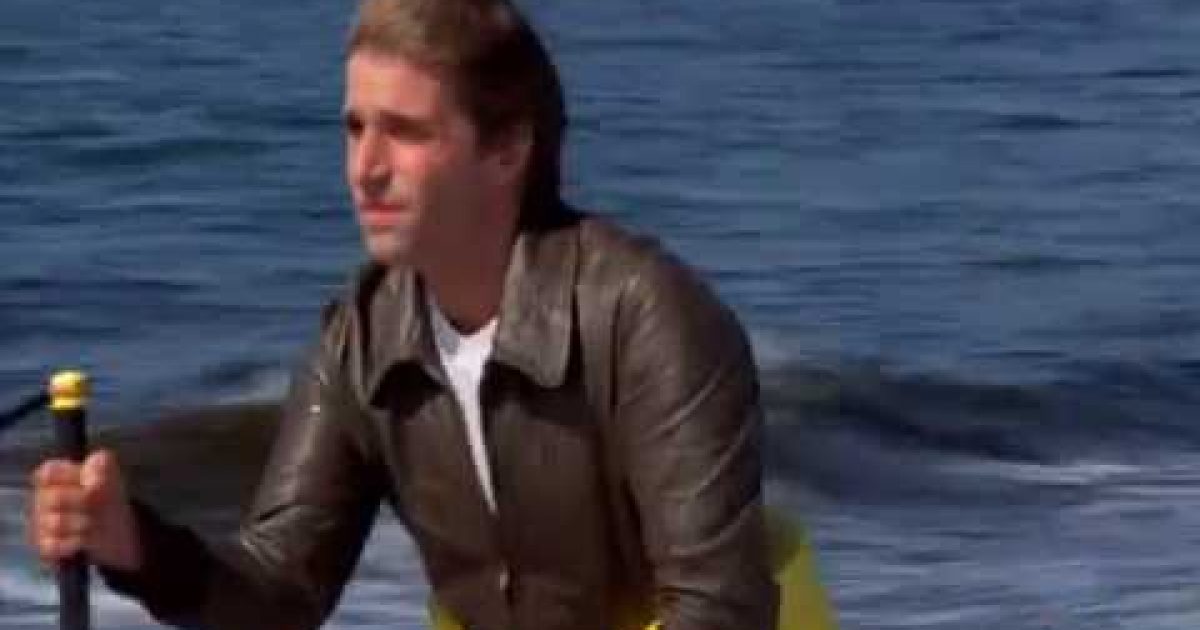 Jumping the shark is the point in in a TV Series where things get so far-fetched it is indicative of the series beginning it’s decline (it’s called that because of a scene in Happy Days where the Fonz actually jumps over a shark-see video below).

According to a report in the UK paper The Guardian, The New South Wales  (NSW) premier, Mike Baird, will launch the shark summit at Taronga zoo, featuring more than 70 experts from Australia and around the world.

The summit will highlight emerging technologies that can repel sharks, after a spate of attacks along the NSW coast. There have been a total of 13 shark attacks in NSW so far this year – up from three in 2014 – with one surfer, 41-year-old Tadashi Nakahara, killed near Ballina.

Because of the the rise in shark attacks many surfers have called for culling the heard of sharks near the NSW Shores. But the environmentalists and government policy makers don’t want to be mean to the sharks.  Their case was bolstered by a new study which says that killing sharks will make climate change worse.  No Really!

A paper published in Nature Climate Change warns the removal of top ocean predators such as sharks causes a “trophic cascade” throughout the food chain that results in the release of carbon into the atmosphere.

With about 90% of the world’s sharks and other large predator fish wiped out through overfishing and culling, potential prey such as sea turtles, stingrays and crabs have flourished.

As a result, turtles have been free to munch their way through larger amounts of seagrass and crabs have been able to disturb a greater amount of seabed sediment. Such consequences have “far reaching consequences on carbon cycling and, by implication, our ability to ameliorate climate change impacts” the paper warns.

The research, conducted by academics from Deakin University, University of Technology Sydney and Griffith University, said vegetated coastal habitats store 50% of the carbon buried in all ocean sediments, representing about 25bn tonnes.

There are no exact estimates of how much of this carbon is being released by animals free from shark harassment, but the paper points out if just 1% of this vegetation is lost, 460m tonnes of carbon dioxide would be released – the equivalent emissions of 97m cars

So it’s not just culling the sharks, its the Turtles eating too much. Of course none of that really matters

A peer-reviewed study this year [actually in 2010] found that the present day carbon dioxide level of 400 ppm was exceeded — without any human influence — 12,750 years ago when CO2 may have reached up to 425 ppm. ‘Scientists note that geologically speaking, the Earth is currently in a ‘CO2 famine’ and that the geologic record reveals that ice ages have occurred when CO2 was at 2000 ppm to as high as 8000 ppm. In addition, peer-reviewed studies have documented that there have been temperatures similar to the present day on Earth when carbon dioxide was up to twenty times higher than today’s levels.

So in the end with this little fish tale is the perfect example of the global warming theorists Jumping The Shark, just like the Fonz did in the fifth season premiere episode of “Happy Days.”

White House Admits to Shielding Biden from Reporters
May 7th, 2021 Flag And Cross

Presenting Irrefutable Proof That The Temple Mount Is Jewish
May 7th, 2021 The Lid

WATCH: Democrat Congressman Says ‘The Border Is Not Under Control’ And It’s A ‘Shell Game’ For Optics
May 7th, 2021 Clash Daily