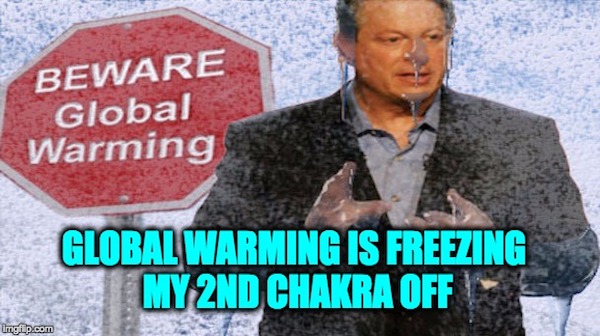 Perhaps it’s because most of the calamities predicted in the first movie didn’t happen, hurricanes didn’t increase in frequency and strength, polar ice caps didn’t melt, NY and other coastal cities aren’t underwater,   Mt. Kilimanjaro still is snow-capped, tornadoes aren’t increasing in frequency and strength, the arctic isn’t melting, the Antarctic ice extent is growing, oh and the polar bear population is doing very well thank you. So former VP Al Gore wants to try another movie. He didn’t however take my suggestion and call the movie, “More Crap That Wont Happen.” The inventor of the internet did come up with something new and creative, he blamed Brexit on Climate Change, so it gets added to the “Stupid things blamed on climate change” list.

His latest theory is that climate change caused the British Brexit vote:

“And, just a taste of this, to link it to some of the events that the UK and European Union are going through – think for a moment about what happened in Syria.

“Before the gates of hell opened in Syria, what happened was a climate-related extreme drought.

“From 2006 to 2010, 60 per cent of the farms in Syria were destroyed… and 80 per cent of the livestock were killed. The drought in the eastern Mediterranean is the worst ever on record – the records only go back 900 years, but it’s historic.

“And 1.5 million climate refugees were driven into the cities in Syria, where they collided with refugees from the Iraq War.

“Wikileaks revealed the internal conversations in the Syrian government where they were saying to one another ‘we can’t handle this, there’s going to be a social explosion’. There are other causes of the Syrian civil war, but this was the principal one.”

This, Gore went on to explain, led to an “incredible flow of refugees into Europe, which is creating political instability and which contributed in some ways to the desire of some in the UK to say ‘whoa, we’re not sure we want to be part of that anymore’”.

There’s only one problem with Gore’s claim…it’s bogus.

Let’s start with droughts. The science that states there has been no increase in droughts world-wide. In other words even if you believe the world is going to hell in a hand basket due to global warming, scientists say that climate change is not increasing the number of droughts in the world.

“It is misleading and just plain incorrect to claim that disasters associated with hurricanes, tornadoes, floods or droughts have increased on climate timescales either in the United States or globally,” Professor Roger Pielke Jr. said in his testimony before the Senate Environment and Public Works Committee.

In May of 2014 Professor Pielke  published a graph that shows the intensity of the planet’s droughts from 1982 to 2012. The graph shows that neither droughts nor their intensity have seen a growth trend during that 30-year period.

Satellite data proves that the earth hasn’t warmed in 18 years, which means when the Syrian civil war began the earth hadn’t warmed for 11 years. Therefore there was no global warming around for over a decade to cause the war.

In January 2014, a paper published by Francesca de Chatel, a Dutch specialist on water issues in the Arab world concluded  “[T]here is very little solid evidence” that climate change “will lead to more frequent and harsher droughts, [or] higher temperatures and lower and more unpredictable precipitation levels.”

As far as the Syrian civil war goes, it 2011 Arab Spring which included major uprisings in Syria, Libya, Yemen, Egypt and Bahrain, and smaller demonstrations in Algeria, Iraq, Jordan, Kuwait, Morocco and Oman. But the “drought” Obama spoke of was in Syria. The war is now being fought among several factions: the Syrian Government, a loose alliance of Syrian Arab rebel groups, the Syrian Democratic Forces, Salafi jihadist groups, including al-Nusra Front and of course ISIS which started in Iraq thanks to Obama’s negligence in pulling US troops out too early, and not Syria, but in Iraq.

So to summarize, Gore’s claim is wrong on three levels,

A. There is no evidence that Climate Change causes drought, nor is there any evidence that the number/scope of droughts are increasing.

B. At the time the Syrian civil war started in 2014 the Earth’s temperatures hadn’t warmed for 11 years

C. The Syrian civil war grew out of the Arab spring, not a drought.

In other words A+B+C=Obama is Full of Crap

On the bright side, Gore’s claim that Brexit was caused by climate change becomes #64 on