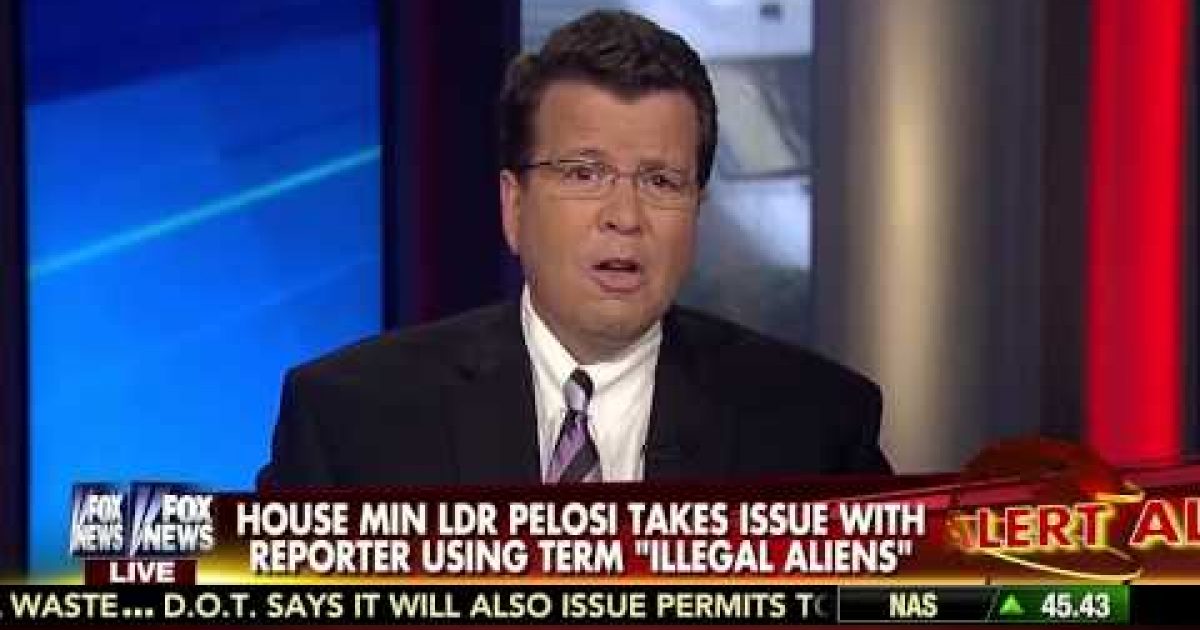 Neil Cavuto usually ends his daily Fox News program with a rant/commentary, but today he was bursting with anger and had to bloviate at the beginning of ‘Your With Neil Cavuto.”  Earlier today a reporter asked Nancy Pelosi a question using the term illegal alien, and Pelosi corrected her saying, “You mean undocumented person? That set Cavuto off:

Nancy, what part of illegal bothers you? Doesn’t undocumented mean illegal? If you don’t have documents, doesn’t that mean you don’t have them for a reason and might that reason be because, oh I don’t know…that you’re illegal?

If you with wave with a wand new ways to characterize millions who are illegally here, what do you call the others, documented Americans? Because all this time, silly me I just thought they were Americans.

Nancy, you might not the like the term illegal, but if you snuck into this country and did an end run around the laws of the country, you broke the laws of this country, that does not make you a bad person here, but it does make you person who should not be here. Because when you break our laws I hate to break it to you Nancy, you are a law breaker, you are not legally here you are illegally here. You are an illegal alien here.

This isn’t about saying things that, well just might offend you, Nancy. This is about something called our Constitution and honoring it, Nancy.

Now I know why it is so tough for you to call terrorism what it is. Think about it. You can’t even muster the words to call millions who shouldn’t even be here what they are they’re not undocumented. But I’m beginning to wonder whether some of you guys are just unhinged. Because this isn’t about millions of illegals not having papers, no offense Nancy, this is about you not having anything approaching a clue. Sorry I went on there, but, man, oh, man, what is going on?

Cavuto is right this use of undocumented immigrant talk is just stupid, especially if you continue with her logic:
You get what I am saying.  If the progressives really hate the term “Illegal Alien” then allow me to suggest a different term, “Criminally Trespassing Alien.”
Facebook Twitter Flipboard