Classic Battle of The Titans: Bill O’Reilly Vs. George Will 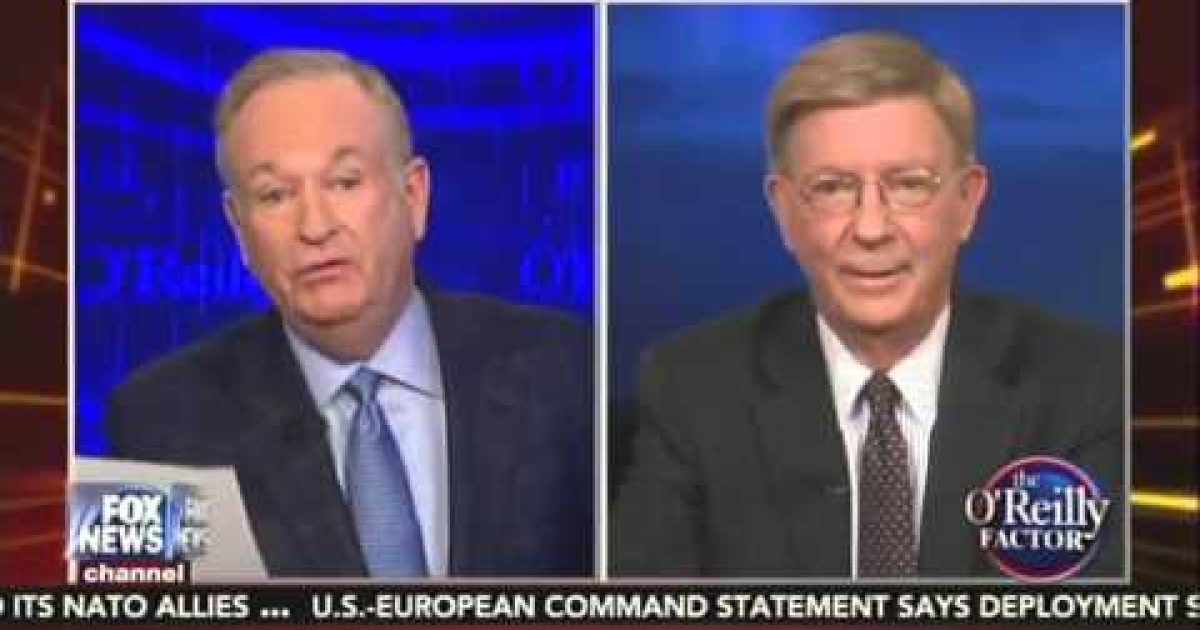 It is rare when two conservative titans call each other names on network TV, it is even rarer when they do it on the network they both work for. In an a no holds barred angry battle on Friday evening’s Bill O’Reilly show, the host clashed with George Will over the accuracy of O’Reilly’s book Killing Reagan.

O’ Reilly in his combative style called Will “a hack” a few times during the argument along with accusing him of being, “in with the cabal of the Reagan loyalists who don’t want the truth to be told,” and “actively misleading the American people.”

Will on the other hand shot down with classier put downs (as is his style) such as, “If you got it wrong, it would not be the first time you got it wrong,” “You’re something of an expert on actively misleading people,” and “Your book does the work of the American left with its extreme recklessness.”

In Will’s column Bill O’Reilly Slanders Ronald Reagan,” published earlier on Friday, he criticized  O’Reilly’s book for its contention that the assassination attempt against Reagan in March 1981 had weakened him over the course of his presidency.

Both agree that six years after the assassination attempt in a March 1, 1987 memo from James Cannon, to White House Chief of Staff Howard Baker raised concerns from White House aides about whether Reagan was all there. It even raised the possibility of invoking the 25th Amendment to remove him from office.

According to a Baker,

“I didn’t take Cannon’s memo lightly, but, from the first time I saw him (Reagan), he was fully in control and I never had any question about his mental competence.”

Both Will and O’ Reilly agree that Cannon repudiated his own memo.  But according to O’Reilly only because he faced pressure from other’s in the Reagan administration to do so.

Apparently neither O’ Reilly or his co-author actually read the memo, which is a central source of their Reagan theory.  Neither did they interview key members of the Reagan administration (note Howard Baker and James Cannon are both deceased).

Will: You, who began this interview by saying I had a moral obligation to call you before writing a column about your book, wrote a book without feeling any obligation to talk Ed Meese, George Shultz, Jim Baker any of the other people who could have refuted the thesis.

O’Reilly: And why did I not I talk to them?

Will: Because they would have refuted the flimsy thesis you have….

Honestly I cannot prove whether O’Reilly or Will is correct, and since O’Reilly is FNC’s huge cash cow, if forced to take a side the will invariably take O’Reilly’s side.

However, Will is correct in one important point, O’Reilly should have spoken to the likes of Meese, Schultz, and Baker to get their feedback on the record. And if he didn’t believe their account’s he should have laid out why he felt they weren’t being truthful.  The fact he didn’t interview the people in the Reagan administration casts doubt on the veracity of his tome.

Apparently the there were hard feelings because appearing on Special Report after the O’Reilly segment was taped,  Bret Baier asked the panelists for their winners and losers of the week–George Will named O’Reilly as his loser.

“The loser of the week is Bill O’Reilly of Fox News, whose book called Killing Reagan is being eviscerated by real historians and by almost everyone who worked and knew Ronald Reagan. Viewers might want to see his response to my criticism on a segment we taped for his show tonight that is so unhinged as to be highly amusing.”

Whoever you believe this battle of titans was classic train wreck entertainment and you will enjoy the video below: