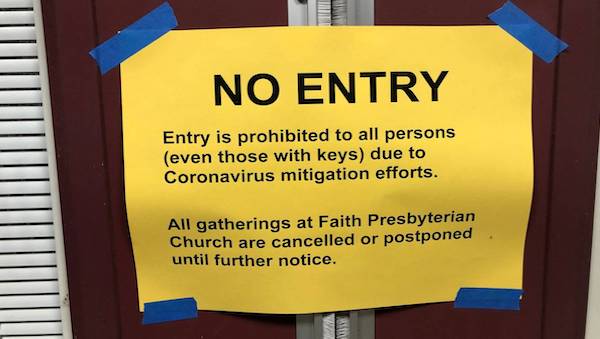 As the coronavirus pandemic continues to simmer just below the surface of the American cultural cauldron, there is another struggle emerging regarding just what establishments should and should not be operating during this national emergency. Church lockdowns

In some states, they’ve referred to the dichotomy as “essential” versus “nonessential,” with the difference between the two being decided all too often by bureaucrats.  In Michigan, this led to a series of protests after items such as children’s car seats and vegetable gardening supplies were deemed “nonessential.”

In California, several religious organizations have complained that Governor Gavin Newsom’s lockdown measures are inordinately affecting the houses of worship. The Department of Justice simply isn’t going to stand for continuing the Church lockdowns while other public places are allowed to open.

Assistant Attorney General Eric Dreiband pointed out that Newsom’s plan allows a variety of businesses to reopen in “Stage 2,” but does not allow churches and other houses of worship to reopen until “Stage 3,” for no apparent reason.

Citing Attorney General William Barr’s April memorandum warning state and local governments to respect First Amendment rights of religious freedom — “[T]he Constitution is not suspended in times of crisis,” Barr wrote — Dreiband argued that while California could determine the pace of its reopening, it could not infringe on religion…

Dreiband told Breitbart News Sunday recently that the DOJ had achieved results by writing to local governments to inform them that they were infringing on religious liberty, and they had backed down from draconian restrictions.

The Los Angeles Times notes that while several California churches have already challenged the state’s stay-at-home orders, none has yet been successful. Dreiband acknowledged these decisions, but argued in his letter that the decisions do not address discrimination in the reopening plan.

May 31st is a key date for a conflict between Churches and the State. California Church United, a network of 3,000 California churches, representing 2.5 million members, announced it plans to open May 31st, instead of waiting until the state implements phase 3, which includes allowing modified reopening of houses of worship.

Newsom is a leftist. Leftists generally believe that people should follow the government before their god.

One can only imagine that this is a scenario that will play out in California but several different states in the coming weeks.