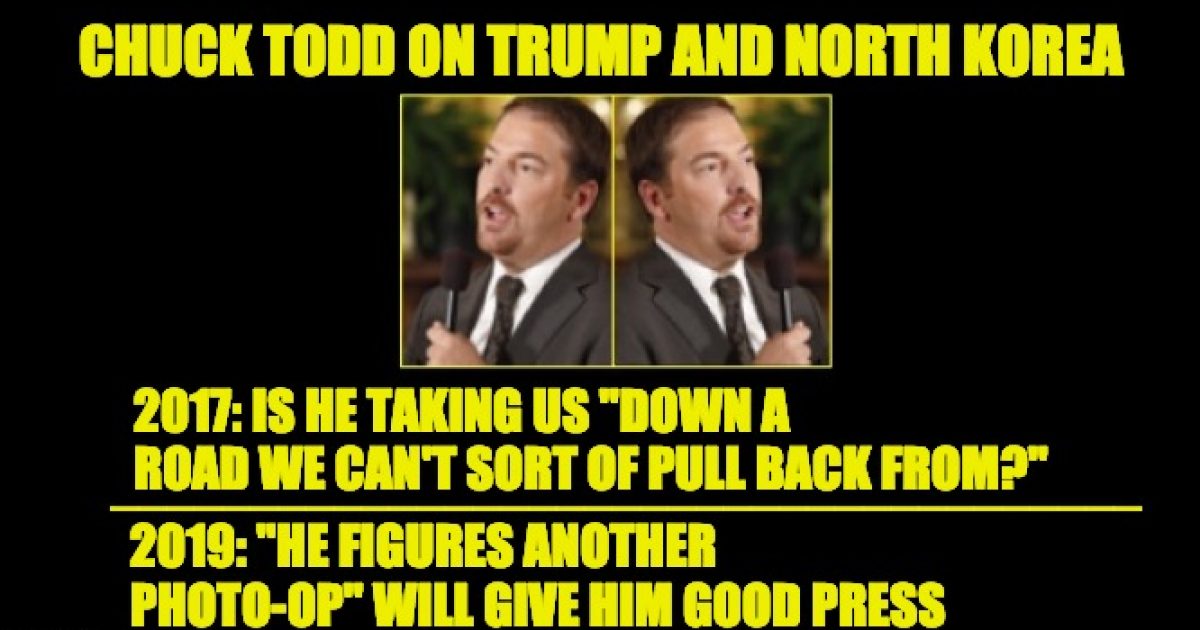 Chuck Todd needs to make his mind up! On a Meet the Press episode in Sept. 2017, Chuck Todd talked about his concern that the insults President Trump’s was tossing at North Korea’s Kim Jung Un were leading the country down the path of war. But only seventeen months later as President Trump is on his way to a  second meeting with Kim Jung Un, Todd is saying that Trump is just having the Kim meeting for good press (as if that were possible).

During the 9/24/17 Meet The Press, Host Chuck Todd declared:

There’s been a lot of back and forth between the president and the leadership in North Korea. The rhetoric has been, shall we say, not high, it’s been a little low. You have the president tweeting: “Kim Jong Un of North Korea, who is obviously a madman who doesn’t mind starving or killing his people, will be tested like never before!” “Just heard Foreign Minister of North Korea speak at U.N., If he echoes thoughts of Little Rocket Man, they won’t be around much longer.” But then, you had the leader of North Korea calling the president also some pejorative in his language. Are you concerned that we’re going down a road we can’t sort of pull back from?

Todd wasn’t alone, there were others who were worried that the President’s rhetoric was leading the US toward war.  But the truth was he was driving this country down the path to talks, on our terms.

In June 2018 the President met with Kim Jung Un in Singapore. That meeting led North Korea to back down a bit. They stopped testing nuclear weapons and ceased launching rockets over Japan and other allies.

President Trump is about to meet with Kim Jung Un a second time. This week he will be going to Vietnam to sit down with the North Korean despot and try to make additional progress to denuclearizing the Korean Peninsula. One would think Chuck Todd would be happy that the President pulled back from the road he was worried about in September 2017, but instead he attacked.

Well, look he has shifted the goalpost of trying to play down what’s going to come out of it. I think the President is just looking for good press. I mean, let’s just be frank. He felt like he got a good press after the last one and he figures another photo-op might do that, but it does look like there really is not a lot. I mean, I think he wants to be able to say something: “I ended the Korean war.” Right? That’s technically not happened. Maybe he walks away from that.

I will be honest, Willie, it is telling to me that the national security adviser, John Bolton, is not even going. He says he’s staying back to monitor events in Venezuela. Not an insignificant thing going on there. Don’t get me wrong. The Vice President going there to Columbia tomorrow, very important for them to be monitoring that situation. But if something big was going to happen with North Korea, I promise you that John Bolton will be there.

If Todd were honest (a rare moment I know), he would have told his audience that Secretary of State Mike Pompeo has been the administration’s lead on North Korea talks, Pompeo is going.  National Security adviser has taken the lead on Venezuela, so of course, he is staying behind to deal with the Venezuela crisis. Also, keep in mind that the fat despot with the lousy hairdo has not been a fan of Ambassador Bolton.

Last June after the President’s Singapore meeting with Kim Jung Un, The Atlantic, no fans of the Trump Administration wrote;

A senior White House official who spoke on condition of anonymity downplayed Bolton’s lower profile recently, pointing out that the initiative was being led by Pompeo and that no one wanted a misunderstanding with the North Koreans. “This has been [Pompeo’s] initiative and clearly he’s the face of it and he’s the one who’s been interacting with the North Koreans,” said the official. “John has history with them.”

“He’s been very clear, his views—everybody knows what his views are—it doesn’t matter,” the official said. Bolton “sees himself as very much a personal adviser to the president and not somebody who’s running a mini State Department.”

So is President Trump going to Vietnam just for good press?  Donald Trump is not an idiot, after two years in office he knows that he could cure cancer and make peace and the media would still hate him.  The President is going to Vietnam for a North Korean summit to negotiate Kim Jung Un further away from nuclear arms.

Chuck Todd’s Trump derangement syndrome has clouded his journalistic judgment (if he ever had any). The video of Todd’s comments regarding the latest summit is below: