Chuck Todd Blasted Hannity, But Never Mentioned All Of His Conflicts 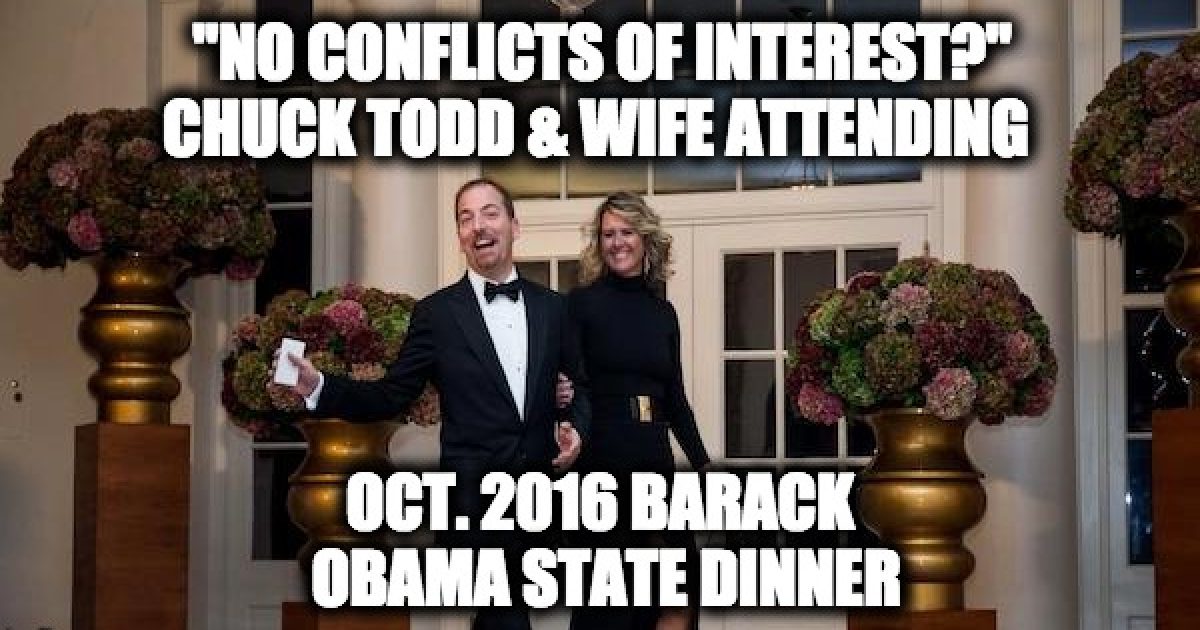 Going to find out what kind of org Fox is today. No serious news org would allow someone this conflicted to cover this story https://t.co/8KX1JLlzpx

But Chuck Todd has interviewed too many politicians without mentioning his own and IMHO, more serious conflicts.

Radio hosts Sid Rosenberg and Bernie McGuirk started their chat with Todd by admitting their friendship with Hannity, which resulted in the “Meet the Press” moderator claiming his beef was with Fox News for not forcing Hannity to explain his relationship with Cohen whenever the subject comes up.

“Just in the same way that any time that I’ve interviewed somebody that my wife has professionally worked for, I let people know,” Todd said.

McGuirk fired back, “Some say you haven’t done that all the time.”

There’s more. Per NewsBusters in October 2016:

In 2012, Kristian Denny Todd contributed $2,500 to Sen. Tim Kaine. Todd never felt any need to disclose this during his three recent Kaine interviews on NBC (August 7, September 18, and October 23).

Maverick Mail & Strategies, the firm Mrs. Todd founded in 2007 with fellow James Webb aides Steve Jarding and Jessica Vanden Berg, did heavy lifting for openly socialist Bernie Sanders for President this year. Open Secrets shows a bill for $1.992 million made in ten payments to Maverick from January to April. Todd has never disclosed this business relationship in 11 Sanders interviews this year. (If the work began in 2015 before the payments, Todd failed to disclose any tie in six Sanders interviews in the second half of 2015). We didn’t even count any Todd interviews with Sanders on MSNBC.

Todd contends that NBC knows about his wife’s work and that he is not involved with it so there’s no need to tell the viewers, perhaps he’s never heard the term “household income.”

In the example below, Todd can’t blame his wife because his name was on the invitation.

Then there’s the Wikileaks revelation, a 7/11/15  email to Hillary’s campaign chairman Jon Podesta inviting him to a party at Todd’s house for Clinton campaign staffer Jennifer Palmieri and her husband. If that’s not a conflict of interest what is?

So what’s the story, Chuck? Are conflicts only okay when they come from the peacock network?  Before you attack Hannity and Fox, perhaps you should first clean your own house?  And to paraphrase Todd’s own words, “We already found out what kind of org NBC News is. They can’t be a serious news org, because they allow someone this conflicted to cover politics.”

Parts of this post were originally seen at Liberty Unyielding