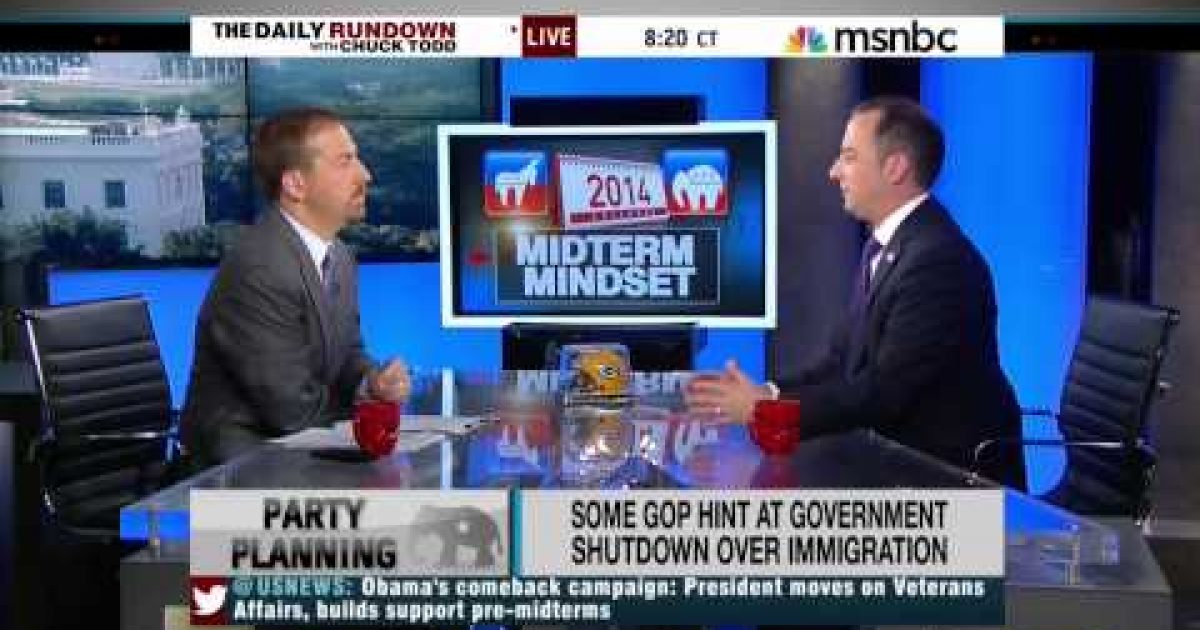 Sometimes its not the topic of question an interviewer asks that makes it biased, sometimes it’s the way the question is asked.

Interviewing  RNC Chairman Reince Priebus on Thursday Chuck Todd inquired whether the Republican Party had “too many crazy white guys who have crazy theories about my reproductive system and not listening” to appeal to women, “and Hispanics same thing.”

The RNC chairman was invited on to the program to discuss a “Politico” report describing two Republican-affiliated polls describing the party’s worsening problems with women. Priebus came armed with a “bribe,” giving the MSNBC host a mini Green Bay Packers helmet, but the gift didn’t move Todd off of his usual liberal bias as he chose to reinforce the liberal meme about Republicans.

Priebus: You know, I’m not sure. There’s one poll, and we’ve done a number of polls too. One of the things we see consistently is that tone matters. But I think the point of that poll wasn’t reported obviously by Politico. The point of the poll actually was that if you looked at it, women were rejecting the Democratic Party by 40%, they were rejecting the Republican Party by 50%. I don’t think either party can do a victory lap here. But the point of the poll was, I believe, was that to the members of the House and the Senate, is that if you present your plans and you present the solutions to problems that relate to the economy, which is the number one issue and you push back on what the Democrats are selling out there in the field, you can actually win women over. I mean, that was the entire point of the poll. In spite of all this chatter, we’re going to have a great year.

Todd: It’s interesting when you talk about that, because I’ve heard the same argument about Hispanic voters.

Priebus: But I think it’s true. You have to fight for the votes.

Todd: There’s no doubt. But the problem you seem to have is when it comes to women voters, do the — do the arguments about contraception end up blind — basically putting the party on mute with those same women voters who may like your economic proposals but say, you know what, there’s just too many crazy white guys who have crazy theories about my reproductive system and not listening — and Hispanics same thing. Hispanics who maybe on some social issues would be with you, but the immigration talk says, you know what, I can’t trust because they have a whole bunch of crazy guys that talk crazy on immigration.

Rep. Tlaib on Israel Not Vaccinating Palestinians: ‘Important to Know Israel Is a Racist State’
January 20th, 2021 The Mental Recession