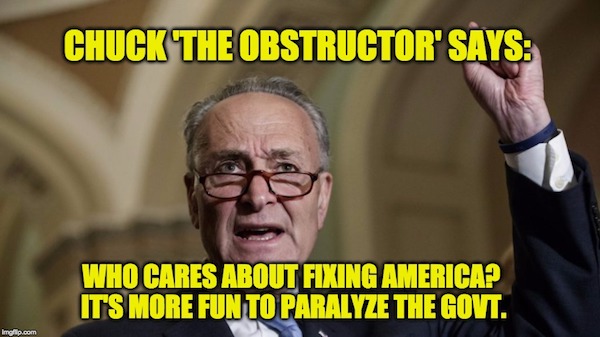 After making sure that President Trump spent the first two months of his presidency without a full cabinet Senate Minority Leader Chuck ‘The Obstructor’ Schumer (D-N.Y.) is looking for new ways to delay Judge Neil Gorsuch’s inevitable senate approval on his way to become the next associate Justice of the Supreme Court. At least the senator’s latest is creative. He is urging Republicans to delay a vote on Gorsuch because of the ongoing investigation into potential ties between Trump officials and Russia.

The Hill quotes Schumer as saying:

“It is unseemly to be moving forward so fast on confirming a Supreme Court justice with a lifetime appointment while this big gray cloud of an FBI investigation hangs over the presidency,”

He was using the same grey cloud analogy as House Intelligence Committee Chairman Devin Nunes (R-CA) used the day before.
During his first full day of questioning on Tuesday Judge Gorsuch performed more than admirable, he hit a grand slam home run, as evidenced by the comments coming from the liberal cable news networks:

Of course Chuck “The Obstructor” doesn’t see it that way.  He sees it as  “the height of irony” that Republicans blocked then-President Obama from filling the Supreme Court seat  but are “now rushing” to confirm Gorsuch.

Chuck ‘The Obstructor’ Schumer forgets that blocking Obama’s attempt to fill the Supreme Court seat was a Democratic Party Idea.

It was the former SCHMOTUS, Joe Biden who as a senator in 1992 said:

I am sure, Mr. President, after having uttered these words some will criticize such a decision and say it was nothing more than an attempt to save the seat on the Court in the hopes that a Democrat will be permitted to fill it, but that would not be our intention, Mr. President, if that were the course to choose in the Senate to not consider holding hearings until after the election. Instead, it would be our pragmatic conclusion that once the political season is under way, and it is, action on a Supreme Court nomination must be put off until after the election campaign is over. That is what is fair to the nominee and is central to the process. Otherwise, it seems to me, Mr. President, we will be in deep trouble as an institution.

Chuck ‘The Obstructor’ Schumer took it a bit further, in July 2007 promised to try to filibuster any candidate that Bush #43 nominated:

“We should not confirm any Bush nominee to the Supreme Court except in extraordinary circumstances,” Schumer said. “They must prove by actions not words that they are in the mainstream rather than we have to prove that they are not.”

But with Chuck isn’t just the supreme court, filling his role as ‘The Obstructor’ Schumer tried to block ALL of Bush #43’s federal court picks, as the New York Times noted:

One way or another, despite the efforts of “The Obstructor,’ Judge Gorsuch, will be on the Supreme Court before Tax Day. If there is a filibuster, Majority Leader Mitch McConnell (R-KY) will invoke the “nuclear option” which was not named after the deal Obama made with Iran. It takes away the filibuster and reduces the votes necessary to a simple majority.
Chuck ‘The Obstructor’ has already urged McConnell not  to take that step:

Republicans should not even think about using the nuclear option, saying, “Supreme Court Justices are always confirmed with a bi-partisan vote above the 60+filibuster threshold.

That’s not exactly true. Nominees made by Democratic Party Presidents usually zip through with little or no opposition.  However when evaluating candidates from GOP presidents the Democrats are not always as non-partisan as Republicans. Robert Bork, a brilliant jurist was slandered by Ted Kennedy and rejected, Justice Clarence Thomas was slandered and passed but with only 52 votes, and Justice Samuel Alito was approved with only 52 votes.

Sadly, Schumer’s call for a delay has nothing to do with the Democratic Party pushed investigation to see if Trump or his campaign colluded with Russia, nor does it have anything to do with precedent or senate tradition.  Senator Chuck ‘The Obstructor’ Schumer is proving that he doesn’t really care about the country as long as he can score political point’s by obstructing the operations of the government.

Understand …this isn’t about policy…”The Obstructor” isn’t arguing policy, and if he did unlike the previous president, Trump would probably invite him to the White House for negotiations.

No, Chuck “The Obstructor” doesn’t want to negotiate, he just wants to prevent the government from operating.