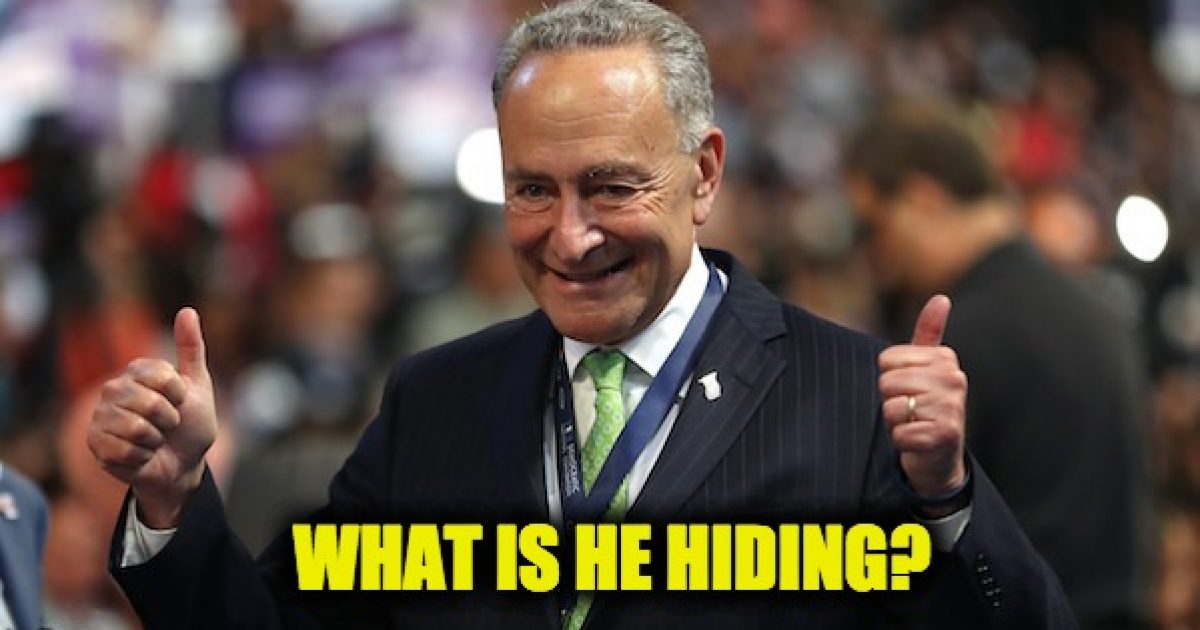 On Tuesday Senate Majority Leader Senator Chuck Schumer ripped the President’s call for the Justice Department to investigate reports about his 2016 campaign being spied on by the Obama Administration. Apparently, he does not believe that Americans have no right to know–why?

I think it’s totally inappropriate it would be inappropriate for the  White House to inquire of any ongoing investigation and put pressure to direct its outcome it’s even worse when the president is and his campaign are subject to that investigation so I think it’s very wrong and I think it shouldn’t be done it’s unprecedented it’s outrageous and it has overtones of things that would be done in a banana republic where the dictator just pushes what he wants done.

What’s the real problem Senator?  Is it typical liberal paternalism—Do you think the American people are not mature enough to understand? Are you protecting Barack Obama? The deep state? Or are you involved? Why are you so afraid of the American people finding out the truth?

For months Congressional oversight committees wanted to know about the origin of the Trump investigation, but the DOJ refused to turn over the documents despite the fact that oversight is one of Congresses constitutional duties. Why the refusal? These Senators and Congressmen have the highest clearance, so what is the DOJ covering up? Aren’t you a bit curious like the rest of us?

President Trump didn’t come up with the idea his campaign may have been spied on. It was broken by Chuck Ross at the Daily Caller. In his March 25,2018 report, Ross even named the “spy” as Cambridge Professor Stefan Halper. Kimberly Strassel wrote about the possible spy operation in the Wall Street Journal six weeks later on May 10th. But the story didn’t really build until it was picked up by the liberal media, The NY Times, told us the spying operation was called “Operation Crossfire Hurricane” and the Washington Post gave so much information about the spy that within 24 hours even liberals knew it was Stefen Halper.

By Sunday the “spy story” was everywhere, and the president finally demanded answers.  You call that un-American?

Senator Schumer, If you cared about this country instead of only caring about your party you would demand answers. Because if “Operation Crossfire Hurricane” really existed and was executed for political reasons, it doesn’t make America look like a banana republic, it makes us look like a police state.

Andrew McCarthy wrote a brilliant article in NRO explaining the suspicious ever-changing timeline of when the investigation began:

The real origination story begins in the early spring of 2016 — long before Page went to Russia and long before the U.S. government was notified about Papadopoulos’s boozy conversation with [the Australian] Downer(…)

Carter Page and Paul Manafort joined the Trump campaign in early spring, and the FBI was concerned about their possible ties to Russia. These were not trifling concerns, but they did not come close to suggesting a Trump-Russia espionage conspiracy against the 2016 election.

These FBI concerns resulted in a briefing of the Obama NSC by the FBI sometime in “late spring.” I suspect the “late spring” may turn out to be an earlier part of spring than most people might suppose — like maybe shortly after Page joined the Trump campaign.

(…) From the “late spring” on, every report of Trump-Russia ties, no matter how unlikely and uncorroborated, was presumed to be proof of a traitorous arrangement. And every detail that could be spun into Trump-campaign awareness of Russian hacking, no matter how tenuous, was viewed in the worst possible light.

The Trump-Russia investigation did not originate with Page or Papadopoulos. It originated with the Obama administration

So what is it, Senator? Is Andrew McCarthy correct? No matter if he is right or wrong, why can’t Americans know the truth? If “Operation Crossfire Hurricane” happened for legitimate reasons, why can’t we know those reasons? Why can’t we know if the operation was approved by a judge or as Mr. McCarthy suggests the Obama administration originated the investigation on their own for political reasons?

Senator, its hard understand why you aren’t flipping out at the very hint that this Spygate happened. How one administration could spy on the presidential candidate of the opposite party. Demanding answers as President Trump has is not anti-American. Refusing to allow American voters to get the answers, either because you put party before country, or covering up for the Obama administration, or covering up your own possible involvement…not allowing us to get answers for any reason, is anti-American.