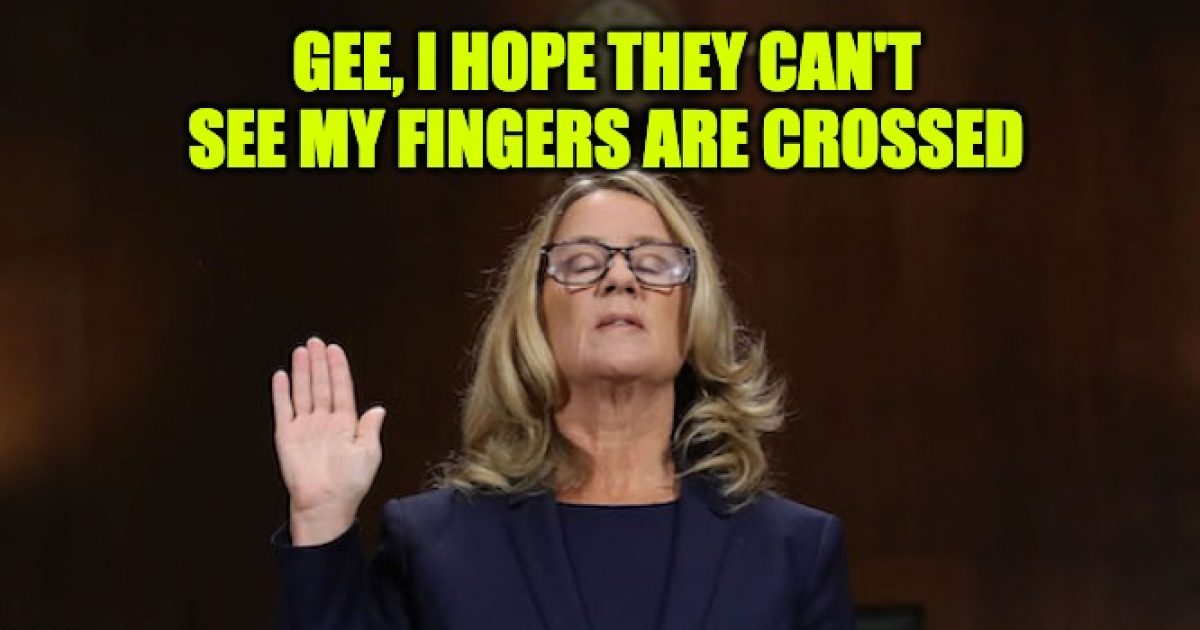 Christine Blasey Ford did not come forward to try and ruin Brett Kavanaugh’s life to do her “civic duty”  as she told the Senate Judiciary Committee. According to her attorney, she came forward to put “an asterisk” on his reputation before he could rule on Roe v. Wade. And now we are learning that Christine Blasey Ford, the accuser of Supreme Court Justice Brett Kavanaugh, couldn’t even convince her own father that Kavanaugh sexually abused her during her attempt to get Kavanaugh eliminated from the bench.

A new report says that Ford’s own father supported Kavanaugh for the Supreme Court even after his daughter became the face of the extreme left during Kavanaugh’s confirmation hearing.

According to the Federalist, “it appears the Blasey family had significant doubts about what Ford was trying to accomplish by coming forward and making unsubstantiated allegations against Brett Kavanaugh. Within days of Kavanaugh’s confirmation to the Supreme Court, a fascinating encounter took place. Brett Kavanaugh’s father was approached by Christine Blasey Ford’s father at the golf club where they are both members.”

“Ford’s father went out of his way to offer Ed Kavanaugh his support of Brett Kavanaugh’s confirmation to the Supreme Court, according to multiple people familiar with the conversation that took place at Burning Tree Club in Bethesda, Maryland,” The Federalist added.

“‘I’m glad Brett was confirmed,’ Ralph Blasey told Ed Kavanaugh, shaking his hand. … The conversation between the two men echoed a letter that Blasey had previously sent to the elder Kavanaugh,” the report continued.

Mollie Hemingway and the Judicial Crisis Network’s Carrie Severino also said that Ford’s father “presumably wouldn’t have supported the nomination of a man he believed tried to rape his daughter.”

Only the most sold out of leftists could have believed Ford’s tall tales about teenaged assault way back in the 1970s and 80s suddenly remembered 40 years later.

In fact, recently Ford’s own lawyer, Debra Katz, appeared to admit that the whole thing was nothing but a political hit job when she told an audience that the reason Ford became involved in the hearings was to put “an asterisk” next to Kavanaugh’s name in the event that Roe v Wade came up before the SCOTUS during his tenure.

Ford’s entire account was littered with lies, inconsistencies, and blank spots. Not only that, but not a single person in her life or Kavanaugh’s was able to substantiate anything she said in her false “testimony.” For example:

For starters, Ford still can’t recall basic details of what she says was the most traumatic event in her life. Not where the “assault” took place — she’s not sure whose house it was, or even what street it was on. Nor when — she’s not even sure of the year, let alone the day and month.

Ford’s not certain how old she was or what grade she was in when she says an older student violently molested her. (But she doesn’t plead inebriation: She described having just “one beer” at the party.)

It was clear from the start that Ford was a willing participant in a political hit job and lied through her teeth in a doomed effort to keep Kavanaugh off the high court.

Another bit of evidence that Ford’s own family thought she was lying is the fact that through what was presumably going through the toughest time in her adult life, not one member of Ford’s family was in Washington to support her, and not one of her family went public to say they were standing beside her. Per the Washington Post

A letter that began, “As members of Christine Blasey Ford’s family . . .”

It was signed by a dozen people. But none of them were related to Ford by blood. The letter was from the relatives of her husband, Russell Ford.

Christine’s own parents and siblings — the Blaseys — have not released any similar statement of support. As their daughter and sister has become the country’s most talked-about woman for accusing Supreme Court nominee Brett M. Kavanaugh of sexual assault while both were in high school, the Blaseys have strategically avoided the press. Voice mails, texts, emails and letters from reporters have gone unanswered. Friends have politely declined to comment on what the family is going through.

Parts of this post was first seen at GodFather Politics