Sen. Chris Murphy Lies, Says Trump Will Use Putin as Campaign ‘Surrogate’ Due to COVID (Video) 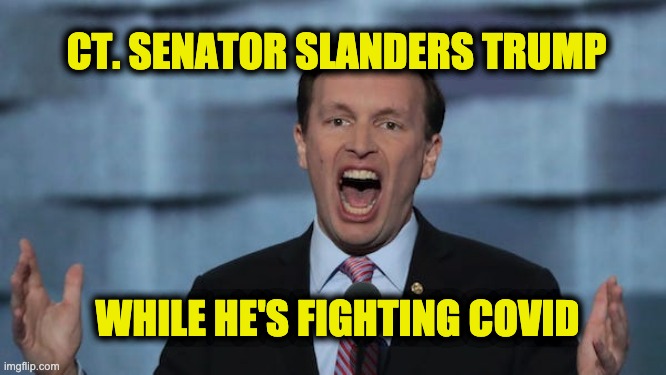 The Junior Senator from the state of Connecticut Chris Murphy has proven to be a heartless jerk, well either that or someone who hasn’t followed the news for the past year.  Instead of avoiding political hits as many Democrats have done since the President was diagnosed with COVID-19,  Murphy repeated a political lie about the POTUS, claiming on Friday that because President Trump will be absent from the campaign trail, he will rely more on Russian President Vladimir Putin to act as a “surrogate” for his reelection campaign.

Hey, Chris maybe you missed the news that day, but it’s been proven that neither President Trump nor his campaign colluded with the Russians.  We have learned recently, however, that the candidate you supported, Hillary Clinton was getting help from Russia.

Murphy was interviewed by Jim Sciutto on CNN and said:

“Well, what I can tell you is that it’s much bigger and bolder and smarter than it was in 2016. The Russians have learned and they are now trying to use U.S. persons and fake websites in order to proffer a narrative that helps President Trump’s re-election. And I also think that you have to be much more serious about the Russian threat given today’s news. If President Trump can’t be out there on the campaign trail for the next two weeks, then he is going to rely on his surrogates and, unfortunately, one of his surrogates is Vladimir Putin, so you are likely going to see this campaign ramped up by Russia over the next few weeks to try to substitute for the President’s absence on the campaign trail. And my worry is that the intel agencies are not being clear with the American people about the size of the Russian operation and their clear desire to try to elect President Trump to a second term.”’

We already have the Mueller report saying that there was no collusion, and the latest evidence indicates that the Russia Hoax was indeed a hoax.

Earlier last week we learned that the initial report from the CIA was that Russia wanted Hillary Clinton to win because Trump was too unpredictable. John Brennan rewrote that report to make the Trump-Russia story. “Analysts said they also came under political pressure to back Brennan’s judgment that Putin personally ordered ‘active measures’ against the Clinton campaign to throw the election to Trump, even though the underlying intelligence was ‘weak.'”

We also learned via a letter from DNI Radcliffe that American intelligence discovered from Russian intelligence that Hillary Clinton “had approved a campaign plan to stir up a scandal against U.S. Presidential candidate Donald Trump by tying him to Putin and the Russians’ hacking of the Democratic National Committee.” In other words, it looks like Crooked Hillary may have started the Russia Hoax.

The President of the United States is in the hospital fighting COVID-19.   No matter who he supports in the election next month Senator Murphy and every patriotic American should be supporting his recovery, so the President/leader of the free world will be back at full strength and in the Oval Office.

But Chris Murphy instead took the opportunity to slander the President with a charge that’s been proven false, proving the Connecticut Senator is a political hack, not a patriot.

Below is a video of the Murphy interview.