The thought of Matthews being forced to "quit" gives me a tingle down my leg. 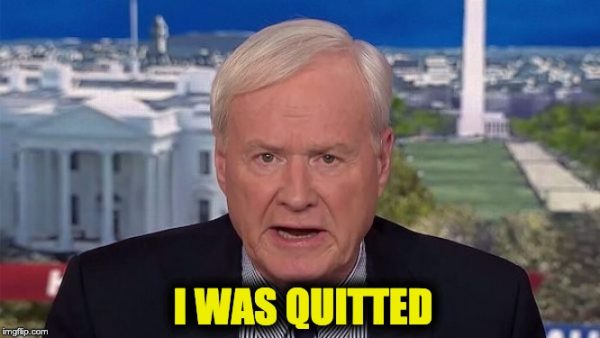 Chris Matthews, the man who Barack Obama gave a tingle down his leg announced his “retirement” during Monday’s night’s airing of his talk show, “Hardball.”

Matthews, 74, said he and MSNBC had mutually agreed to part ways, which is what TV people usually say when they are fired but it didn’t seem as though the network expected him to leave tonight.  But it also seems strange for someone like Matthews to leave in the middle of a presidential election season and a day before Super Tuesday (super Thursday if Joe Biden is reading this).  A possible scenario is the network told him he was going to be out soon and Matthews screwed them up by quitting immediately.

“Let me start with my headline tonight: I’m retiring. This is the last ‘Hardball’ on MSNBC,” Matthews announced at the top of his show. “And obviously, this isn’t for the lack of interest in politics. As you can tell, I loved every minute of my 20 years as host of ‘Hardball.’ Every morning I read the papers and I’m gung-ho to get to work. Not many people have had this privilege. I loved working with my producers and our discussions we’d have on how we report the news. And I love having this connection with you, the people who watch.

I’ve learned who you are, bumping into you on the sidewalk or waiting in an airport and saying hello. You’re like me. I hear from your kids and grandchildren. My dad loves you, my grandmother loves you. We watched it till the end.

After conversations with NBC, I decided tonight will be my last ‘Hardball.’ So let me tell you why. The younger generations out there are ready to take the reigns. We see them in politics, in the media, and fighting for their causes….

Yep and the younger generation of women objected to his advances

Compliments on a woman’s appearance that some men, including me, might have once incorrectly thought were okay were not okay, not then and certainly not today. And for making such comments in the past, I’m sorry.

He’s sorry..he’s sorry he got forced out, see video:

MSNBC aired a commercial following the announcement and Matthews did not return to the show. Steve Kornacki, took over the rest of the hour and looked shocked by the news. “That was a lot to take in,” he said, saying it had been an honor to work with Matthews, and then began a discussion about the coronavirus response.

The move comes after Mr. LegTingle was accused of another incident of making inappropriate comments to a female guest.

A freelance journalist said in a column published Friday that veteran MSNBC anchor Chris Matthews made inappropriate comments to her while she was getting ready to appear on his program – the latest account of allegedly insensitive behavior over the years by the longtime political commentator.

Writing in GQ, journalist Laura Bassett described a 2016 encounter with Matthews while sitting in a makeup chair to appear on “Hardball,” the program he has anchored for many years. She writes: “Matthews looked over at me in the makeup chair next to him and said, ‘Why haven’t I fallen in love with you yet?’ When I laughed nervously and said nothing, he followed up to the makeup artist. ‘Keep putting makeup on her, I’ll fall in love with her.’”

Matthews was reprimanded after being accused in 1999 of making inappropriate comments about a female employee, and the woman received a payment as a result, MSNBC confirmed in 2017. The network found Matthews made comments that were deemed to be in poor taste, but also determined they were not meant as propositions.

In her article, Bassett cites several instances when Matthews’ behavior allegedly made female guests, co-workers or contributors uneasy on set or behind the scenes of the program.

What was the conversation he had with MSNBC that led him to quit on air? It couldn’t have been good. Eventually, it will come out. But I must admit, the thought of Matthews being forced to “quit” gives me a tingle down my leg.