Cop Running Against Ilhan Omar Calls Her An ‘Absentee Landlord,’ And Voters Unhappy 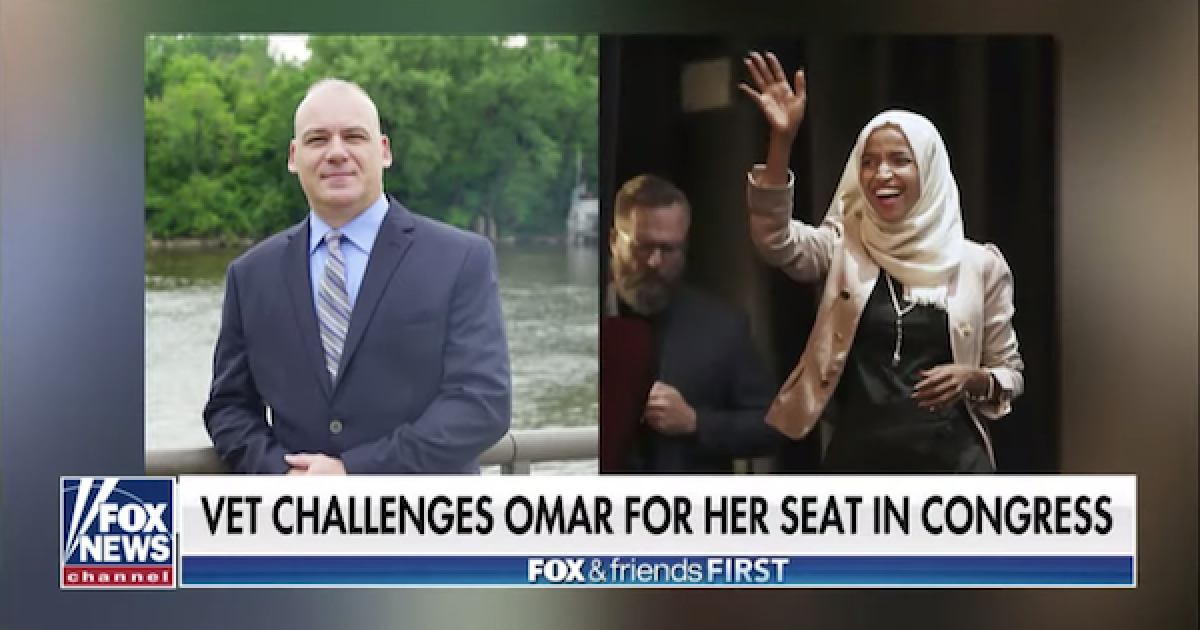 Chris Kelley, who announced that he is coming for Ilhan Omar’s congressional seat in back in July, slammed the Minnesota Democrat for abandoning her constituents, referring to her as an “absentee landlord.”

Kelley, who currently works as an officer for the Minneapolis Police Department and was a 27-year veteran of the U.S. Army and Army Reserves, made the comments during an interview on ‘Fox & Friends: First.’

He explained that as a police officer, he has the ability to talk to people as he works the streets. And they don’t like what they’re seeing out of Omar.

Whether it’s in her Somali community or “just everybody else I come in contact with,” Kelley believes the people of her district have grown tired of Omar acting like a rock star instead of working for the people.

“She’s traveling the world. She’s fighting the president on Twitter. She’s not doing anything in the district,” Kelley said relaying complaints from the people he’d like to represent. “And, I can say firsthand, the homelessness, the opioid problems, and other issues aren’t improving.”

Chris Kelley also took Omar and Minneapolis Mayor Jacob Frey to task for using political intimidation tactics to prevent a rally for President Trump at the Target Center in Minnesota.

Frey managed to get the facility to charge the President’s campaign $530,000 for security when former President Barack Obama was only charged $20,000.

….In fact, the “Cops For Trump” T-shirt Web Site CRASHED because of incredible volume, but is now back up and running. Proceeds go to the Police Union Charities. See you on Thursday night in Minneapolis!

“Both [Frey] and Ilhan Omar are speaking against the president coming here today and I think that will embolden certain groups to come out and to try and cause problems,” Kelley explained.

Kelley also noted on Twitter that the two Democratic officials are putting officers in danger by “weaponizing citizen safety for political reasons.”

.As soon as @realDonaldTrump announced MN rally @Jacob_Frey & @IlhanMN poured fuel on the flames political discord. Freedom of speech is guaranteed in the US Constitution, mayhem, violence & anarchy are not. Never fear the @MinneapolisPD & I are equal opportunity arresters

“It is frustrating. We should welcome any sitting president coming here,” Kelley continued.

“We’ve welcomed other presidents with open arms and now because there’s a disagreement or we have a president across a different aisle, there’s an issue here. So, I believe we should disagree with dignity.”

Omar and beta Frye are significantly lacking in the dignity department.

Kelley originally announced his plans to challenge Omar this past summer, saying he was motivated to run after he saw her comments at a meeting with the Council on American-Islamic Relations (CAIR). In those comments, she dismissed the September 11th terror attacks, describing them as “some people did something.”

Democrat Rep. Ilhan Omar refuses to acknowledge why her "some people did something” comment regarding 9/11 was offensive. pic.twitter.com/o0fnST0JBX

“September 11 was a terrible loss of life, not just for police officers and firefighters and other first responders, but 3,000 people and non-combatants died, and to be dismissive of that was an outrage,” Kelley criticized.

As for the race, the Iraq war veteran thinks he has a solid chance to win.

“You’re going to have a lot of people coming out, and I think we have an excellent chance of coming out on top,” he said during the interview.

Omar, according to most recent polls, has a negative approval rating.