It seems that Richard Blumenthal, Connecticut Attorney General and odds-on favorite to succeed Chris Dodd as the next Senator from Connecticut, is already experienced enough to hold the position, according to the NY Times, Blumenthal has been embellishing his biography (as in misleading and lying).

For example at 2008 ceremony honoring veterans and senior citizens who sent presents to soldiers overseas, Blumenthal  rose and spoke of an earlier time in his life.

“We have learned something important since the days that I served in Vietnam,” Mr. Blumenthal said to the group gathered in Norwalk in March 2008. “And you exemplify it. Whatever we think about the war, whatever we call it — Afghanistan or Iraq — we owe our military men and women unconditional support.”

Only one problem, Blumenthal never served in Vietnam. As you can see by the document below, he obtained at least five military deferments from 1965 to 1970 and took repeated steps that enabled him to avoid going to war. 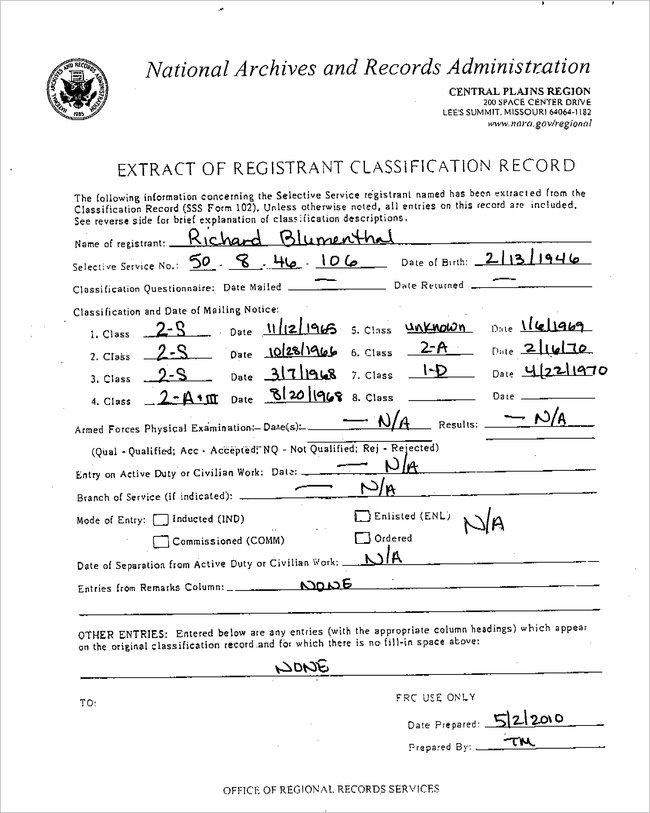 The deferments allowed Mr. Blumenthal to complete his studies at Harvard; pursue a graduate fellowship in England; serve as a special assistant to The Washington Post’s publisher, Katharine Graham; and ultimately take a job in the Nixon White House.


In 1970, with his last deferment in jeopardy, he landed a coveted spot in the Marine Reserve, which virtually guaranteed that he would not be sent to Vietnam. He joined a unit in Washington that conducted drills and other exercises and focused on local projects, like fixing a campground and organizing a Toys for Tots drive.

The his “service record” would not be an Issue if it weren’t for the fact that he blatantly lied, trying siphon off some of the glory from the real heroes who served over-seas just to embellish his political resume.

Sometimes his remarks have been plainly untrue, as in his speech to the group in Norwalk. At other times, he has used more ambiguous language, but the impression left on audiences can be similar.


In an interview on Monday, the attorney general said that he had misspoken about his service during the Norwalk event and might have misspoken on other occasions. “My intention has always been to be completely clear and accurate and straightforward, out of respect to the veterans who served in Vietnam,” he said.


But an examination of his remarks at the ceremonies shows that he does not volunteer that his service never took him overseas. And he describes the hostile reaction directed at veterans coming back from Vietnam, intimating that he was among them.


In 2003, he addressed a rally in Bridgeport, where about 100 military families gathered to express support for American troops overseas. “When we returned, we saw nothing like this,” Mr. Blumenthal said. “Let us do better by this generation of men and women.”

When we returned?  Sure that Washington DC to NYC Shuttle can be a killer, but that is the only return he made during that time.

At a 2008 ceremony in front of the Veterans War Memorial Building in Shelton, he praised the audience for paying tribute to troops fighting abroad, noting that America had not always done so.


“I served during the Vietnam era,” he said. “I remember the taunts, the insults, sometimes even physical abuse.”

This is the Attorney General of the State, shouldn’t he know all about the the bad things that can happen when you lie? Maybe the taunts, insults and physical abuse he “received” were a result of his lying.

But the way he speaks about his military service has led to confusion and frequent mischaracterizations of his biography in his home state newspapers. In at least eight newspaper articles published in Connecticut from 2003 to 2009, he is described as having served in Vietnam.


The New Haven Register on July 20, 2006, described him as “a veteran of the Vietnam War,” and on April 6, 2007, said that the attorney general had “served in the Marines in Vietnam.” On May 26, 2009, The Connecticut Post, a Bridgeport newspaper that is the state’s third-largest daily, described Mr. Blumenthal as “a Vietnam veteran.” The Shelton Weekly reported on May 23, 2008, that Mr. Blumenthal “was met with applause when he spoke about his experience as a Marine sergeant in Vietnam.”

And the idea that he served in Vietnam has become such an accepted part of his public biography that when a national outlet, Slate magazine, produced a profile of Mr. Blumenthal in 2000, it said he had “enlisted in the Marines rather than duck the Vietnam draft.”

That’s not the only lie, In press profiles, a Slate article and a magazine article in The Hartford Courant in 2004 with which he cooperated, Mr. Blumenthal is described prominently as having served as captain of the swim team at Harvard. You guessed it, he was never on the team, but he did have a yellow rubber ducky and he knew the entire rubber ducky song from Sesame Street.

Richard Blumenthal is the perfect Candidate to Replace Chris Dodd as Senator from the Great State of Connecticut, that is if Connecticut wants more of the same, a Senator who is not always honest with his constituents.

There is one life experience that Blumenthal can honestly claim.  When he appeared on the Glenn Beck Show last year, he provided absolutely nothing except for political grandstanding, which roused Beck’s BS meter. Poor Blumenthal was toast(watch the video below).