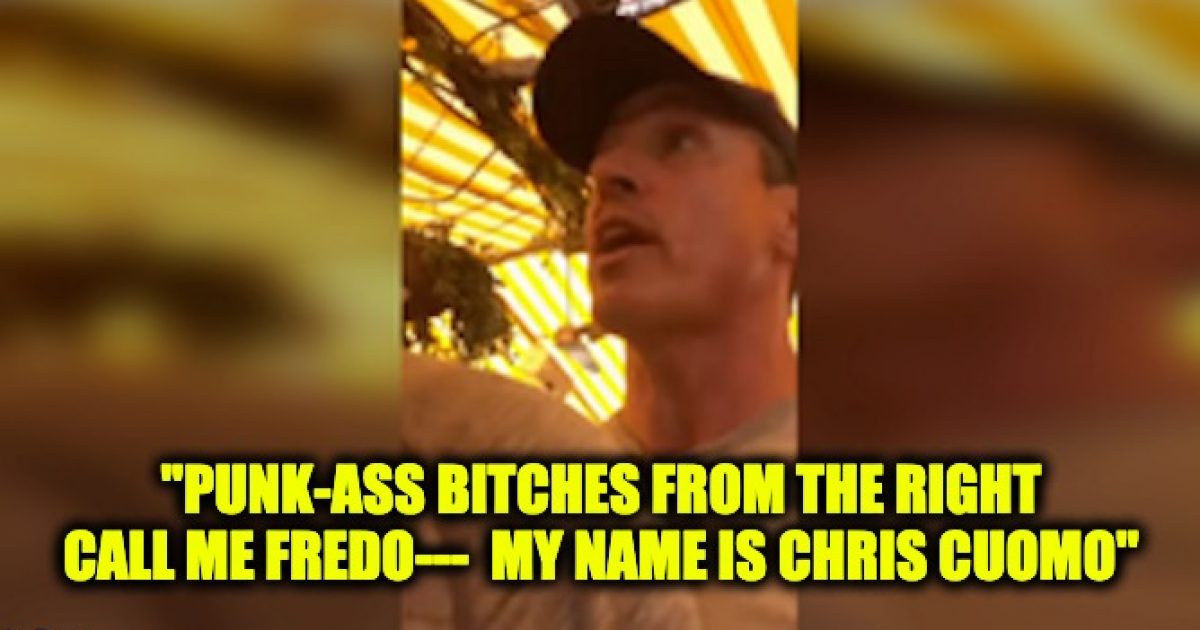 I’ve always said that Chris Cuomo of CNN was the dumber of the two Cuomo brothers (although neither one of them could become a brain surgeon) Apparently, there’s a heckler who agrees. He called the CNN anchor “Fredo” and Cuomo went stark raving mad, frothing from the mouth-type crazy–perhaps breaking Al Pacino’s record for “F” bombs in a short period (although Pacino did it in a movie).

“I’ll f**king ruin your shit. I’ll f**king throw you down these stairs like a f**king punk,” Cuomo told the man.   Newsbusters counted every “F” bomb and reported 25 of them as he berated man who called him Fredo.

For those who don’t remember,  Fredo Corleone, who was Michael Corleone’s older brother, but he is weaker and less intelligent than his brothers, and he was considered to be the failure. In Godfather 2, Fredo turns traitor and Michael who took over the crime family after his father died, gives his brother the kiss of death and has him whacked.

Apparently, Fredo’s been a favorite jab at Cuomo from people on the right because he is not considered the sharpest pencil in the box. But according to Cuomo, it’s an anti-Italian ethnic slur on par with the “N-word.” I’ve heard many slurs for many different ethnicities, but this what the first time I ever heard that Fredo was a slur about Italians. But in this case, Fredo made Chris Cuomo lose it.

To be honest Cuomo over-reacted but the guy who called him Fredo was a jerk.  I am sure Chris Cuomo deals with tons of criticism (much of it deserved), but by starting off the discussion by calling Cuomo, “Fredon” no matter which meaning he meant didn’t help him make the point—just pushed Cuomo’s buttons.

Cuomo should have walked away, and he should realize the reason some on the right call him names is that he is very biased.

Apparently, Cuomo agrees that he overreacted, he posted this on Tuesday morning:

Unidentified Man 1: I thought that’s who you were.

Chris Cuomo: No, punk ass bitches from the right call me Fredo. My name is Chris Cuomo, I’m an anchor on CNN. Fredo is from The Godfather. He was that weak brother. And they use it as an Italian aspersion. Any of you Italian?

Man: I got a little bit Italian.

Cuomo: Are you Italian? It’s a f**king insult to your people.

Unidentified Man 2 (from off camera): I didn’t know that.

Cuomo: It’s an insult to your f**king people. It’s like the N-word for us. Is that a cool f**king thing?

Man 1: You’re a much more reasonable guy in person than you seem to be on television.

Cuomo: But if you want to play then we’ll f**king play. If you got something to say about what I do on television, then say it. Don’t be a [inaudible] and call me a f**king insult.

Cuomo:Yeah, but you’re going to have a big f**king problem.

Cuomo: It’s a little different on TV. Don’t f**king insult me like that.

Cuomo: What the f**k? You called me Fredo. It’s like I call you punk bitch. You like that? You want that to be your nickname?

Cuomo: You called me Fredo. You know my name’s not f**king Fredo.

Man 1: I though that’s what your name was.

Cuomo: You did not think my name was f**king Fredo. Don’t be a liar.

Man 1: I thought you name was—

Cuomo: You want to be a man, stand up like a man.

Cuomo: Then f**king own it. Then own what you said.

Cuomo: Then f**king own it. Then own what you said.

Cuomo: You’re going to have a f**king problem.

Man 1: What? What are you going to do about it?

Cuomo: So you can f**king sue?

Cuomo (presumably at Man 2): Watch your f**king hands….Take a swing. No, no. Come on boy. You want to call me shit, call me shit then. I’m right f**king here.

Man 1: I’m not doing anything.

Cuomo: You didn’t know what you were doing when you called me Fredo?

Unidentified Man 4: Break it up.

Cuomo: You didn’t know what you were saying?

Cuomo: You thought my name was f**king Fredo?

Cuomo: "You're going to have a problem"

Man: "What are you going to do about it?"

Cuomo: "I'll fuckin ruin your shit. I'll fucking throw you down these stairs"