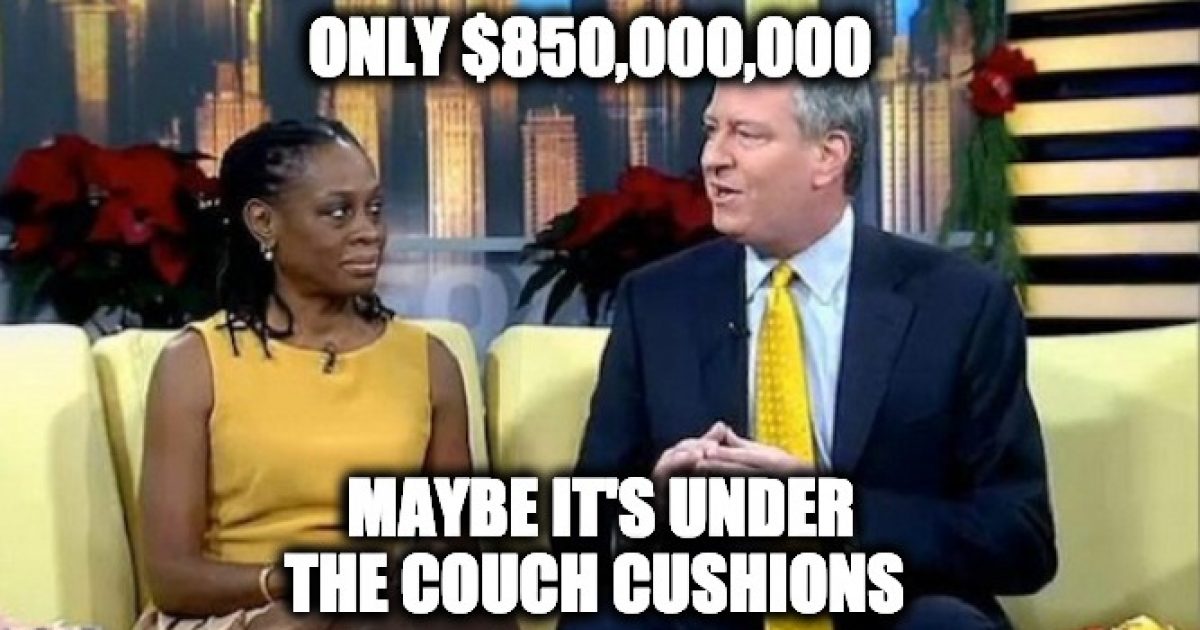 Damn! It’s always in the last place you look.  I wonder if she tried looking under the couch cushions, or maybe it fell behind the bedroom dresser? Bill de Blasio’s wife can’t account for the staggering amount of taxpayer money that the NYC Mayor gave her for mental health project. Chirlane McCray was assigned an $850 million budget for her ThriveNYC program, but records show scheme has failed to keep track of what it spent the money on. Where has it gone?

Maybe it fell between the car seats, or it’s in her other purse?

Where has $850m gone? Bill De Blasio's wife can't account for staggering amount of taxpayer money that the NY Mayor gave her for mental health project https://t.co/snnCUTrzvB
Keeping It In The Family pic.twitter.com/0ahVUxfjE3

Bill de Blasio’s wife Chirlane McCray cannot explain where $850million given to the mental health program she champions has gone, according to reports.

In the three years it has been running, organizers at ThriveNYC have largely failed to keep records of the initiative’s achievements – and data that has been collected shows it lagging well behind targets.

You know coffee is really expensive in NYC, maybe she spent it all on buying coffee for the staff, or perhaps not just coffee but a bagel and schmear too. You know $850million doesn’t go far when buying those NYC breakfasts. That’s how it can work, one bagel leads to two…to ten…and all that coffee…pretty soon you’ve blown through a few hundred million dollars.

Despite that, the program has been granted an even bigger budget going forward and is now on track to spend $1billion over five years.

The data comes from a Politico report that shows those running the scheme have largely failed to measure its impact or keep track of spending.

Thrive said it has developed a list of 417 metrics to measure how effective the program is moving forward, but asked to assess its impact so far, Politico said the data was piecemeal and showed a largely failing picture.

For example, 29 hospitals had agreed to screen almost 78,000 new mothers for post-natal depression each year as part of the scheme.

Maybe the organization was also buying breakfast for the 570 patients, but not hamburgers because AOC would object. After all, averaging $1,500,000 per patient without any record keeping isn’t a lot of money…is it?

I wonder if their dog ate it?

That’s a staggering amount of public funds to be squandered in this way. A full audit needs to be carried out, and further funds stopped. At the very least they should check under the carpet.

This should be a front page story but don’t expect this to be reported by the MSM as she is the wife of the extremely leftist mayor! We all know how leftists like to spend taxpayer money. The media will see it as “same old, same old.”