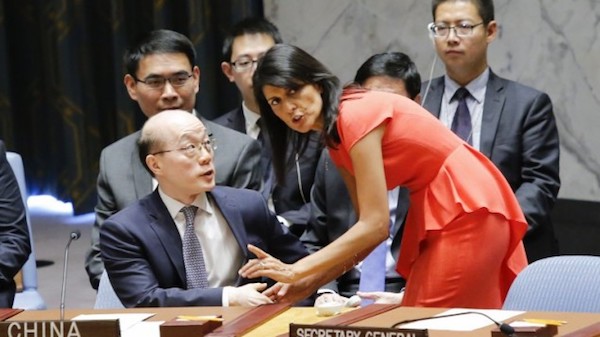 On Saturday the UN Security Council (UNSC) unanimously voted to sanction North Korea in retaliation for their recent intercontinental ballistic missile tests.The resolution written by the U.S. bans North Korean exports of coal, iron, iron ore, lead, lead ore and seafood. It also bans countries from increasing the number of North Korean laborers in their homelands and stops new joint ventures with North Korea and any new investments in existing ones

Both Russia and China which could have vetoed the resolution voted in favor of the sanctions.

On Sunday, Rex Tillerson, as well as the foreign ministers of Russia, China, and North Korea, were in Manilla for the meeting of the Association Of Southeast Asian Nations (ASEAN). Chinese Foreign Minister Wang Yi, met with North Korea’s top diplomat during the ASEAN Manila meeting and urged the North Koreans to “maintain calm” despite the security council vote, and then he warned Kim Jung Un’s representative, “Do not violate the U.N.’s decision or provoke international society’s goodwill by conducting missile launching or nuclear tests,”

Susan Thornton, the assistant secretary for East Asian and Pacific affairs, “said that the United States would be “watchful” to ensure that China did not slip from its adherence to the new sanctions, which she characterized as the strongest in a generation. ‘We want to make sure China is continuing to implement fully the sanctions regime,’ she said. ‘Not this kind of episodic back and forth that we’ve seen.’”

Perhaps that cake President Trump served China President Xi Jinping at Mar-a-Lago is starting to work. After the security council vote, the White House released a statement which said in part:

“The President appreciates China’s and Russia’s cooperation in securing passage of this resolution…He will continue working with allies and partners to increase diplomatic and economic pressure on North Korea to end its threatening and destabilizing behavior.”

Obviously, the Security Council vote and today’s admonition by the Chinese foreign minister was just a start, but it was a darn good start. It looks as though the president’s pressure on China is having an effect. And kudos need to go out to our U.N. Ambassador Nikki Haley, who negotiated the resolution, convincing China and Russia to give it their support.