NOT JOKE: China Is Drawing A Line Atop Mt. Everest To Stop Spread Of COVID-19 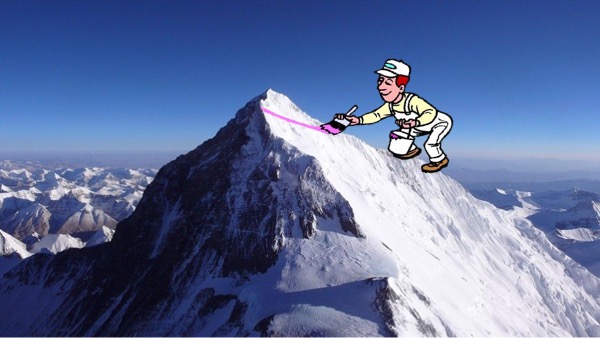 Is this a real problem? It seems a bit unlikely that someone with the Coronavirus would be climbing to a peak of 29,000 feet…

Nepal is currently struggling to cope with a massive outbreak of COVID-19.  Approximately 9,000 people per day are being infected. China doesn’t want the virus to return to the land where it began, so they’re doing whatever they can to prevent outbreaks.

China has decided on a unique solution to deal with the spread of the Coronavirus by putting up some border marker at the peak of Mount Everest to delineate the Chinese side from the Nepalese side. It’s unclear how the border will be enforced, however, or if that is even possible. Are they going to send one person with a giant can of paint and a brush to draw a line on the world’s tallest mountain?

Chinese officials have come up with an unusual plan to stop the spread of COVID-19 at the top of the world: they’re going to draw a line through the peak of Mount Everest.

The sitcom-like strategy is a response to Nepal‘s struggles with the Coronavirus, which has afflicted several cities and reportedly spread to tourists at base camp on the Nepali side of the mountain.

Chinese state media announced on Monday that a team of 21 Tibetan climbers will scale Everest in order to set up a separation line between the Chinese and Nepali sides of the summit. The line is meant to prevent climbers from interacting on the tiny mountaintop, the country’s Xinhua News Agency reports.

The mountain peak is just a small mound of snow with space for about six climbers and guides, so putting up a “border” will be tricky. It’s also above an area called the “death zone,” where many have died due to a lack of oxygen, so putting a guard up there isn’t an option. But then again, when was the last time the  CCP cared about human lives?

Besides all of that, the idea that someone who has contracted a respiratory illness like the Coronavirus would be able to make it to the peak when there is already an oxygen issue is just ridiculous. “The idea that anyone with COVID-19 could even reach the summit is impossible because climbers with any respiratory difficulties will just not be able to reach the altitude,” said Ang Tshering Sherpa, a veteran mountaineering expert.

He also said that climbers from each side take completely different routes to the mountain’s peak and would only meet at the summit. Even if they do meet up there, they would be wearing heavy gear, including face coverings to protect them from the elements.

So, this is basically a pointless move by China to make it look like they’re actually doing something besides allowing the world to be infected COVID.  I guess we shouldn’t be surprised. This is precisely how the World Health Organization conducted its 2-week investigation into the origin of the Coronavirus more than a year after it had been released on the world.