China Lied, People Died And The WHO Was Complicit 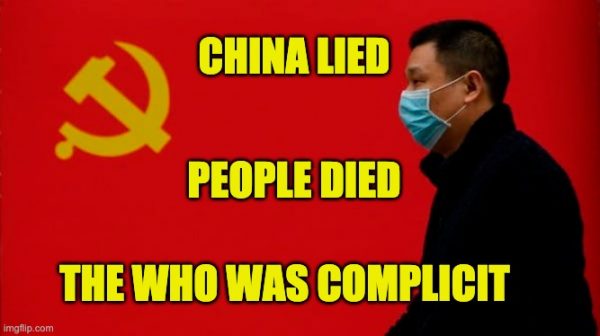 When Senator Cotton suggested that COVID-19 may have come from a Level 4 laboratory located in Wuhan China that was researching Corona Viruses, the MSM said he was a bat-sh*t crazy conspiracy theorist.”

But now it’s looking as if he may have been correct and the virus didn’t come from someone eating bat stew. Sources have told Fox News that the origin of the COVID-19 pandemic wasn’t the wet market in Wuhan but the Virology Institute that studies coronaviruses in bats just a few miles away. And a systematic disinformation campaign by China and the WHO had dismissed the lab story as a tinfoil-hat conspiracy theory.

There weren’t simultaneous outbreaks of identical illness, there was only one source, and that point of origin seems to be that research facility in Wuhan.

There is increasing confidence that COVID-19 likely originated in a Wuhan laboratory, though not as a bioweapon but as part of China’s effort to demonstrate that its efforts to identify and combat viruses are equal to or greater than the capabilities of the United States, multiple sources who have been briefed on the details of early actions by China’s government and seen relevant materials tell Fox News.

This may be the “costliest government coverup of all time,” one of the sources said.

The sources believe the initial transmission of the virus was bat-to-human, and that “patient zero” worked at the laboratory, then went into the population in Wuhan. 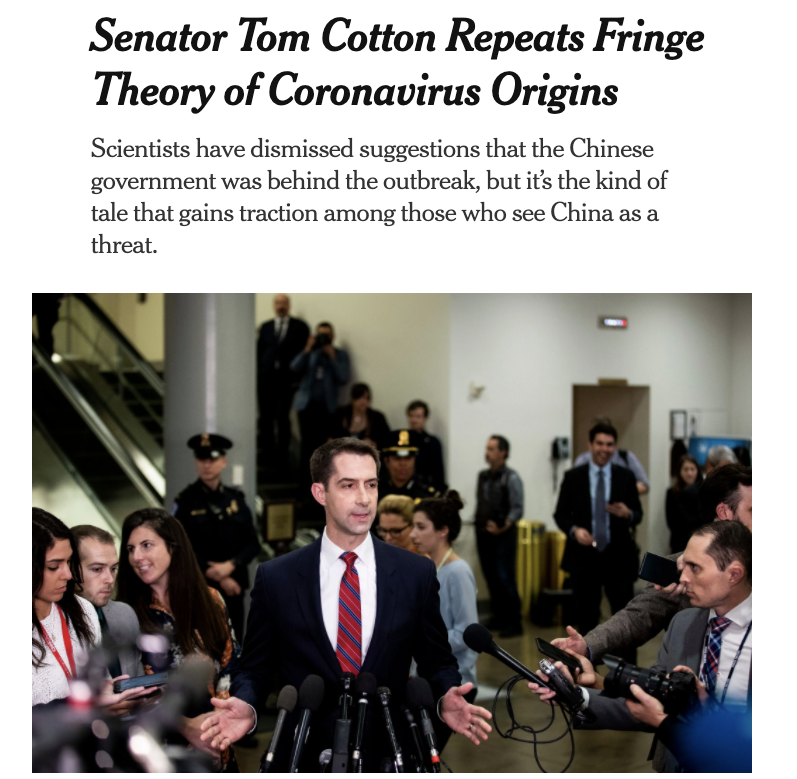 Costly is an understatement.  As of this writing, the Wuhan virus killed almost 165,000 people worldwide.

Documents detail early efforts by doctors at the lab and early efforts at containment. The Wuhan wet market initially identified as a possible point of origin never sold bats, and the sources tell Fox News that blaming the wet market was an effort by China to deflect blame from the laboratory, along with the country’s propaganda efforts targeting the U.S. and Italy.

On Wednesday evening, Secretary of State Mike Pompeo appeared on The Story with Martha McCallum and said that the U.S. government is “working diligently” to figure out the origin of the virus.

Secretary Pompeo told Martha McCallum, “What we do know is we know that this virus originated in Wuhan, China. We know there is the Wuhan Institute of Virology just a handful of miles away from where the wet market was. There is still lots to learn. You should know that the United States government is working diligently to figure it out.”

Concerning the State Department cables warning about the Wuhan laboratory, Pompeo said the installation “contained highly contagious materials — we knew that, we knew that they were working on this program, many countries have programs like this. In countries that are open and transparent, they have the ability to control them and keep them safe, and they allow outside observers in to make sure all the processes and procedures are right. I only wish that that had happened in this place.”

Additionally, the sources tell Fox News the World Health Organization (WHO) was complicit from the beginning in helping China cover its tracks.

Trump announced at the White House coronavirus news briefing in the Rose Garden on Tuesday that the United States will immediately halt all funding for the WHO, saying it had put “political correctness over lifesaving measures.” The United States is the WHO’s largest single donor, and the State Department had previously planned to provide the agency $893 million in the current two-year funding period.
Source: Fox News

President Trump is absolutely correct to withhold funding from the World Health Organization if they were indeed complicit in assisting China in a massive cover-up. The actions of the Chi-Coms and the WHO have had the incalculable cost of over a hundred thirty-eight thousand deaths and counting.

The Chinese Communist Party was literally lecturing people that it was “racist” to call the coronavirus a “Chinese” virus or say that it originated in Wuhan as they spread disinformation that it was introduced to China by the United States. Then they used the World Health Organization to insist that there was no human-to-human transmission despite knowing otherwise. Chinese doctors who warned people about the virus were tossed in jail (or worse) which is extreme even for communist China.

Now we’re in a global pandemic and economies are taking a massive hit due to lockdowns to contain the spread.

And this is just the first wave. It is going to come back again and again, and we cannot simply shut everything down every time it does. China Lied, People Died and the WHO was complicit. We need to rethink how we interact with both China and the WHO going forward.