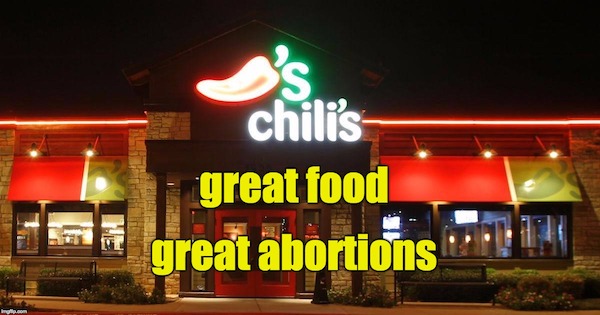 Folks in Indiana and Kentucky, please know that your local Chili’s restaurants are doing their very best to support Planned Parenthood (PP).

Yes, you heard me right. If you visit any Kentucky or Indiana Chili’s location between January 1st and March 31st and hand them a special group/charity coupon, 15% of the cost of your meal would go to funding the murder of local children.

Earlier this week the Planned Parenthood affiliates in Indiana and Kentucky posted a promo code that their supporters could use to make sure that Chili’s would donate a portion of the cost of their meal to support PP. The flyer says that PP fans could bring the voucher to any of the named Chili’s locations and can be used be those dining in or picking up “to go” orders. 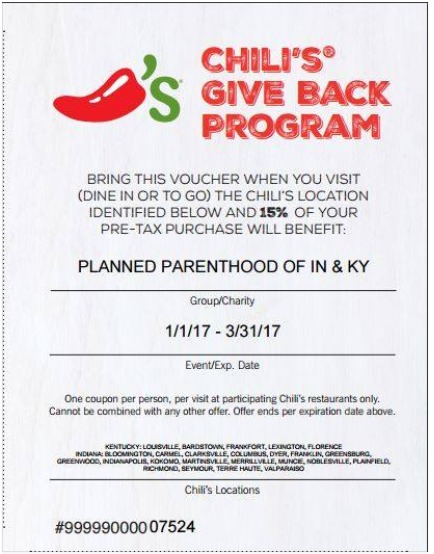 This isn’t the first time that Chili’s has tried to find a way to get more money to Planned Parenthood. Back in 2011 a Chili’s restaurant in California set up a fundraiser for their local abortion mill but ended up canceling the event after realizing that it would alienate a large portion of their customer base.

According to a spokesperson for Chili’s parent company, Brinker International, Inc., “The event was canceled after hearing growing concerns from our guests.” Management of the Natomas Chili’s received numerous calls, as the Sacramento community expressed concerns about Chili’s restaurant donating money to Planned Parenthood, which performs over 330,000 abortions every year.

Wynette Sills, a local pro-life advocate who had been monitoring the situation, told LifeNews today, “The Chili’s fundraiser for Planned Parenthood was brought to my attention on Wednesday, July 27, the night before the event.  By the next morning, Chili’s decided to cancel the Planned Parenthood fundraiser due to guest complaints.”

Sills says the cancellation “is a significant and abrupt change of opinion for the restaurant chain” as a flier announcing the fundraiser originally proclaimed “Chili’s proudly supports Planned Parenthood” and invited customers to bring in the promotional flyer so Chili’s could donate 15 percent of the customer’s bill to the Planned Parenthood Mar Monte’s Sacramento affiliate.

If you want to let Chili’s corporate know how you feel about their company’s decision to support the genocide of the next generation, click here and fill their email inbox with your opinions. Every pro-life American should be reaching out to rattle Chili’s chains and to let them know that we won’t spend our hard-earned dollars at any restaurant that supports the murder of children.