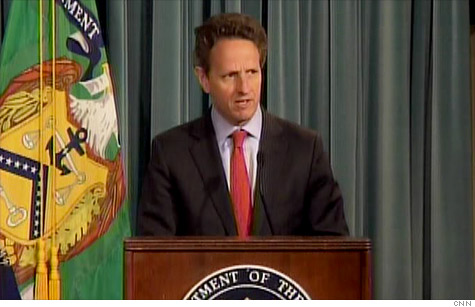 Ten days ago when the Medicare Trustees sent their annual report over to Congress painting a grim picture for the future of Medicare, it was well covered by the press.  Strangely though there was one “little part” the Geithner and  press omitted, an addendum written by chief medicare reporting that the trustees presented too rosy a picture in their projection.  Make that way too rosy!

When the report was originally released on May 13th, Politico reported:

The new Medicare trustees report says the trust fund is now likely to run out of money in 2024, five years earlier than predicted last year….

At a press briefing, Treasury Secretary Timothy Geithner said the change in the projection was due to “technical changes in the economic assumptions underlying the projections.”

CMS also said the passage of the health care reform law added eight years of life to the Medicare trust fund. Without the law, the agency said, the trust fund would go into the red in 2016.

But if you look at the actual report, beginning on page 265, Richard Foster, the Chief Medicare actuary has a much different opinion than the politicians who created the report Turbo-tax Tim presented to the public almost two weeks ago. He basically said the projections made by the politicians were bogus.

Further, while the Affordable Care Act makes important changes to the Medicare program and substantially improves its financial outlook, there is a strong likelihood that certain of these changes will not be viable in the long range. Specifically, the annual price updates for most categories of non-physician health services will be adjusted downward each year by the growth in economy-wide productivity. The best available evidence indicates that most health care providers cannot improve their productivity to this degree—or even approach such a level—as a result of the labor-intensive nature of these services.

Without major changes in health care delivery systems, the prices paid by Medicare for health services are very likely to fall increasingly short of the costs of providing these services. By the end of the long-range projection period, Medicare prices for hospital, skilled nursing facility, home health, hospice, ambulatory surgical center, diagnostic laboratory, and many other services would be less than half of their level under the prior law. Medicare prices would be considerably below the current relative level of Medicaid prices, which have already led to access problems for Medicaid enrollees, and far below the levels paid by private health insurance. Well before that point, Congress would have to intervene to prevent the withdrawal of providers from the Medicare market and the severe problems with beneficiary access to care that would result. Overriding the productivity adjustments, as Congress has done repeatedly in the case of physician payment rates, would lead to far higher costs for Medicare in the long range than those projected under current law.

For these reasons, the financial projections shown in this report for Medicare do not represent a reasonable expectation for actual program operations in either the short range (as a result of the unsustainable reductions in physician payment rates) or the long range (because of the strong likelihood that the statutory reductions in price updates for most categories of Medicare provider services will not be viable).

Foster went on to point out an alternate report completed by his office which pointed out:

One of the most important factors in projecting Medicare expenditures are the annual payment updates to Medicare providers. The estimates shown in the 2011 Trustees Report are complicated substantially by mandated reductions in these payment updates for most Medicare services. In particular, Medicare payment rates for physician services as determined by the Sustainable Growth Rate (SGR) system are scheduled to be reduced by roughly 30 percent in 2012. For most of the other categories of Medicare providers, the recently enacted Patient Protection and Affordable Care Act (ACA), as amended, calls for a reduction in payment rate updates equal to the increase in economy-wide multifactor productivity. As described in more detail below, in our view the scheduled physician payment reduction is implausible and there is a strong likelihood that the productivity adjustments will not be sustainable in the long range. It is reasonable to expect that Congress would find it necessary to legislatively override or otherwise modify the reductions in the future to ensure that Medicare beneficiaries continue to have access to health care services.

In other words, that $500 billion dollars of Medicare Savings double counted in the “Obamacare” bill just “ain’t gonna happen,” just like most of what we have been told by the progressives about the president’s staple health care bill.

Eventually to pay for this trillion dollar overrun, Seniors will end up with reduced care. So it seems as if it is the Democrats who will be “pushing seniors off the cliff.”