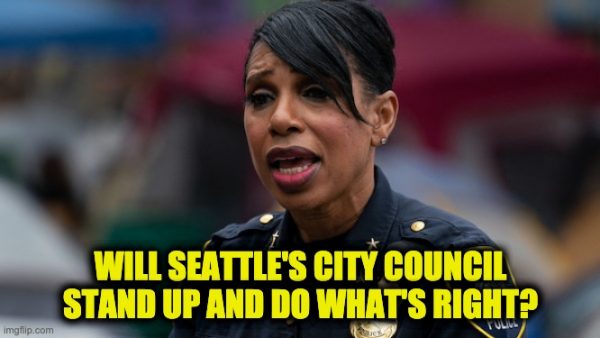 Seattle Police Chief Carmen Best’s home—in Snohomish County, miles away from her office in Seattle, King County—was the target of protesters over the weekend, and now the chief has sent a letter to the City Council. The letter basically told them to get off their butts and do something. It warned of the dangers of “mob rule” and urging the council to “forcefully call for the end of these tactics.

Judging how the Seattle City Council acted when Antifa took over part of the city last month,  Chief Best has a better chance of a unicorn showing up in her office than the city council taking a stand against mob rule.

The protest was met by Best’s neighbors in the quiet neighborhood, according to KCPQ News, who “buckled down and used their own vehicles to block the protesters from moving further down the street where Chief Best’s home is located.”

“You’re coming to a small community. We see all these peaceful protests getting hijacked in Seattle and Portland and other areas. It just takes one Molotov cocktail, takes one person trying to light something on fire, one firework going off. Then we now have a neighborhood in crisis. We feared that more than anything was having a crisis here in our neighborhood that we ultimately didn’t deserve.”

Best was reportedly not home at the time, but Snohomish County Sheriff Adam Fortney issued a statement that read, in part,

“The Snohomish County Sheriff’s Office has been supportive and accommodating to all peaceful protests that have occurred in our jurisdiction. With that said, protestors targeting one individual’s house is a bullying tactic that will certainly require an extra patrol response to ensure every resident in Snohomish County can feel safe in their own home, with their loved ones, no matter what they choose to do to make a living. If this group or any other group wants to protest the government, we would ask they do so at a government building and not at any individual’s private residence.”

As noted by MyNorthwest.com, “Demonstrators have been marching nightly in the Seattle area, previously stopping at homes of city councilmembers and King County Executive Dow Constantine.”

Here is the text of Chief Best’s letter to the council that she published on the department’s crime blog,

I wanted to update you on recent events, particularly those that occurred late last night.

A residence of mine in Snohomish County was targeted by a large group of aggressive protestors late last night. My neighbors were concerned by such a large group, but they were successful in ensuring the crowd was not able to trespass or engage in other illegal behavior in the area, despite repeated attempts to do so. Currently, the local sheriff (not SPD resources) is monitoring the situation.

I urge both of you, and the entire council, to stand up for what is right. These direct actions against elected officials, and especially civil servants like myself, are out of line with and go against every democratic principle that guides our nation. Before this devolves into the new way of doing business by mob rule here in Seattle, and across the nation, elected officials like you must forcefully call for the end of these tactics.

The events of this summer were initiated in a moment of grief and outrage over the murder of George Floyd by Minneapolis police officers and so many other Black and Brown people suffering at the hands of injustice. All of us must ensure that this righteous cause is not lost in the confusion of so many protestors now engaging in violence and intimidation, which many are not speaking against.

As if to make matters worse, on Friday, members of Seattle City Council proposed a plan to shrink the Police Department, including budget proposals will reduce the force by as many as 100 officers through layoffs and attrition this year.

Per the Seattle Times, the cuts are aimed at the department’s SWAT team, encampment-removal team and the mounted unit, appear to have enough support to pass. “Those moves and an accompanying resolution, stating the council’s intent to make more dramatic changes in next year’s budget and to create a new Department of Community Safety, could pave the way for sweeping changes in response to the Black Lives Matter protests that have surged throughout the city and across the nation.”

In other words, the liberal city council is trying to push Seattle to go to hell in a hand-basket.