Chicago Exposes The Moral Bankruptcy of the Democrat Party 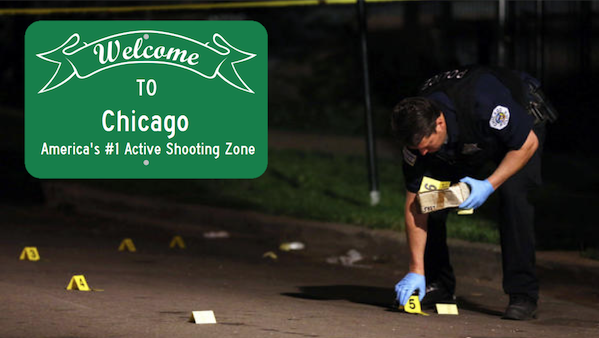 The City of Chicago is one of the most dangerous cities in America, there is simply no doubt. Last year there were a shocking 4,379 citizens shot and 716 shot and killed — and another 84 murdered by other means — in the city run by former Obama Chief of Staff Rahm Emanuel. Upon its conclusion, it was found that 2016 was the city’s bloodiest year in 60 years.

If that wasn’t bad enough, 2017 is already shaping up to be worse than last year. In the first two months of the year the city has already seen 512 total shootings with 98 killed plus an additional 5 murdered by other means. But according to the Chicago Sun-Times, February of 2016 ended with 187 shootings and only 43 murders.

Chicago isn’t just dangerous in the city’s worst areas, either. The Windy City’s trains are fraught with violence, there are roving gangs of teens attacking shoppers in the city’s shopping districts, there are attacks on joggers on the lake front, children being murdered, dismembered, and thrown in a city lagoon — all these incidents occurred outside the so-called “dangerous” areas of the city.

So, yes, Chicago is a terrible place for people to live. The Chicago Police and especially the city government have proven to be utterly worthless allowing citizens to be murdered and maimed by the thousands every year.

And the numbers of those leaving the city shows that at least some of Chicago’s residents know it. As 2016 came to an end, the Chicago Tribune reported that Illinois lost more residents in 2016 than any other state. And more to the point, Chicago lost more population than any other U.S. city.

But all this didn’t happen by accident. It happened because the city’s government is destroying the city and are doing so because the Democrat Party is evil.

And while it may at first seem trivial, two recent street sign decisions makes the evil of Democrats explicit.

The first street sign decision occurred in October of last year when the city council led by Mayor Emanuel began the process of removing the honorary street signs re-naming a portion of Wabash Avenue for Donald J. Trump.

The signs were erected after Trump built his tremendous Trump Tower in Chicago.

But as the last election campaign neared its end, the city council felt that during that campaign Donald Trump was too mean to deserve the honor of having a street sign named after him.

“His divisive comments about various segments of Chicago society, whether you’re Latino or another minority, an immigrant, a woman, that in and of itself is offensive,” 42nd Ward Alderman Brendan Reilly said last year. “But his decision to drag us into this campaign and mischaracterize and paint a very distorted caricature of Chicago is a mistake and we reserve these honorary street signs for special Chicagoans who have lifted up this city and move us forward.”

Some city fathers even tried to claim that Trump was a terrorist.

By December, only a month before Donald Trump took the oat of office to become our 45th president, the Chicago City Council removed the last of the Trump street signs.

This move to dump the Trump street signs may just seem like typical, petty, liberals acting like petulant children. But what the city did only two months later in contrast proves that liberals aren’t merely petty — which they are, of course — but are evil.

So, Trump’s signs were removed because Trump is a terrorist, he’s mean, he’s loud, and he’s a bad guy. OK, fine. There is much reason to feel negatively concerning Trump’s behavior. “Evil,” is an idiotic overstatement, granted, but Trump has done and said things that are easily disliked. Maybe he doesn’t deserve a street even though he is president of the United States.

But even as Trump’s signs were removed, early in February of this year the city decided to bestow an honorary street sign upon one Oscar Lopez Rivera.

Who is this Rivera fellow? Why, no less than a real terrorist. That’s right, Oscar Lopez Rivera is the man who founded the domestic terror group FALN.

The Puerto Rican separatist FALN terror group is responsible for killing six people and perpetrating some 130 bombings and terror attacks on U.S. soil between 1974 and 1983 all in an effort to get Puerto Rico to become an autonomous nation free of control by the United States.

Rivera was jailed for his terrorist activities but had his sentence commuted as President Obama prepared to leave office early this year. Since the commutation, twenty-sixth Ward Alderman Robert Maldonado decided to propose that a three-block stretch of North Luis Munoz Marin Drive be named after the terrorist. Naturally, the City Council moved quickly to approve the proposal.

Shockingly, the city approved the sign despite the plea from the son of one of Rivera’s victims.

Joe Connor, the son of Frank Connor who was killed by a FALN bombing in 1975, was disgusted by the city’s move and published an op-ed int the Chicago Sun-Times to plead for the city to deny the honor to the terrorist.

“He is a sworn terrorist,” Joe Connor said. “He was convicted of bombings in Chicago that did injure people. He tried to escape from prison with machine guns and plastic explosives where he was gonna kill the guards. … And Chicago is gonna put up a sign in his honor?”

“The idea that people will walk by and see this street sign and think that Oscar Lopez was some sort of great person — it’s diabolical,” Connor said. “The world
is upside down here. What’s next for Chicago, bin Laden Boulevard? Charles Manson Court? This is worse than a disgrace. It is sinister. It’s a direct insult to my father’s life.”

Worse, Rivera has never once renounced his past terrorist actions. But the city named the street after him anyway.

So, let’s recap: Rahm Emanuel and his quislings removed a street sign honoring the president of the United States because he’s a bad guy, but raised a street sign to a real, unrepentant domestic terrorist who is responsible for the death of Americans and the injury of dozens more because… wait? He’s a good guy?

This proves decisively that Democrats are immoral monsters. They are celebrating a real, unrepentant terrorist while calling a man whom they merely disagree with politically a terrorist.

This is the modern Democrat Party writ large.

Finally, I have to note that the suburbs surrounding Chicago are no better. In the lily white, rich northern suburb of New Trier Township, the local high school is holding a civil rights seminar day where all the white kids will be told they are bad people merely because they are white and will be exposed to radical “speakers” who will teach them that the U.S. is and always has been an evil country. And even after a special school board meeting to discuss this “civil rights day” which was called after the controversial ideas were made public, the seminars are still set to continue.

This is all due to the unethical, corrupt, and moral bankruptcy of the Democrat Party.