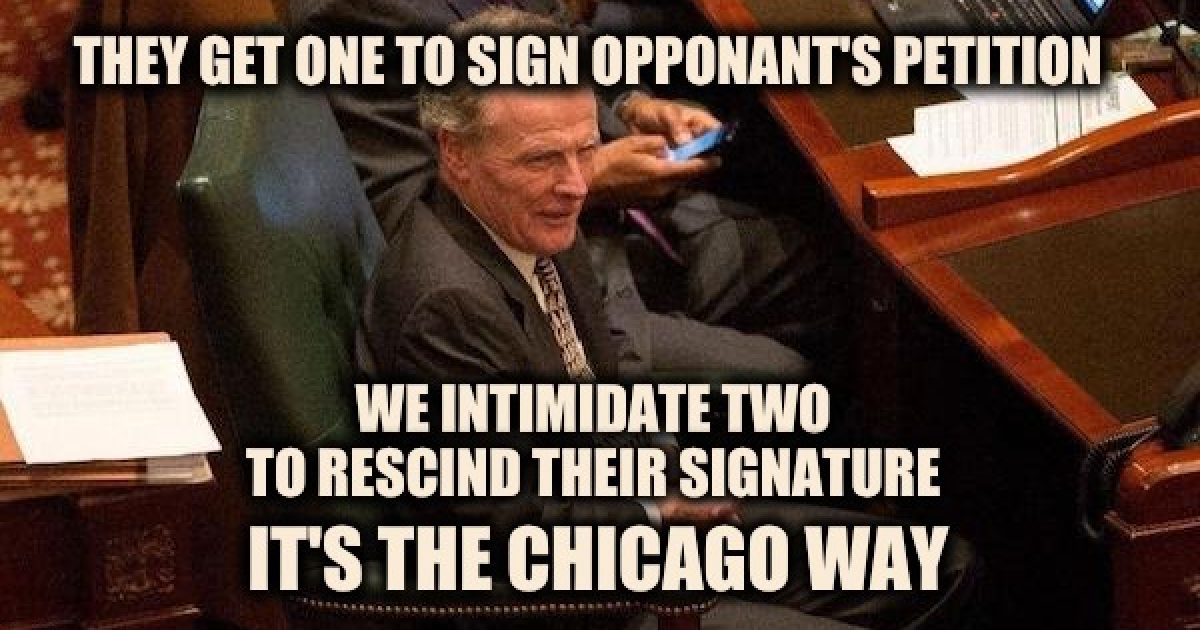 A DePaul University student is getting a big lesson in election fraud the Chicago Way. His name is David Krupa, 19, a freshman studying political science at DePaul, who drives a forklift part-time. David is running to be the 13th Ward alderman. Giving the lesson is the speaker of the Illinois House of Representatives Michael J. Madigan, who runs the state’s Democratic party with an iron fist, which is why he’s known as Boss Madigan

Krupa is technically running against incumbent Alderman Marty Quinn,  who is backed by Madigan. And while Krupa got more than triple the signatures needed to get on the ballot, he says someone went door-to-door in the Far Southwest Side ward to ask residents to sign forms revoking their support of his candidacy.

In total, 2,609 people said they rescinded their support of Krupa— around 1,000 more than signed on to support him in the first place.

“I think they were bullied, harassed. Some even strong-armed or intimidated,” Krupa said.

I think that someone in boss Madigan’s office is lousy at math.

Krupa is appealing the challenges in an effort to get on the ballot and claimed victory Sunday after his first hearing in front of Board of Elections commissioners. Another hearing is set for Saturday. The DePaul freshman is studying political science and economics but says this experience is teaching him more about politics than any class could.

Even worse Krupa is getting threats straight out of a mobster movie, “Some say that they don’t want to see anything bad happen to me. Some say ‘you’re a nice kid. You’ve got a bright future. I don’t want to see you get hurt,'” Krupa said.

Michael Dorf, who is representing David Krupa called the case, a “clown car of felonies:”

“You know the 13th Ward better than I do,” Dorf said. “This is clown school and election fraud. This is going way, way beyond the line. David is a huge underdog. Go ahead and beat him on Election Day, or do subtle fraud, like taking away yard signs, but when this number of false affidavits are filed, you’re talking fundamental fraud, epic fraud.

The elections board meets on Saturday to hear the case, attorney Dorf said that he will ask the elections board to the matter to Cook County State’s Attorney Kim Foxx. Krupa better hope for a positive result with Ms. Foxx, because if they have to take it up a level to the current State’s attorney general…well…her name is  Lisa Madigan, her father is Boss Madigan. Lisa Madigan leaves office in the middle of January 2019, but the new AG Kwame Raoul received a million dollars in campaign money from Michael. Madigan-controlled sources.

That is the Chicago Way.